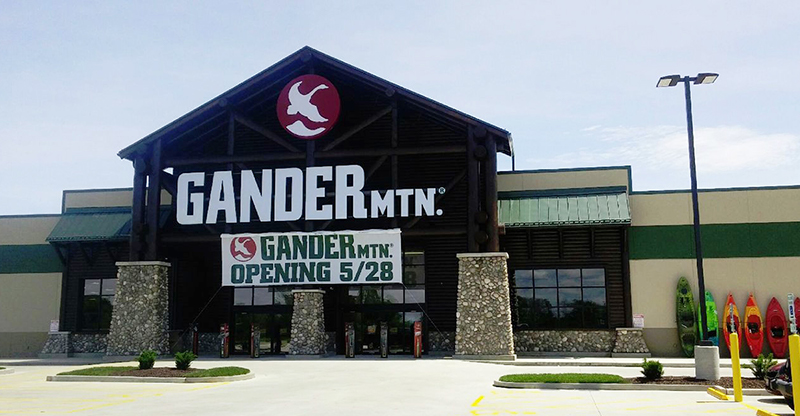 NAI DESCO negotiated a transaction on behalf of developer Darrell Shelton that brought another large retailer to Southwestern Illinois in 2015, benefiting local shoppers and merchants alike. Gander Mountain retail store opened in May at Central Park Plaza near Green Mount Road in O’Fallon, Ill.
Gander Mountain is the nation’s largest retail network of outdoor specialty stores for shooting sports, hunting, fishing, camping, marine, apparel and outdoor lifestyles. Based in St. Paul, Minn., it now has 162 stores in 27 states. The new store is a 61,000-square-foot stand-alone building, which is the company’s largest prototype.
“The company chose the Central Park Plaza site because of its ideal location as a regional destination that is projecting substantial growth over the next several years and into the future,” says David Wittenauer, vice president of NAI DESCO. “Exit 16 at Green Mount Road in O’Fallon and Shiloh has developed into a natural stopping place for commuters traveling from Marion, Carbondale, Mount Vernon and beyond as they come to the St. Louis area for health care, sporting events and other activities.”
Gander Mountain seems very pleased with the location and success of the store, says Wittenauer.
“It is drawing customers to Central Park Plaza that wouldn’t be in the area otherwise. As a result, many surrounding businesses have told me they are seeing an increase in sales,” he said.
Presently, a new CarMax is under construction near Gander Mountain and will open in 2016, which will add to the success of the area.
NAI DESCO, marketer of land and retail/office space, foresees more growth in the Green Mount Road/Interstate 64 corridor: “The anticipated opening of two hospitals, Memorial Hospital in 2016 and St. Elizabeth’s Hospital soon after, will further enhance commerce in the area,” says Wittenauer. “There are ideal sites available for medical, restaurant, office and retail developments with close proximity to the hospitals.”
NAI DESCO is the St. Louis regional partner of its umbrella company NAI Global, one of the world’s largest real estate companies with 400 offices worldwide. The local NAI DESCO team of 24 brokers combine their connections, resources, and knowledge of the Metro East market to offer a wide range of opportunities and exposure for clients.