By ALAN J. ORTBALS
Kunkel Commercial Group landed two of the largest office projects in Southwestern Illinois in 2015: the Green Mount Road Professional Building in O’Fallon and the Park Street Plaza in Edwardsville. Kunkel will be the leasing agent for both and will manage both upon completion. 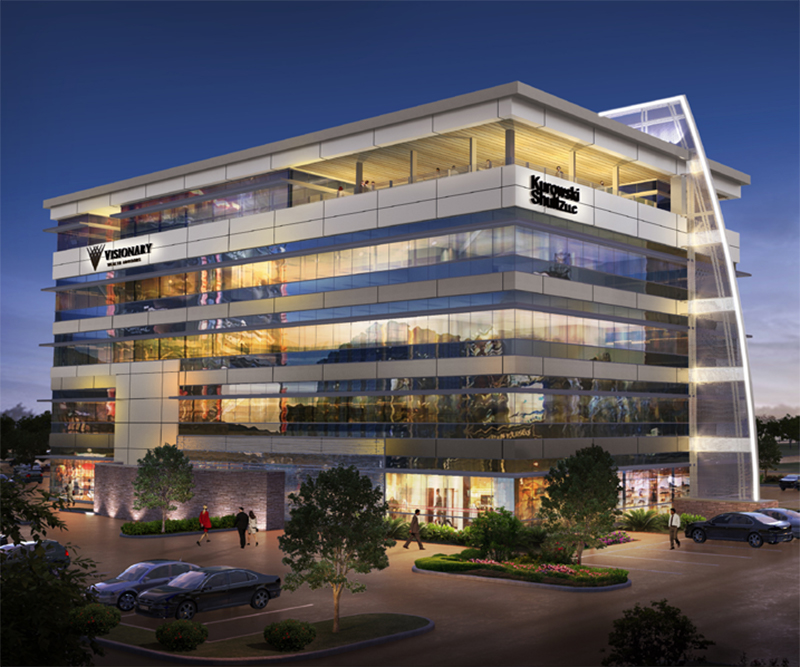 Plocher Construction Co. broke ground on the 1405 Green Mount Road building in April 2015. The $18 million, 60,000-square-foot building is expected to be completed by June 2016. Kunkel said that it is 60 percent pre-leased. Visionary Wealth Advisors will be taking the fifth floor. Visionary Wealth is a growing wealth management firm currently in Edwardsville, St. Louis, and Miami, Fla. serving individuals and businesses with investments and comprehensive financial planning.
The third and fourth floors will be taken by the law firm of Kurowski Shultz, LLC, a civil litigation firm representing clients ranging from individuals to Fortune 100 companies. It’s currently located in Swansea and specializes in complex toxic tort cases, product liability, class actions and government affairs.  The firm was founded by John Kurowski in 1986 and has grown to one of the largest in Southwestern Illinois.
Kunkel is seeking tenants for the first and second floors. He said there were several restaurants that had expressed interest in the first floor space and the second floor would be ideal for a variety of professional office uses. The first floor space is being offered at $28/square foot on a full service lease and the second floor at $27/square foot, full service.
Kunkel also is the leasing agent and will be the property manager for Park Street Plaza in downtown Edwardsville that Plocher Construction Co. is building. The five-story, 45,000-square-foot building won’t be ready for occupancy until December 2016 but already has two tenants signed up.
Madison Mutual Insurance Co. will be moving its operations into Park Street Plaza to occupy the third and fourth floors. And, a new restaurant, Crushed Red, will be taking most of the first floor. The 3,373 square feet remaining on the first floor is being offered at $26/square foot NNN, and the second and fifth floors are being offered at $27/square foot full service. Kunkel said several law firms had expressed interest in the upper floor office space.