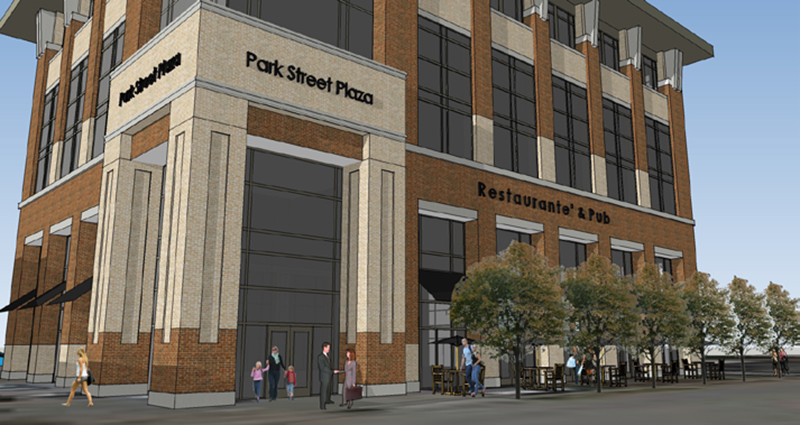 Ground was broken in November 2015 on the $13 million Park Street Plaza development at the corner of Park and Buchanan streets in Edwardsville. The five-story, 45,000-square-foot building is expected to be open for business by Dec. 1, 2016, according to Scott Plocher of Plocher Construction Co., the project’s builder. It’s being developed by Park Street Plaza, LLC, a partnership of Plocher and local attorney, Christopher Byron, principal in the firm of Byron Carlson Petri and Kalb, LLC.
When the building opens next year it will be the new corporate headquarters of Madison Mutual Insurance Co. Madison Mutual dates back to 1920 when it began operations as the Madison County Mutual Automobile Insurance Co.  It now operates in Illinois, Missouri and Wisconsin and its corporate offices are located on approximately 25 acres it owns on Illinois Route 157 in Edwardsville.
Madison Mutual will occupy the second and third floors of the Park Street Plaza and a new restaurant, Crushed Red Urban Bake and Chop Shop, will lease about 5,000 square feet on the first floor.
Crushed Red currently operates a restaurant in Clayton, Mo. The eatery specializes in chopped-to-order salads and hand-stretched pizzas and boasts that it produces zero waste.
Kunkel Commercial Group, leasing agent for the property, is actively seeking professional office tenants for the fourth and fifth floors as well as an additional tenant to fill out the retail and office space on the first floor.
Scott Plocher said that fears of environmental contamination were unfounded as the majority of the underground storage tanks from the old McLean Auto Repair had been removed previously. Tax Increment Financing funds are being used to defray the cost of demolition and environmental remediation.
“Park Street Plaza will be a great addition to Downtown Edwardsville,” said Byron. “The city of Edwardsville, Mayor Hal Patton, the City Council and his staff all stepped up and worked with our group to ensure the project would happen. They provided a TIF agreement and they’re collaborating with our group to assist us in alleviating any parking concerns for the project.”
A new LLC that includes Byron, Plocher, Kevin Jones and others will be buying the Madison Mutual property on Illinois Route 157 with plans to develop a 150,000-square-foot lifestyle shopping center with a grocery store and six out lots. Byron said he expects to be able to announce the project and name the initial tenants for that property in early 2016.