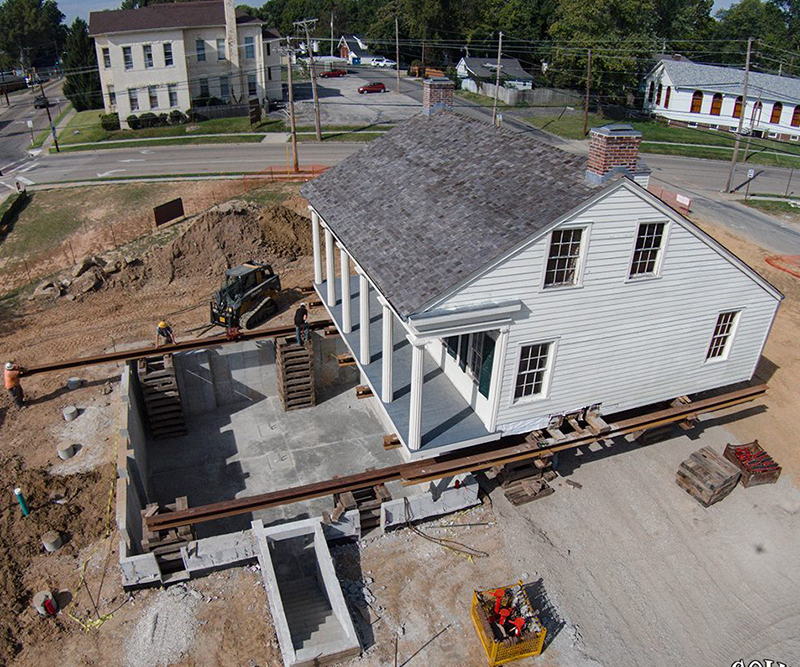 COLLINSVILLE — Transformation of a key entrance to the Uptown area is underway and should be completed early in 2016.
The city is creating Collins Park, a new community gathering place at the corner of Main Street and Combs Avenue. The focal point of the park will be the city-owned D.D. Collins House.
The city demolished the Martha Manning Warehouse and Main Square Apartments properties last May to make way for the move of the Collins House in September. The house was moved from its location on Main Street about 200 feet to where it now sits. The project has been rapid.
“We are on track for everything to be complete by the first of the year, interior, exterior, the park components — everything but the painting of the house,” Uptown Coordinator and Interim Economic Development/TIF Director Leah Joyce said at year’s end.
The home will eventually be open by appointment through Friends of the D.D. Collins House, a 501 (c)(3) organization formed to preserve and support the Greek revival home built in 1845. The home was built by Daniel Dove Collins, a Madison County judge (from 1853 to 1857) and the first president of the Collinsville Village Board.
The home will serve Collinsville residents, young people and tourists with informational displays, educational programs and interpretive gardens, utilizing native plantings.
The dedication date has not yet been set.
Those interested in joining the Friends group may contact President Lavadna Hines at (618) 420-0288.
The land remaining after the creation of the park will be marketed to developers for new residential or mixed-use development.
Collinsville saw major progress on another front during 2015, that being a spec building being constructed by The Maune Company in Eastport Plaza. Maune broke ground Oct. 21 on its third building there, a 53,417-square-foot, tilt-up industrial building at 1607 Eastport Plaza Drive. The building is already more than 50 percent pre-leased. A fourth building is being proposed and is in the planning phase.
The scheduled completion date for the current project is the first quarter.