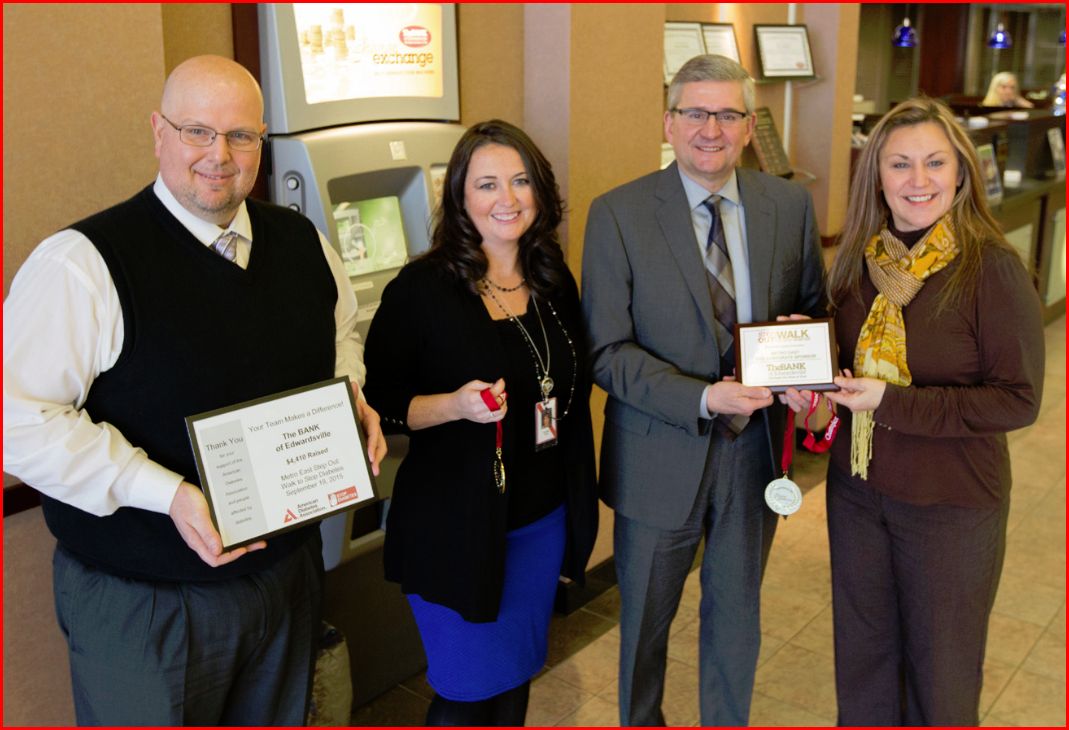 American Diabetes Association-Metro East Manager Rawnie Berry, right, presented the Bank of Edwardsville with plaques and medals Monday, Jan. 4, at the Main Office in Edwardsville for its support of the 2015 Metro East Step Out: Walk to Stop Diabetes. Representing the bank, from left, are: Bill Yarbrough, community relations/communication coordinator; Danielle Smith, vice president of human resources; and Kevin Powers, president and CEO.

EDWARDSVILLE – The Metro East Step Out: Walk to Stop Diabetes, which took place at Southern Illinois University Edwardsville on Sept. 19, 2015, was again a great success, and the Bank of Edwardsville is getting a share of the credit.

The fund-raising event was attended by residents, students, and businesses from nearly every county of the Metro East. Sponsors, donors and walkers raised $158,090.30 – making the walk the fourth-most successful in the nation in terms of exceeding the $125,000 fund-raising objective set by the American Diabetes Association.

“The Bank of Edwardsville contributed significantly to the success of the 2015 Metro East Walk to Stop Diabetes. Leading up to the walk, they displayed our brochures inside branch offices, providing much needed exposure throughout all of its locations. At the walk itself, bank employees manned The Bank of Edwardsville food tent, providing the tent, water, and granola bars served to participants. Not only was the bank a $5,000 Platinum Sponsor, but its Corporate Walk Team made up of 30 staff members and their families raised $4,410. Kevin Powers, president and CEO of TheBANK, and Danielle Smith, vice president of human resources, each raised $1,000 or more to earn the title of Walk Champions,” said Rawnie Berry, American Diabetes Association-Metro East manager.

“Our entire organization is extremely proud to help support the American Diabetes Association,” Powers said. “Chances are each of us knows someone whose life is complicated by diabetes. By sponsoring and raising money for the Metro East Walk to Stop Diabetes, we can help the ADA fulfill its mission and fund research in the fight against this disease.”

The American Diabetes Association funds research to prevent, cure and manage diabetes, hosts summer camps for children with diabetes, provides objective and credible information, and gives voice to those denied their rights because of diabetes. To volunteer, make a donation to, or sponsor the 2016 Metro East Step Out: Walk to Stop Diabetes, which will again be held at SIUE in September, call Rawnie Berry at (888) 342-2383 ext. 6829.