IBJ: Lindenwood University has done an amazing job of taking a vacant, former high school and turning it into a vibrant center of higher education. How did that happen? 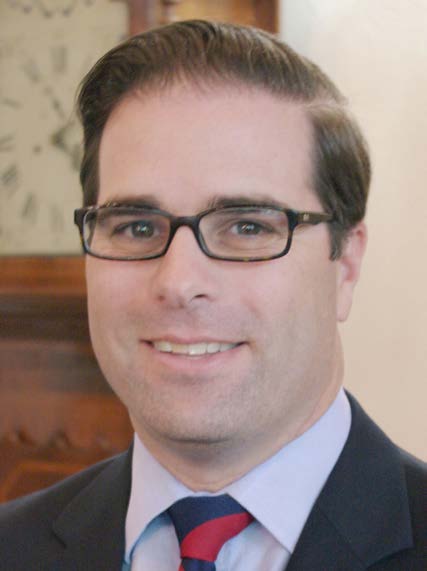 Barger: It’s something that we know and do well. Through my years at Lindenwood I’ve gotten two or three calls a year from cities both locally and even nationally asking us to come to their community. Occasionally we would go out, do our due diligence and see if it made sense to open an extension site just for our evening programs. Belleville represents a completely different concept. We had a strong base here and about five years ago decided to make good on a commitment we made to those original Belleville leaders who asked us to come to town and have a day college. In that short amount of time we’ve gone from nothing to about 1,400 total students.

IBJ: Where do your students come from?

Barger: We have students coming from 39 different states and over 40 different countries. A common question around here is, where are you from? I was in the hallway today and I saw a girl I knew from her first day here. She was from Oakland, Calif., and I asked her what she thought of the Midwest. She said, “It’s neat, my parents and my aunt came with me and they all said I think we need to sell the house in California and move to Belleville.’ I was at lunch yesterday and met another girl from the Bay Area. I asked her if she knew the other student from the Bay Area and there was a boy walking by and he was also from the Bay Area and they went to rival high schools. How does that happen at a school like Lindenwood in Belleville? We get people from all over and it’s part of the excitement of what we do here — the diversity of cultures, the socioeconomic diversity, the racial diversity. This place is an amazing melting pot.  They’re really, really bright students, too.  Now they’re taking internship positions in the city and the surrounding cities. They’re coming to love the city and the state and, in some cases, this country.

IBJ: Do you have enough room to maintain this growth?

Barger: When you look at the footprint of Lindenwood-Belleville it includes the two neighborhood areas where we’re expanding. We’ll undoubtedly add buildings to this footprint. We’ll probably add another dormitory in the next two years on Main Street. It’ll look a lot like the new one that we just built last year. The Lindenwood system will be 200 years old in 2027 and that’ll be right at about Lindenwood-Belleville’s 25-year anniversary so the whole system is looking at where we want to be by then.

IBJ: What’s the secret to your success?

Barger: When people ask how we get students from other countries or far away states, my simple answer is that we do everything that we can to take care of the students that are here. When we do that, invariably there is a boyfriend, a girlfriend, a brother, a sister, a friend that says, ‘That sounds pretty good, I think I’ll come, too.’  And that tends to grow those populations. The simplistic answer is to focus on students and take care of them and deliver something that they’re looking for in the educational experience in the larger sense. When you do that, good things come from it.

IBJ: Does Lindenwood use extracurriculars to attract students?

Barger: Absolutely, that’s part of it. Those amenities are important for sure and we have a wide offering of things for students to do. I think the region helps us a lot, too. When you come to Lindenwood-Belleville you have an amazing list of things to do in Belleville — the fairs and the events that the cities hold. And you’re a train ride away from the Art Museum, the Zoo, the Science Center — all of those things that larger metropolitan areas have to offer. You have a very personalized small-school experience here with all of the things a major metropolitan area has to offer.

IBJ: How are you drawing international students to Lindenwood-Belleville?

Barger: We still have something in this country that’s very inspiring. The energy and the positive outlook on the future, on life and on careers are things that they like. It’s funny because some of them have told me that when they go home, they hear from their friends and families that they’re so American now. They take on a lot of the virtues and qualities of being American. It becomes part of them and they see that as a very positive thing.  They adapt very quickly and they really like to be here. I was at a conference the other day. A politician was talking about immigration and he said we should hand a green card to every foreign graduate who walks across the stage and keep that talent here. Most all of them would like to stay and work here. They are super talented. I’m not an elected official and it’s not my decision but it’s an interesting idea.

IBJ: Your growth has created some problems with the neighbors in terms of off-campus student housing. How is that coming along?

Barger: The Zoning Commission approved it 6-0 and the City Council by a vote of 11-5. There were some very good things to take from it. There were some stipulations put on the approval so the very next day after that City Council vote we went around and started to make our work list. Many of the houses we bought over the summer, and we had added kind of the Lindenwood touch to them. One of the themes that came through in the process was people were saying that Lindenwood’s houses are some of the nicest ones around. We invest between $10,000 and $30,000 in every house that we purchase. Someone noted that on every house that we own we put a “Property of Lindenwood University” sign on the front. In their college experience, they said, the college would never have owned up to claiming those houses that they owned because they weren’t something to be proud of.  We purchased a good number of houses this summer to meet with increasing population. It takes time and money to add our touch to all of them and bring them to our standards, but we’re proud of the houses that we have.

IBJ: Does Lindenwood have a positive impact on the community beyond the campus?

Barger: We purchased a number of sort of hot spot properties that city officials, the residents and the police would tell you were constant sources of problems. We purchased them, invested in them, cleaned them up and we put college students in them. Guess what: Those problems went away.  And one of the things that I wish would have come out more is the amount of time that our students spend in the community. They are constantly in the community volunteering for cleanup programs, and non-profits.

Barger: No. It’s something that I would promote and it’s important to me but it’s entirely student-driven and that’s exciting. They want to do more giving back which is great because these young people already get it — that giving back to the community is just part of how you live. I have students coming in every week and saying they want to do this or that to help in the community. So, instead of me saying, hey this is who we will be, they’re coming in and saying, “This is who we want to be,” and I absolutely love it.

IBJ: How is the Collinsville branch working out?

Barger: Collinsville is great for us. We can offer our accelerated evening programs so working adults can come in and attend classes one night a week from 6 to 10 p.m. They get through 36 credit hours in a year which is extremely fast. They can finish a bachelor’s degree in just over three and a half years attending in the evening one night a week.  It’s a hugely popular program. The city of Collinsville has welcomed us and the citizens have responded to it. It’s a wonderful location with great visibility, right on the interstate and it has exceeded our expectations in terms of growth. We find that non-traditional students generally prefer to take classes near where they live rather than where they work so it’s a great site for people who maybe work in St. Louis and are on their way home. It’s really been a good addition for us.

IBJ: You’ve only been here at the Belleville campus a few months. What are your impressions?

Barger: One is the energy that I’ve felt from our students, faculty and staff. Also, all the development that’s going on in Belleville right now with the project out by the Shrine and with new neighborhoods coming in. There’s just so much going on in the community and in Southern Illinois. When you have students from all over the world and all over the country saying that you’re doing something good and more of them want to come, it’s a wonderful thing. We’ll keep working to accommodate them and continue to grow.