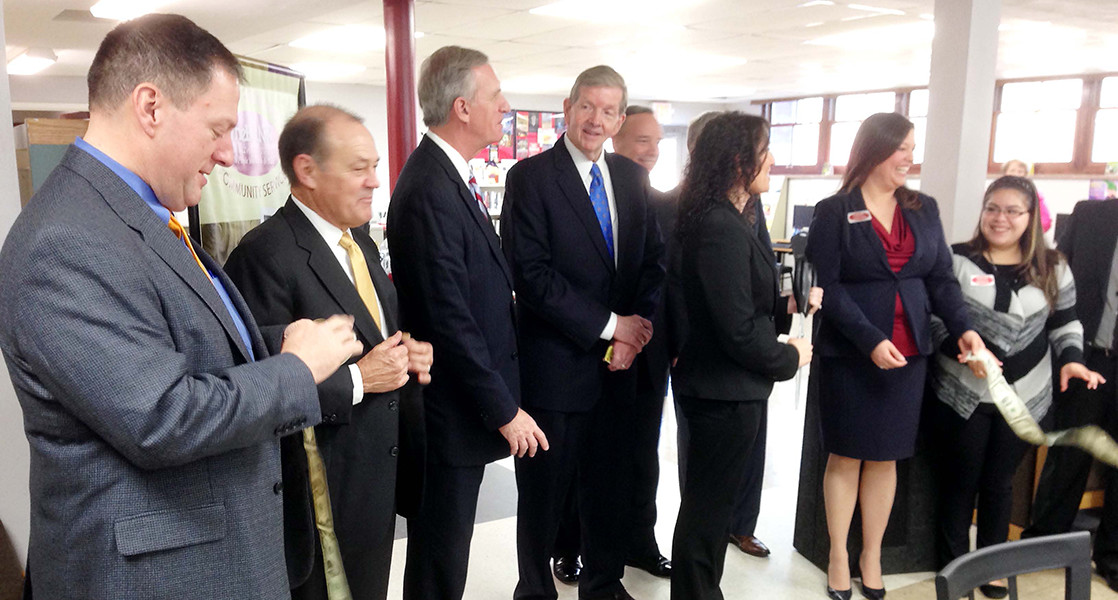 By DENNIS GRUBAUGH
FAIRMONT CITY — The Bank of Edwardsville has begun a new “chapter” with the Hispanic business community by debuting a couple of area firsts — a financial facility launched in a local library and one that offers staff fluent in Spanish and English.
At least one Hispanic business expert says the bank has made a shrewd decision.
“One of the things I’ve said to all of our member banking institutions is that whichever bank figures out how to work with the Hispanic population, which is the most untapped population, will win the game. It makes economic sense,” said Karlos Ramirez, executive director of the Hispanic Chamber of Commerce of Metropolitan St. Louis.
Rob Schwartz, senior vice president of retail banking, said the facility at 2870 N. 44th St., is believed to be the first bilingual banking branch in all the St. Louis area.
The community of choice is significant: Fairmont City has the largest Hispanic population in Southwestern Illinois. Split between Madison and St. Clair counties, some 71 percent of its population stems from Hispanic descent, according to references. The population overall stood at 2,542 in 2013.
Schwartz said the bank began looking about two years ago to better serve the Hispanic market  as part of a larger effort to bring financial services to historically underserved populations. That’s when bank staff found the available space inside the fledgling Fairmont City Library Center, which is becoming a hub for the community.
The Mississippi Valley Library District was still in the process of converting the facility after obtaining the former post building of the local American Legion in 2008. The library’s layout was stymied because several walls were in the way.
The bank’s general contractor, Holland Construction Services of Swansea, remodeled part of the location for the bank’s use but also knocked down some interior walls on the library side.
“This opportunity with the bank opened up the whole building,” said Katie Heaton, the branch library manager.
The library offers children’s programs, adult education and access to technology. The library’s mission dovetails nicely with a bank that stresses being involved in the community.
“This is a true perfect fit for us,” Schwartz said.
The location is the bank’s 20th banking center. It is considered a full-service facility that offers retail services such as checking and savings accounts, mortgage loan products, commercial loan products and investment services.
“It filled a gap we had in our community,” Police Chief Scott Penny said, adding that it took foresight on the part of several people in and outside of town. “The fact that it’s bilingual and provides educational programs to people who might need some good sound advice on banking and how to do finances (is important). We’re very excited about the bank and think it’s a wonderful additional to our small but very proud community.”
Sandy Smith was given special credit. She joined the bank about three years ago and has been instrumental in urging the bank to do more for the Hispanic community. She helped design a loan program for low- to moderate-income individuals called the My Community Home Loan.
Chairman of the Board Robert Plummer said the bank wants to do more with Community Reinvestment Act lending such as will be the case in Fairmont City. The act is a federal program that encourages financial institutions to help meet the credit needs of the local communities in which they are chartered.
“We have 375-400 employees who are dedicated everyday to doing what’s right by the customer,” he said.
The Fairmont City Center lobby is open Monday through Friday from 10 a.m. to 6 p.m. and on Saturday from 9 a.m. to noon.
Ramirez said Hispanics represent the fastest-growing population in the market. The city of St. Louis saw a 59 percent growth in the 2010 Census; in the county it was 72 percent; and in the state of Missouri it was 79 percent. However, in the entire metro, which would include Fairmont City and the rest of Metro East, the growth was 82 percent.
The updated, 2013 Census showed another 10 percent growth in the metro area, he said.
“The livelihood and the work ethic of the Hispanic population I would easily put up against anybody’s. People are  buying houses. People are banking. When you have a bank that looks like me and can speak like me it makes it a lot easier and more comfortable to go and bank there,” Ramirez said.
The Hispanic population considers it is important to have allies in business that are looking to tap into the Hispanic workforce, Hispanic buying power or to fulfill supplier  diversity initiatives.
“Half of our members are non Hispanic-owned businesses, he said. “As a chamber we’re looking to connect people together.
“The Hispanic chamber has grown 70 percent in membership in the last five years. We’ve recently learned there are more than 2,000 Hispanic-owned businesses in the St. Louis metropolitan area. We have about a tenth of that (in members),” Ramirez said.
Contractors included: Hurford Architects, Louer Facility Planning for furniture design, J.F. Electric, Franz Mechanical for the HVAC and plumbing and DeMond Signs for the exterior and interior signage

Five members of Sandberg Phoenix are now shareholders. The firm serves clients in both Missouri and Illinois.
The new shareholders for the 2016 fiscal year are:
– Thomas Addis, a member of the Business Practice Group.
– Nicole Larch, a member of the Health Law Practice Group.
– Stephen Murphy, who focuses his practice in the areas of business litigation and insurance law.
– Sara Obermark, who focuses primarily on medical malpractice litigation and business litigation.
– Nick Van Deven, who formerly served the firm as counsel and handles a variety of litigation matters at both the trial and appellate levels in Missouri, Illinois and the federal system.