BELLEVILLE – The Realtor Association of Southwestern Illinois says St. Clair, Monroe, Clinton and Randolph counties reported an increase in year-to-date home sales in September 2015 compared to September 2014. The report was released at the end of October.

“The Metro-East housing market has a lot of encouraging trends going on right now,” said Doug Payne, president of the Realtor Association of Southwestern Illinois. “We are hopeful that these trends will continue throughout the rest of 2015. Experts, such as the Regional Economics Applications Laboratory at the University of Illinois, stated that forecasts are anticipated to see positive year-over-year growth as well as moderate growth in home prices for October, November, and December of this year. The National Association of Realtors latest Housing Pulse Survey also indicated that the majority of Americans surveyed believe that buying a home is a good financial decision, and 68 percent said that now is a good time to buy a home.” 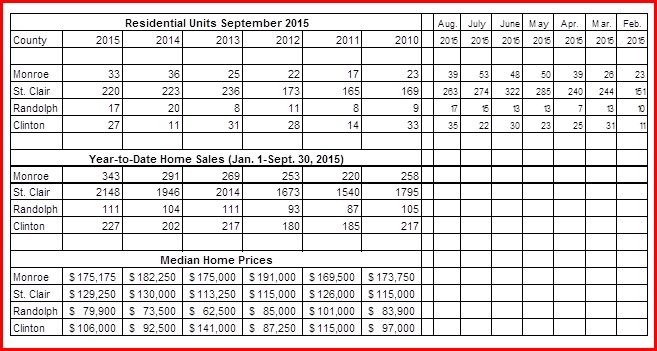