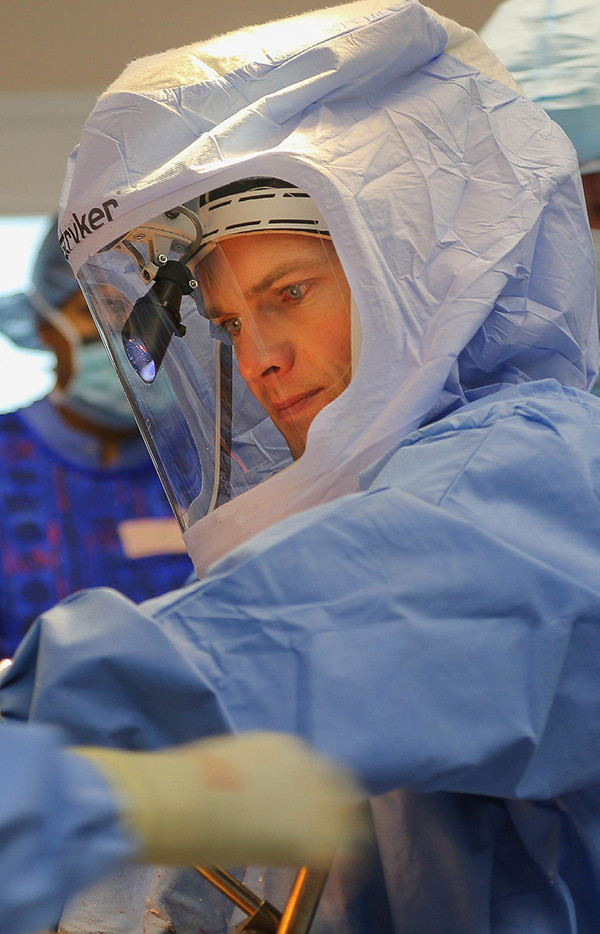 If you think that having your hip replaced and going home the same day could only occur in a science fiction movie, you’d be wrong. Patients are doing just that at Alton Memorial Hospital.
Dr. John Stirton, M.D. is medical director of the total Joint Replacement Center at Alton Memorial. A graduate of the University of Texas Medical School, he completed his orthopedic residency training at Michigan State University. In addition, he completed advanced training in the specialized hip procedure at Lennox Hill Hospital in New York City with Dr. Jose Rodriguez and Dr. Amar Ranawat, world renowned surgeons and leaders in the field of hip replacements.
The method Stirton uses is called the direct anterior approach hip replacement. It’s a minimally invasive procedure that replaces the hip without having to cut any muscle. The technique makes for a quicker recovery, less post-operative pain and an earlier discharge from the hospital.
“Many patients are getting up and walking the halls the day of surgery and leaving the next morning,” Stirton said. “Some patients can even leave the day of surgery after a hip replacement.”
The key is in not cutting muscle. Stirton explains that there are multiple muscles that lie together across the hip. Locating the natural interval between those muscles and simply spreading them apart rather than cutting muscle fibers is far less traumatic for the patient and results in less pain and an easier and quicker recovery.
“People want to recover faster; they want less pain; they want improved functionality; and they want it quickly,” said Stirton.  “It’s never going to be instantaneous but we’re getting better and better with modern techniques and some of the unique methods that I’ve employed are achieving that. We’ve had excellent success and patients have been extremely satisfied.”
In the past, artificial joints could be expected to last 15 to 20 years before they wore out and had to be replaced again. But there have been dramatic improvements in this technology as well, according to Stirton.
He uses a titanium stem with a polyethylene or plastic insert to the cup and a ceramic head. Stirton said he believes the ceramic head is the best material available today. He expects these hip replacements to last much longer than previous ones but, he said, how long they will last has yet to be determined.
“They are not biologic materials and they don’t regenerate themselves the way the cells of our bodies do,” Stirton said. “They’re metal, plastic and ceramic so there is a finite lifetime for these implants. Data from mechanical studies in the lab in which they try to mimic the movements of a patient’s body show these materials are lasting up to five times longer than the previous materials. I don’t think that it directly correlates but I usually tell folks that if all goes well, they can expect their joint to last 25 to 30 years, if not longer.”
Stirton says there are two factors that generally determine if you’ll be a candidate for joint replacement. One is genetics. The other is environment.
“A lot of people in our area work hard, physical labor and really beat up those joints,” Stirton said. “I see a lot of patients who are developing joint breakdown and arthritis earlier in their lives, sometimes because of the work that they do.”
Stirton said that surgery, however, is just part of the story. He’s also working to improve the overall experience and make it as smooth and anxiety free as possible for both the patient and their family. That means pre-operative care, joint replacement classes, patient education, and good follow up to make sure they are getting the appropriate therapies — seeing them all the way through the full process.
“I have had the good fortune of training at some of the finest replacement centers in the country; this has allowed to bring that experience to our hospital here in Alton.” Stirton said.
One satisfied customer is Alton Memorial’s manager of surgical services, Angie Henry. She said that Dr. Stirton recently replaced her 84-year-old
mother-in-law’s hip. After just a week
and a half of physical therapy, she went back out to her farm where she lives alone and had no trouble climbing stairs or walking out to the barn. That’s just one example but Henry gets to see similar results every day.
“There’s nothing quite as satisfying,” Henry said, “as coming to work; prepping a patient for surgery; seeing them go in; and then seeing them up and walking around before I leave at the end of the day.”