ALTON — With the support of Simmons Hanly Conroy Chairman John Simmons and firm employees, the Metro East Chapter of the American Diabetes Association’s 2015 Step Out: Walk to Stop Diabetes raised $158,090.30 to benefit diabetes programs in the St. Louis metropolitan area. This year’s fund-raising amount exceeded the walk’s goal, making it one of the most successful in the nation.
“We can’t thank John Simmons and the staff of Simmons Hanly Conroy enough for their gracious support of the Metro East Step Out: Walk to Stop Diabetes,” said American Diabetes Association Metro East Manager Rawnie Berry. “The firm has long been a supporter of the Metro East Walk as a Presenting Sponsor and Corporate Walk Team.  For the past several years Chris Levy, Kim Galanti, and Liz Whitehead have raised over $1,000, earning each the title of ‘Walk Champion.’ The fund-raising success we have achieved year after year has a lot to do with the firm’s unwavering support.” 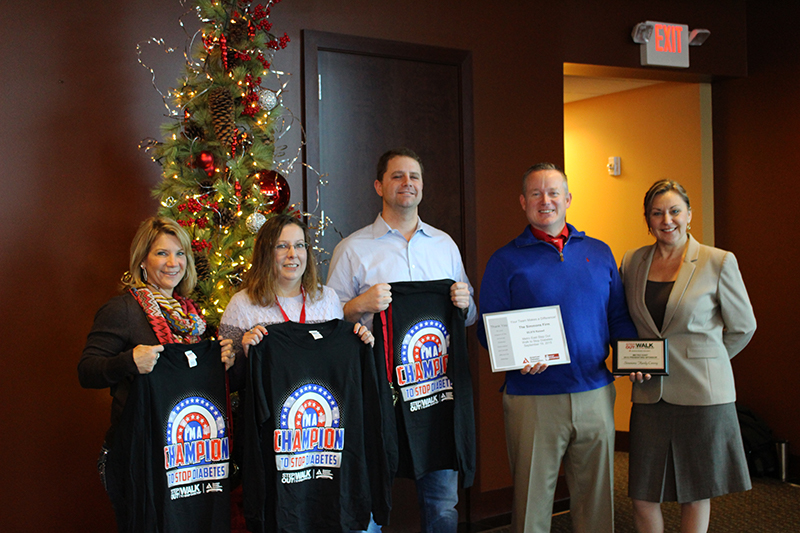 More than 680 people walked in this year’s event, with 124 teams aiding in fundraising efforts. The firm’s team, led by mesothelioma attorney Chris Levy, raised nearly $6,000 to benefit diabetes research. Berry recently presented John Simmons with a plaque and Chris, Kim, and Liz with champion T-shirts and medals, to recognize their contributions to the 2015 Walk to Stop Diabetes.
“It’s great seeing so many people in the community rally around a cause,” Simmons said. “Some of our own firm employees have diabetes, so being a part of this event really means a lot to us. Thank you to everyone for their hard work in helping to find a cure.”
More than 29 million Americans suffer from diabetes, and 8.1 million people are unaware that they have the disease. Nearly 100 people lose their lives to this disease every day. According to the ADA, if trends continue, 1 in 3 adults will have diabetes by 2050. Funds raised at the event stay in the St. Louis metropolitan area and help the ADA fulfill its mission to prevent and cure diabetes.

About the American Diabetes Association

The American Diabetes Association is leading the fight to Stop Diabetes and its deadly consequences and fighting for those affected by diabetes. The association funds research to prevent, cure and manage diabetes; delivers services to hundreds of communities; provides objective and credible information; and gives voice to those denied their rights because of diabetes.
Founded in 1940, the association’s mission is to prevent and cure diabetes and to improve the lives of all people affected by diabetes. For more information call the American Diabetes Association at 1-800-DIABETES (1-800-342-2383) or visit www.diabetes.org.