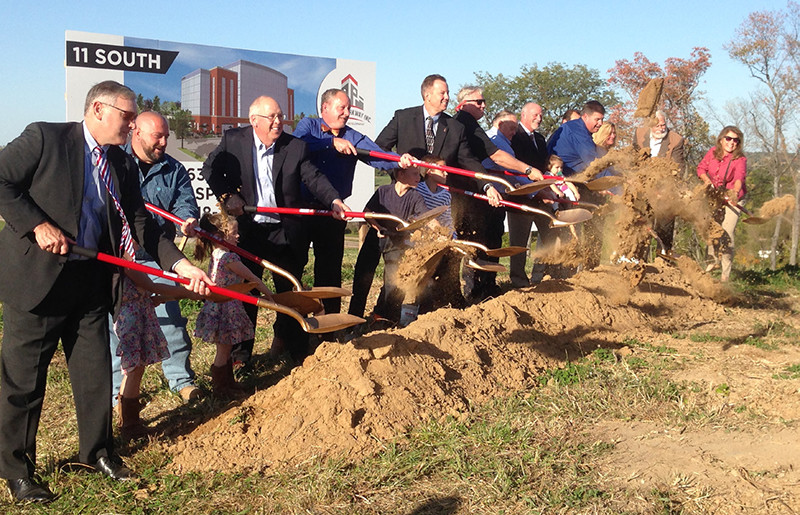 COLUMBIA — If constructing a $12 million building takes vision, then a local partnership has view to spare as work begins atop a bluff overlooking St. Louis.
Work is now underway on 11 South, a medical and office development that represents the first of potentially four buildings in a complex planned at 247 Sand Bank Road at the north end of Columbia.
Ground was broken last month by development partners and businessmen who will be the first tenants.
The group includes:
– Joe Koppeis, principal of Admiral Parkway, Inc., the developer.
– Dr. Michael Kirk, of Progressive Family Care
– Fred Shinn of ATI Physical Therapy and
– Dr. Donald Unwin, of Quantum Vision Centers.
Each of those operations will have space in the new building.
“We’re about 70 percent pre-leased, and that’s just the first building,” Koppeis said. “We’ve got three or four more depending on how big they end up being.”
Community Health Systems, which has a hospital in Red Bud, plans an Urgent Care facility in the new building, and negotiations are also underway with  an investment firm, some attorneys and other professionals.
Most of the committed tenants currently have operations in Columbia or Waterloo and are in need of expansion.
Paul Ellis, community and economic development director for Columbia, said the city annexed the 21-acre property about a year ago and took several subsequent actions that should cover any future phases of the project.
“The various segments, as long as they keep to the general plan, won’t have to go through another approval, except for building permits,” Ellis said.
Koppeis credited city and school officials with helping with pre-annexation agreements, tax abatements, utility taps and zoning.
The first, five-story, curtain-glass-wall and steel building will offer sweeping views of downtown St. Louis. The building name comes from the fact that the site is 11 miles south of the Gateway Arch, which, on a good day, is clearly in view. The fifth floor, what he called “an ego floor,” will have a patio facing the St. Louis skylight, a training room and meeting space and be available for rental.
“We’ve done some things that were a little foolish, cost wise, but because we sit up on this hill … we wanted it to be an entry to the county and the community that will last and look well,” Koppeis said. The top floor will be about 70 feet higher than the elevation, meaning it will be noticed from a great distance.
The building will be 63,200 square feet and is designed specifically for the sloped, hilltop location. The project is being constructed by Korte Luitjohan with financing provided by United Community Bank and Enterprise Bank.
Shinn said he has been part of the local scene since 1983. ATI was the former Monroe Physical Therapy. ATI is a nationwide concern and the number one employer of athletic trainers in the world. ATI will occupy 7,149 square feet on the first floor.
Kirk started Progressive Family care with partner Dr. Sean Lattimore in 2007 and enjoyed “tremendous growth.” Though they do have an office in Columbia, most of their operations are in Waterloo, where they’ve added imaging, a multiple specialty clinic, a surgery center and, most recently, dialysis operations.
“Our market growth was toward the Columbia market,” Kirk said. Realizing they were running out of space, he and other doctors began looking for options.
“We fell upon these 21 acres and we didn’t know what the heck to do with it; we’re not developers. That’s why we brought in the Donald Trump of Monroe County,” he jokingly told the crowd at the groundbreaking. The reference was to Koppeis, who is well known for commercial and business development in and around Columbia.
Progressive Family Care will occupy 4,834 square feet on the second floor.
Unwin said Quantum Vision Centers is the former Illinois Eye Surgeons and has been in practice for about 30 years. It now has 14 locations. Quantum Vision Center will occupy 4,379 square feet on the second floor, and there will also be a pharmacy and shared physician space.
Koppeis said the fourth floor, some 14,000 square feet, is available for lease.