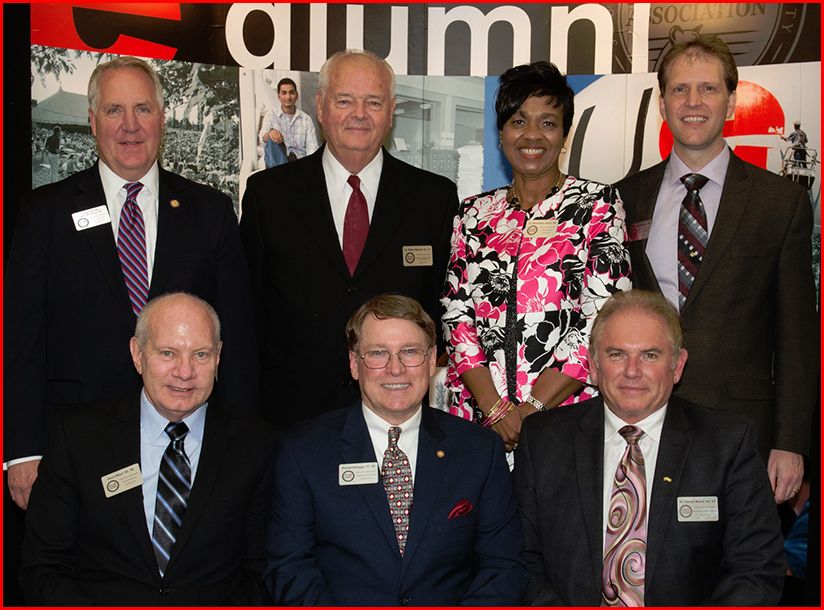 The alumni have achieved exploits in their respective fields, are role models and are testament to SIUE’s educational excellence.

“Those selected for the Alumni Hall of Fame represent the best of SIUE,” said Steve Jankowski, director of Alumni Affairs. “It is our honor to induct these outstanding individuals.”

The 2015 honorees listed by their college or school:

Dave Mayo started his career in information systems in 1981 at Worldwide Insurance after transitioning from a music career. In 1994, Mayo joined Edward Jones as director of finance/human resource systems. He was named a partner in 2001. In 2008, he took responsibility for information systems strategic delivery and joined the division’s executive team. Under Mayo’s leadership, Edward Jones’ industry technology ranking jumped from last place to first place within five years.

“This is a great honor,” Mayo said. “I remember praying to get through tests, and if I did, promising that I would give back to SIUE. So, now I’m trying to give back so that students learn the right way to do things.”

Mayo incorporates his passion for the arts by giving back to the community. He served as Edward Jones’ partner chair for the annual 2012 Arts and Education Council fundraiser. Mayo continues to pursue his love of music, performing as a percussionist and timpanist.

Rick Bragga is the president of Philanthropy 1, a philanthropic services and communications company. He is the only person to be awarded the Association for Healthcare Philanthropy’s (AHP) three top honors for leadership, writing and research. He has led and participated in charitable teams raising more than $350 million, authored numerous AHP journal articles, and presented more than 50 regional and national education sessions.

“I had an incredible experience at SIUE, and I followed a non-traditional path for a mass communications major,” Bragga said. “Communications gave me the base skills to do what I do.”

Bragga supports his community through the Boy Scouts, serving on the National Advisory Council, Southern Region Board and as chair of numerous other committees.

Terry Turchie graduated from California State University at Sacramento in June 1972 with a bachelor’s in criminal justice. He earned a master’s in government from SIUE in 1976. He joined the FBI in a clerical capacity in July 1972 and was appointed as an FBI special agent in February 1976. He spent 30 years in the FBI, working in the Portland, New York City, San Francisco, Sacramento, Charlotte and Atlanta field divisions. After retiring from the FBI in 2001, he worked as the senior counterintelligence officer at Lawrence Livermore National Laboratory. In 2008, Turchie co-founded TK Associates, a San Francisco risk management firm. He frequently serves as a consultant to corporate and law enforcement organizations.

Dr. Darryll Beard is presently serving as co-chair of the Illinois Mission of Mercy—an event that will provide an estimated $1 million in free dental care to patients who would not otherwise have access to necessary treatment. In July 2016, Beard will help bring the Illinois State Dental Society Foundation-sponsored event and approximately 1,000 volunteers together to serve patients in need at the Gateway Center in Collinsville.

“I owe everything I have individually and what I’ve done in my career to education,” Beard said. “I’ve been able to provide for my family, support my community and contribute to charities.”

He serves the American Dental Association (ADA) on the Council on Ethics, Bylaws and Judicial Affairs. Beard maintains a private dental practice in Waterloo.

Dr. Walter Warfield is currently a scholar in residence in the College of Education and Human Services at the University of Illinois-Springfield. At the age of 26, he assumed the position of principal of Mason City High School and eventually rose to serve as executive director of the Illinois Association of School Administrators (IASA). Among his numerous endeavors, Warfield served as state president of the IASA, national president of the Horace Mann League and Association of State Executives, and an affiliate of the American Association of School Administrators. Warfield is vocal in his support for the American public school system.

“Looking back at all the recognition I’ve received, this is a capstone to my career,” Warfield said. “Professors told me that once I had my degree, it was time to go help others. They said that if I helped teachers and students, my career would prosper, and it did.”

At SIUE, Dr. Daryl Beetner was a presidential scholar, a fellow of the Undergraduate Research Academy and a recipient of the SIUE Foundation Academic Excellence Award. He received a four-year graduate fellowship from Washington University in St. Louis, where he obtained a master’s and doctorate in electrical engineering in ‘94 and ‘97, respectively. He joined the faculty of electrical and computer engineering at the Missouri University of Science and Technology in 1998.

“It was critical for me to get a good education where I could afford to pay for it on my own,” Beetner said. “In four years, I graduated debt-free.

“I got more at SIUE than I would have at a bigger school. I had one-on-one experience with faculty, got to do undergraduate research, was an assistant in a teaching lab and got a job as junior in St. Louis where I was able to learn how to be an engineer while still taking classes.”

Dr. Wrenetha Julion is a professor in the Rush University College of Nursing. During the past 34 years, Julion’s clinical focus has been the care of women, children, families and critically ill neonates, before transitioning to research and academia. She is co-author of the Chicago Parent Program, a nationally recognized parent-training program for at-risk families living in low-income, ethnic minority communities.

“My preparation at SIUE positioned me to be what I always wanted to be, which is a nurse,” Julion said. “That experience provided the foundation for my career, and I got the education bug.”

Julion is a resolute activist for greater diversity and cultural competency among health care professionals. She is a dynamic advocate for meaningful societal change that challenges health disparities, health inequity and social injustice.

Congressman John Shimkus, R-Collinsville, represents parts of central and southern Illinois in the U.S. House of Representatives where he serves as a senior member and subcommittee chairman on the House Committee on Energy and Commerce. He has worked with his colleagues on both sides of the aisle to advance policies that enhance our nation’s energy security and public safety. He has also been a strong supporter of The NCERC at SIUE.

“I learned the language of business at SIUE,” Shimkus said. “After being elected county treasurer on the belief that I could lead, I needed accounting and finance background, so I could manage an office. It took a while, but it was worth it, and it has helped me as a member of Congress.”