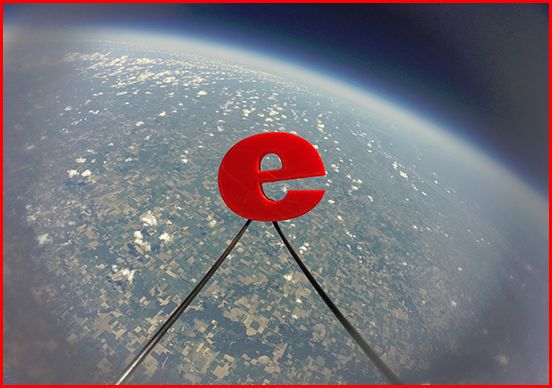 Three SIUE engineering students launched the balloon and assorted instrumentation from campus. The project was spearheaded by Alex Anderson, Jonah Gaffner and Amy Kurich, all juniors in the SIUE School of Engineering who were inspired by a similar venture demonstrated online.

“I thought it would be really cool to photograph the curvature of the Earth with our school’s logo just floating in near space,” said Anderson.

With the help of the School of Engineering, the SIUE Department of Chemistry and local companies, Enclave Student Housing and Sherrill Associates Inc., the team gathered the necessary tools for the launch.

The launch team’s instrumentation included two GoPro cameras, a GPS unit and an APRS tracker (radio). To keep the GPS unit correctly positioned at all times, the team used a 3D printer to design and fabricate a rotating support known as a gimbal. The students obtained clearance from the Federal Aviation Administration to launch, and used an online predictor to accurately track the path of the gear.

“The balloon expands as it rises until it reaches a diameter of around 32 feet,” Kurich explained. “When it cannot stretch any further, it pops and falls back to Earth, which takes about an hour. Ours landed near Nashville, Ill., about 45 miles away in a straight line.”

“Our predictor led us to within five miles of the landing place,” Anderson added. “We captured about 10,000 photos and seven hours of video.”

“The student team showed great dedication and determination by initiating and coordinating this project,” said Chris Gordon, associate dean in the SOE. “They overcame numerous constraints and obstacles as they refined their design. Their successful launch marks the opportunity to conduct many future multi-disciplinary tests and experiments using this platform.”

The students noted their project connected them with experienced members of the community who provided ample advice and support. Likewise, the team shared its project with participants during each session of this year’s SIUE Engineering Summer Camps.

“Their enthusiasm for this project is contagious,” Gordon said. “This team shared the dedication and perseverance needed in engineering problem solving, motivating future engineers to pursue their own passions within the field.”

1 million EVs: Inside the state’s plan for electrifying the transportation sector