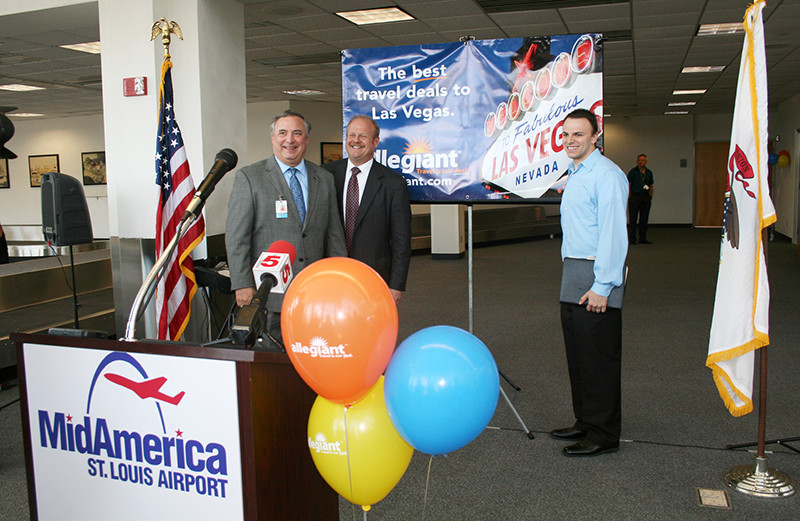 MASCOUTAH — Allegiant air service is again offering non-stop, one way flights to Las Vegas, and almost from the day they were announced, they’ve been one of the hottest tickets in town.
The flights from MidAmerica St. Louis Airport resume on Nov. 5, after a six-year absence.
Allegiant offered flights from MidAmerica to Las Vegas from 2006 to 2009, but suspended them because of market conditions. Since that time, St. Clair County Board Chairman Mark Kern said, one of the questions he’s fielded most is when the Vegas destination would be restored.
The resumption of flights was announced during a gala celebration at the airport on Aug. 11. The now-ended, introductory fares for as low as $49 were quickly snatched up.
But even with the resumption of higher fares — and two months before the first jet takes off to Sin City — the destination is proving popular. If you’re planning a trip from MidAmerica during the end-of-year holidays, you better hurry.
Normal fare prices fluctuate greatly depending on the date. For instance, at press time, a departure on Sunday, Nov. 15, was costing $89.50 a ticket and the return flight for Nov. 20 was $124 a ticket. But, there were only three seats remaining on each of those flights.
The flights will operate twice weekly and will fly nonstop between MidAmerica St. Louis Airport and McCarran International Airport. Las Vegas will be MidAmerica’s third Allegiant destination, adding to existing service to Orlando and Tampa.
Kern said the county is not willing to stop with the latest good news. MidAmerica Airport still doesn’t turn a profit, he said. The county continues to explore other air options, including more flights through Allegiant, in hopes of someday getting the airport to break even.
“Every flight we have helps that much more with the bottom line,” Kern said. “We’re always searching for new business at MidAmerica.”
Kern said convenience is part of the value of the Allegiant service, noting that passengers enjoy “no lines and free parking as part of their hassle-free experience of flying directly from MidAmerica.”
Allegiant’s manager of airports Eric Fletcher said flights were already being booked even before the official announcement, as word filtered out. Each flight of the MD-80 jets will hold up to 166 passengers.
“If early ticket sales are any indication, people here are stoked to go to Vegas,” he told the Illinois Business Journal.
The community has “embraced” Allegiant in such a way that made the Las Vegas alternative attractive again, Fletcher said.
“The community and local leaders had pitched us endlessly and we just had to find the right time,” he said. “I made a promise here in 2012, saying we weren’t done yet, and I can still say the same thing. I’m hoping to come back for another announcement (some day).” He declined to discuss other possibilities.
The Las Vegas flights will be year-round and generally on Fridays and Mondays, Fletcher said. The flights to Florida are generally Thursday-Friday and Sunday-Monday, he said.
Travelers can book their Las Vegas vacation by visiting Allegiant.com.
The company said it provides customers with low base fares averaging nearly half of the cost of the average domestic round-trip fare. The innovative business model has allowed the company to grow from one aircraft and one route just over a decade ago, to providing convenient, affordable service in more than 100 communities nationwide.
“Allegiant fares offer incredible value — shockingly low,” Fletcher said.