BELLEVILLE — St. Clair, Monroe and Randolph counties all saw an increase in year-to-date home sales in July 2015 compared to July 2014, according to newly released numbers from the Realtor Association of Southwestern Illinois.

“As we gear up for the fall season, we are excited to continue the positive trend in the Metro-East Housing market,” states Doug Payne, president of the Realtor Association of Southwestern Illinois. “There are quite a few unique and helpful mortgage products that can help a buyer in today’s market.”

Payne said a new program from the Illinois Housing Development Authority called New 1stHomeIllinois is available in 10 Illinois counties, including St. Clair County. 1stHomeIllinois includes $7,500 in down payment and closing cost assistance and is available to first-time buyers, veterans, and those who haven’t owned a home in three years.

The housing statistics are as follows (statistics provided by the SIR/MLS, Inc. and the Illinois Association of Realtors): 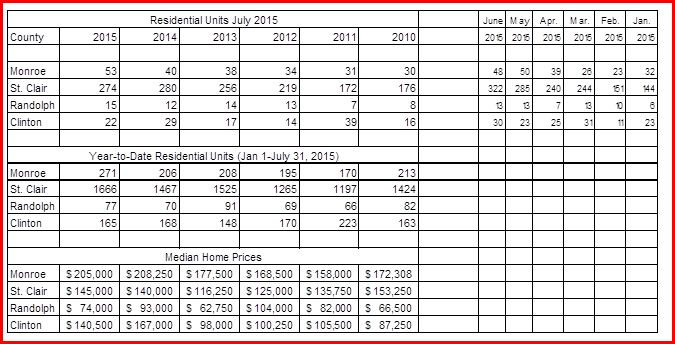