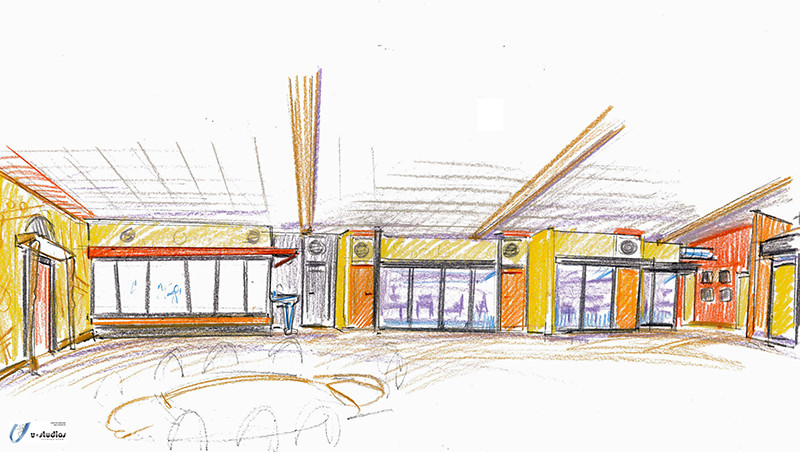 BELLEVILLE — The buzz of saws and crash of hammers are thick in the air these days as a city landmark slowly evolves into one of the first serious efforts to ignite the co-working industry in southwestern Illinois.
The second floor of the historic Turner Hall is being transformed into a co-working space and training area that will be used by entrepreneurs and others who want to make use of the facilities as an alternative to a home office or traditional work setting.
The project is called Peer 151, which is a play on the street address, 15 N. First St.
Significant to the project is the idea of revitalizing a 90-year-old building and turning it again into a gathering point. Owner Kurt Artinger acquired the property from the city two years ago, primarily to locate his own business, Replacement Services LLC, which already takes up most of the first floor.
Utilizing some of the 48,000-square-foot building as a co-working space has always been on the radar. In the purchase agreement with the city, some 3,000 square feet would be targeted for an incubator/co-working space for entrepreneurs.
Artinger said he made the rounds in the “St. Louis entrepreneurial ecosystem” to get input from successful operations like T-Rex and CIC.
Artinger recently hired Executive Director Chris Oswald, to oversee the co-working project. Renovation is now proceeding rapidly and should be done by October.
“There are so many people who can’t wait for this to happen,” Artinger said. “I had a programmer called me and said, ‘Count me in.’ These people have to work from home. They’ve got kids running around, they’ve got the dog barking. It’s hard to work from home and at 5:30 set your pen down.”
With the second-floor restoration, community meetings and receptions will also be possible — a throwback to the building’s days as the local YMCA. Artinger, a Belleville native, remembers that time from his boyhood.
Oswald’s mission is to tap into efforts that are well-established in St. Louis and get them to spread to the Metro East.
Some 6,000 square feet of the second floor will be devoted to co-working space, which will be membership based. For $125 a month, members will get access to space during business hours, as well as access to utilities, wi-fi, coffee bar, a break room with a beer bar, conference room and CEO guest speakers, among other things.

“We think we’ll have 30 memberships — and that’s based on exploring the co-working spaces that exist in downtown St. Louis,” Oswald said.
Peer 151 will serve as a common space in which like-minded businessmen can link up to learn how to improve their individual businesses.
Artinger calls it a millennial trend, a “water-cooler collaboration that didn’t exist 30 years ago.”
Oswald said some members of today’s workforce simply want to be among peers they can lean on.
“There’s always a community of people for whom the next step is just getting around the right people,” he said. “We want to be that kind of place, where people take their B work and turn it into A work. And if you help 30 people do that you’ve really helped their business and the community. That’s what I’m all about.”
Oswald’s background would not suggest expertise on co-working. It’s in theology. The 40-year-old has been doing ministry-related work since he was 20.
“I was a serial nonprofit guy. I’ve done work in Africa working for AIDS orphanages; I’ve started various ministries,” he said.
For him, it’s not a stretch to go from helping people in general to helping them specifically in their work life, he said.
“You help a person at work you’ve helped their quality of life,” he said.
Artinger said he’s been impressed with Oswald’s vision almost from the day that Oswald called him out of thin air to discuss the project and see how he could become involved.
Artinger said: “We’re definitely aligned. When I first sat and heard his story about what he’s done — it was more about his passion.”
Oswald learned of Artinger’s project while investigating the possibility of getting involved in coworking space in St. Louis. Now, he’s inviting many of those contacts to Belleville to show them what’s available. Important to the idea is that Belleville is closer to St. Louis than many of that city’s own suburbs.
Downtown Belleville, where several buildings have been renovated and new businesses established, has the right kind of “vibe” to draw such entrepreneurs, Oswald said.
“We think there’s already a pretty vibrant community of innovators here, but a lot of them are just working from home. That’s what I’ve done — that, and Starbucks and Panera’s,” he said, referring to his wi-fi habits.
A year from now, Artinger says he hopes to see a perception change about Belleville as an urban center. He would like to see talent from all over the world eventually come through Turner Hall.
“This is a cool downtown. It’s just like Washington (Avenue); the coolest parts of St. Louis look just like this,” he said. “We’ve got this foundation we can grow from. The only way we’re going to change this downtown is by bringing more employers down here. If you’ve got 10,000 people working within a seven-block radius of downtown, these shops will grow to support them.”
The millennial workforce is all about adding to community value, Artinger said, explaining some of the interest in the Peer 151 project.
Oswald sees the space being taken by engineers, writers, programmers — younger people who aren’t afraid to try things differently.
“Kurt’s daughter Haylee is the marketing director at Replacement Services and came up with the phrase, ‘Work independently, not alone.’ That’s kind of the idea, being in an environment with your peers, doing your work but falling back on collaboration when you need it,” Oswald said.
“There are innovators in this community who need a rallying point,” Oswald added.
Artinger added: “We hope to be successful with changing the way things are done on this side of the river.”
Oswald welcomes questions about Peer 151. He can be reached at csoaco@gmail.com or through the website peer151.com. There is also a Facebook page.
Artinger can be reached at kartinger@replacementservices.com.

Beiser reappointed to board to protect military bases

ALTON – State Rep. Dan Beiser, D-Alton, was recently re-appointed by the leadership in the House of Representatives to serve on the Interagency Military Base Support and Economic Development Committee.
The committee was created in 2005, in response to national efforts to close military bases. The committee serves as a liaison between military branches, base leadership, and state agencies. Additionally, members make recommendations about how Illinois’ bases can be reutilized, improved and remain open.
Illinois has three military bases, including Scott Air Force Base in St. Clair County.