State Rep. Jay Hoffman, D-Swansea, was honored as a champion for middle-class and working families in Illinois by the Steelworkers Organization of Active Retirees during the sixth annual S.O.A.R. Awards at the Neighborhood Social Club in Pontoon Beach. 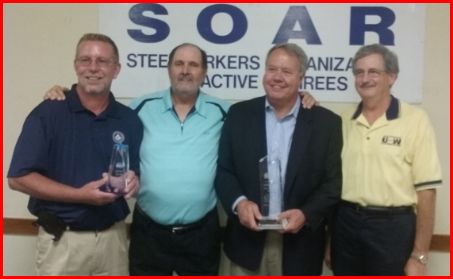 Throughout his time in the House of Representatives, Hoffman has been a leading voice for workers’ rights, the chapter said, in making the award. This year he passed into law House Bill 4006, which establishes the George Bailey Memorial Program to provide immediate financial assistance for medical costs to critically wounded burn victims. Additionally, in 2013 Hoffman worked to crack down on dishonest business practices and tax evasion by disreputable contractors by passing House Bill 923 into law.

Earlier this year, Hoffman, who is also chairman of the Labor and Commerce committee, led the public debate as the House of Representatives defeated two anti-worker proposals put forward by Gov. Bruce Rauner. The first, House Bill 1286, would have dramatically hurt middle-class families by making it harder for them to keep their jobs and pay their bills. The second, House Bill 1287, would have cut wages and made it harder for injured workers to provide for their families, the chapter said.

The Granite City chapter of S.O.A.R. met this month to recognize individuals within the organized labor community for their work on behalf of active and retired members.

“Both active and retired union members need a strong voice in Springfield, and for many years Rep. Hoffman has been a trustworthy advocate for organized labor,” said Jeff Rains, president of Granite City S.O.A.R.

Hoffman said: “In order to plan for a comfortable retirement, Illinois workers need safe work environments, fair wages and protections in the case of on-the-job injuries, and the best way to ensure these conditions is to guarantee workers are heard, both in the workplace and in Springfield,” Hoffman said. “I want to thank the retired steelworkers for their years of hard work, and reaffirm my commitment to defending the rights of workers in the Metro East and across the state.”