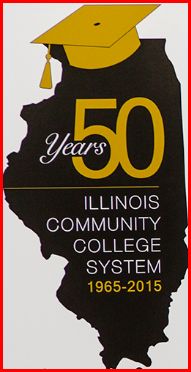 “We don’t offer shop classes or teach key punch anymore. We teach nanotechnology and photon therapy,” she said. “We partner with local business and industry to develop skills that will be necessary for jobs of the future.”

Anderson also presented a proclamation from Gov. Bruce Rauner declaring July 15, 2015, through July 15, 2016, as “The Year of the Community College” in honor of the Illinois system’s 50 years of student success.

Since July 15, 1965, when the Illinois Public Community College Act was signed into law, the system has expanded across the state into 39 community college districts and 48 campuses. Illinois community colleges now serve approximately one million people each year.

State Sen. Pat McGuire, chair of the Illinois Senate Higher Education Committee, also congratulated the Illinois community college system on its 50th anniversary. He encouraged parents and students to “take our focus off selectiveness and focus on effectiveness” in education.

“So you know what? For my money, those exclusive joints on the East and West coast that send their graduates to Wall Street, let them be as smug and as self-satisfied as they want,” said McGuire. “I’m sticking with Joliet Junior College and Illinois’s other community colleges.”

Illinois Community College Trustees Association President Andrew Bollman commented that “Over the past 50 years, community colleges have strengthened this state and nation by providing workers in all fields of study, from healthcare and law enforcement to alternative forms of energy.