BELLEVILLE – The Realtors Association of Southwestern Illinois says home sales climbed in three of its four reporting counties during the month of May 2015, compared to the same time frame one year ago.

Realtors in St. Clair County sold 7.6 percent more homes in May 2015 compared to May of last year. In that same comparison, Monroe County recorded a 25 percent increase in home sales, while Randolph County saw a 44.4 percent increase.

“As you can see in the May home sales report, the Metro-East housing market is strong,” states Christopher Mitchell, president of the Realtor Association of Southwestern Illinois. “Where the market has most recently been geared in favor of buyers for the last few years, we are starting to see it turn towards sellers as the number of days on market is decreasing and the median home prices rising.: This news is not bad news for buyers though, he said. According to CoreLogic, 90 percent of U.S. homeowners now have positive home equity, meaning that rising home prices equal a return to home equity for more homeowners. 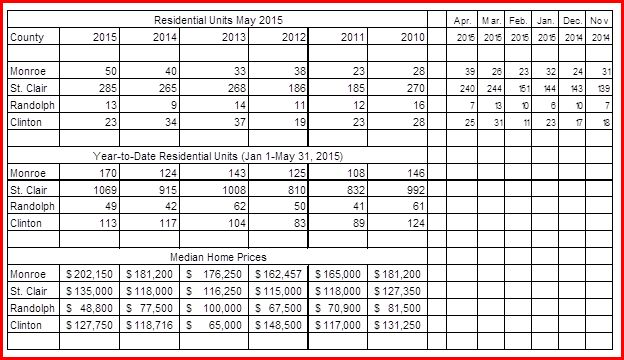 Statistics are provided by the SIR/MLS, Inc. and the Illinois Association of Realtors.

The Realtor Association of Southwestern Illinois is a voluntary trade association located in Belleville whose nearly 900 members are engaged in all facets of the real estate industry.