EDITOR’S NOTE: U.S. Rep. Mike Bost, R-Murphysboro, served 20 years as a state representative in Illinois before being elected in November to serve the 12th Congressional District. He took office in January.

IBJ: You are like a little fish in a big pond now, aren’t you, as opposed to what you were in the Statehouse? 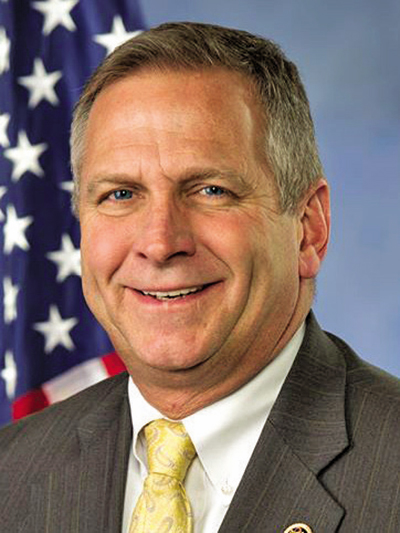 Bost: Yeah, after 20 years, back to being a freshman is (a challenge). One thing that’s amazing, when I see the guys and gals who are there who have no government experience whatsoever, I think, “Oh my gosh, you’ve got to be so lost.” I mean, I’m trying to play catch-up, with the diversity of issues that are coming at you. In the statehouse there’s yourself and your legislative assistant and your secretary in Springfield. Now, I’ve got nine in the D.C. office; four here (in Belleville); and two down in the Carbondale office. And we’re shorter-staffed than most Congressional offices. You can have a max of 18.

IBJ: Does the bureaucracy of it all kind of surprise you?

Bost: Not the bureaucracy per se, but the bureaucrats in Washington and their lack of response  to you as the elected official and representative of the district. I’ve run into it, whether it’s the Army Corps of Engineers, the EPA, the VA. Their basic unwillingness to get them — without really fighting them — to respond to inquiries and things we’re working on in the legislature.

IBJ: Some of that is just a matter of learning the ropes and knowing who to talk to, isn’t it?

Bost: That, and it’s their arrogance, it really is. You know, in the state of Illinois — and it’s hard to believe that Illinois has something they do better — when we draft a piece of legislation and it’s sent to an agency, the agency must come back when  implementing the rules and go through JCAR (The Joint Committee on Administrative Rules). There is still oversight on them, every time they change the rules. (At the federal level), we create all these agencies and we just say, “go.” The only time they come back is when there’s a real problem … or when they need more money.

IBJ: Let’s talk about some local issues. Granite City (U.S. Steel) has been a big topic, but there’s a bigger issue with the steel industry in general. What are your thoughts?

Bost: It drives a nail through your heart seeing (80) guys laid off. (The problem) is threefold. One is the dumping (of cheaper foreign steel in the U.S.) that started occurring three and a half years ago. By the time they file a complaint through the WTO on the fact that they are illegally dumping — Korea, China — then you get that response from our agency, the Department of Labor, then you go to court, it’s three years by the time you get them to stop. By that time, you’ve already punched that much low-price steel into the market. We’ve got to speed that (complaint process) up. That’s one issue.
The (second) one, and this is harder to deal with, a lot of that also occurred because of currency manipulation in those nations, which is difficult to prove, but we’re looking at it to see how we can handle that. The third problem is this particular plant supplied steel for research and drilling for the oil industry (and now there is less demand). You put all three of those together and it’s a perfect storm of what we’re facing.
Now, add that to the fact that we’re now negotiating the TPA (Trade Promotion Authority, a trade agreement that will require an up and down vote of Congress.) Steelworkers are in absolute opposition to it.
Basically what (Congress) is trying to do is give authority to the administration to negotiate on our behalf trade agreements that are already occurring with the Asian and European markets. The Asian market right now, without or without us, they are going to do it. They are either going to cut us in or cut us out. This allows them to go forward. What the TPA does is allow them to go into those agreements, and those agreements must come back to the Congress.

IBJ: Let’s talk about something I think you’ll enjoy talking about. Tell us about your  “Take a Congressman to Work” program.

Bost: I’m on the Small Business Committee. I’ve promised that I want to keep in touch with our small businesses. How better to do that unless I go right into them? And I enjoy doing it. I was really glad when I went to (Duke Bakery in Alton) and I was there for the bread and not the donuts. The donuts would have meant I had to be there at 1 o’clock in the morning. The bread, I could get there at 6:30 or 7, and I was OK (laughs).
It doesn’t matter if it’s a bakery, a coffee shop, a factory or an insurance agency, by going to work in those places … you can really get the finger on the pulse.

IBJ : When you first ran for Congress, there were two things you really stressed. One was putting people to work, the other was immigration reform. Where are we going immigration-wise?

Bost: Right now, unless we get the borders secure it is very difficult to deal with the other side of that. We also want to make sure the courts are going to stop the president from taking his own path (granting mass amnesty for illegals). We would have loved to use the power of the purse to do that. The Senate could not move the bill that we moved over to them. Thank goodness, the courts are stopping him right now. But before we start in on the level of immigration reform that must occur, we must secure the borders. I’m not on the committee … but I trust the people who are looking at it now to come up with the idea that is sensible, cost effective and secure. After that we must provide a way for immigration to sensibly occur. They must go through a procedure, not amnesty.

IBJ: What about national defense? As a veteran Marine, you’ve got particular thoughts.

Bost: I’m doing everything I can to make sure TRANSCOM (the command that oversees Scott Air Force Base) keeps operating. We do have an extreme foot up as of last Friday. Our general who was head of TRANSCOM just got promoted (Paul Selva, nominated by Obama and awaiting confirmation) to be deputy of the Joint Chiefs of Staff.
But let’s talk about defense: We in the United States have a Constitution that says there are certain things we must do. Secure our borders, deal with foreign trade, interstate commerce and national defense. We must be wise in our investments, regardless of how we feel. We’ve got to have a strong national defense and I think we’ve weakened ourselves right now. We’re down right now on our F/A-18s (which are being pushed further into service because a successor plane, the Joint Strike Fighter is not yet ready). I made a call in this budget for 12 more. It’s in St. Louis where they are produced.

IBJ: How does terrorism factor in to all this?

Bost: It’s got to be part of (defense) and I’ll give you an example. When we were pushing for taking the power of the purse away from the president over the immigration stuff, that (issue) was tied with funding for Homeland Security. We can’t back off on fighting terrorism on the home front or overseas yet. And I don’t know when we do. We can’t let our guard down. Politically, I had a whole group of conservatives say, “Just shut it down.” Eighty percent of Homeland Security would have kept working, like when government was shutdown before. But can you imagine if a threat of any type would have occurred and we would have let the funding for Homeland Security go away?

IBJ: In as much as your reputation was built on your (famous May 2012) Statehouse rant, I’m thinking that people want to pick arguments with you all the time. Am I right about that?

Bost: A little bit. I had a guy last night (at a listening session), who said, “When are you going to yell about my issue?” (Laughs). When I did that I had been in the Illinois General Assembly 17 years. I knew what I was yelling about; I wasn’t yelling just to be yelling. And if you listen to it and break down what I said, each of those was clear facts that were occurring with the bill (involving the House Speaker’s last-minute attempt at pension reform).

IBJ: Any other huge issues you want to deal with?

Bost: I’ve got assigned to a committee to research and find out where agencies have duplicate or burdensome oversight, to see about what we can remove — oversight and/or regulations that cause small business to be stifled, either in interstate commerce or just natural growth or on the world wide scene. It’s Small Business and four or five other committees that have members on this committee.

(After our interview, Rep. Bost and Rep. Rodney Davis, R-Taylorville, introduced the bipartisan American Trade Enforcement Effectiveness Act, which aims to streamline the process for addressing unfair dumping of foreign products into U.S. markets. At deadline, no action has been taken on it. The TPA issue cited in this article was also pending.)