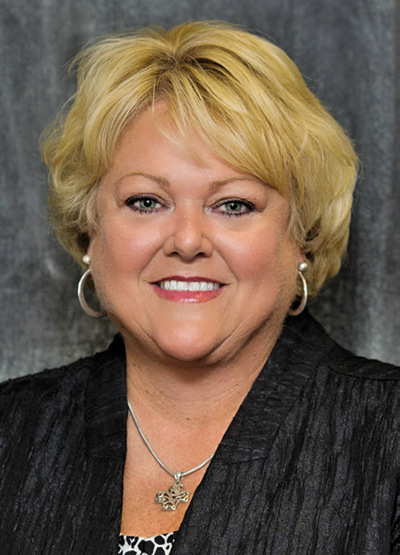 During her 10 years with TheBANK of Edwardsville, Peggy Vallandingham has helped the financial institution expand its presence in
the Metro region, specifically in St. Clair County.
When Vallandingham started with the bank in 2005, she worked out of a small office in Swansea. Since that time, she and her co-workers have contributed to the addition of four banking centers in Belleville, O’Fallon and Swansea. Vallandingham has also expanded her skillset, moving from the retail lending division to her current position in commercial lending.
“The highlights of working for TheBANK of Edwardsville as a commercial lender are meeting new people and learning about their businesses — what they do and what they need from our bank to be successful,” says Vallandingham. “My goal is to be an example to other employees by taking care of people. When people look to us for help, they want a live representative to pick up the phone and give them personal service. Fortunately, this is TheBANK of Edwardsville’s philosophy.”
Vallandingham prides herself on getting to know her customers. TheBANK of Edwardsville helps her to develop those relationships through its community service initiatives involving charitable, civic and educational organizations. She believes the bank’s extensive activity and participation in the community makes banking more personal.
Thirty-six years ago, Vallandingham took a summer job as a bank teller at the former Magna Bank in Belleville. She went on to take courses at the American Institute of Banking and decided to pursue more responsibility at the bank. She became a loan operations officer, liaison between bank data services and the branches, then moved to the bank’s processing center as a regional vice president /manager of loan operations. Vallandingham then worked as a retail loan underwriter before becoming a retail lender.
“During my early years in banking, I remember calculating interest on loan payments by hand. I hand-calculated transactions and hand-wrote information on ledger cards. Technology and automation have made it a different world,” she said.
Vallandingham was born and raised in Belleville. She resides in Millstadt and serves on the board of the Millstadt chapter of Optimist International and the Belleville West High School boosters and volunteers for various organizations.