By DENNIS GRUBAUGH
COLLINSVILLE — The city is nearing the end of the road on two projects that at times have seemed more like obstacle courses.
In coming months, work will be done on both the Summit Avenue Bridge project and the Illinois Route 159 reconstruction, and that will be cause for celebration, city officials say.
“If you show me a community that isn’t under construction, I’ll show you a community that isn’t achieving,” said Erika Kennett, director of economic development for the city. “Part of being under construction is a promise for the future of an area. When 159 is complete, the businesses along that corridor will have better access, and citizens will have better mobility to get through the community.” 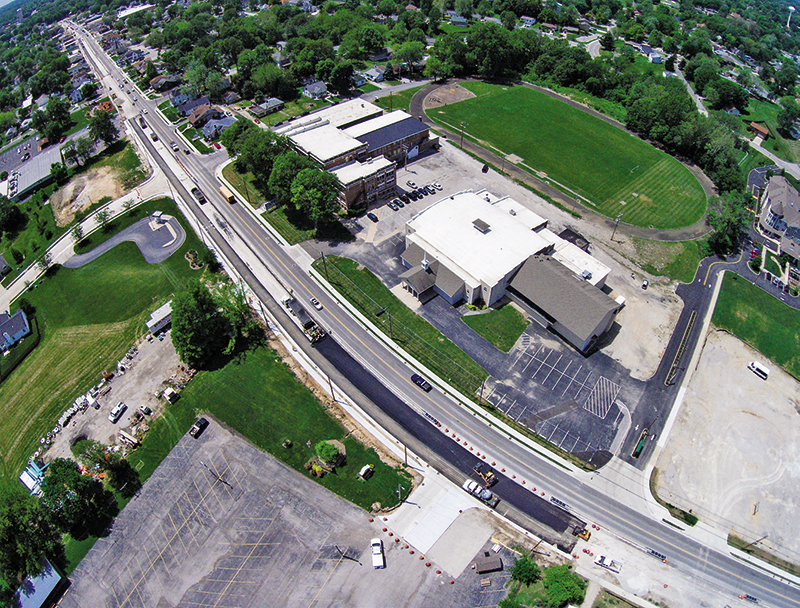 The rebuilding of 159 began with a feasibility study initiated by the city and completed in July 2004, the Illinois Department of Transportation, which oversaw the work, said. The work was badly needed. Traffic had long bottlenecked on that corridor.
The groundbreaking ceremony for an overall, three-phase project took place Aug. 26, 2010, and was culmination of years of effort to line up funding.
The highway has generally been widened and realigned, including through downtown Collinsville. In all, at least 22 properties had to be demolished — nine of those in the latest stretch, IDOT said.
The construction was divided into three sections — South, Central and North.
– Construction on the Central Section (through downtown, north of Church Street to north of East Johnson Street) was completed in the fall of 2011.
– Building on the South Section (South Morrison to north of Church Street) was completed in summer of 2013.
– The North Section (from north of East Johnson to Kinloch Avenue) is under way now and could be done as early as this fall.
The last construction leg, which goes from near downtown to near the Beltline, has been an exercise in patience both for drivers and for businesses who lost some of their customer access.
City Manager Scott Williams acknowledges the frustrations.
“There was a lot of property acquisition in there. There were so many individual pieces of property, and it took forever to get them all ironed out,” he said.
On the other hand the progress is notable.
“It’s looking wonderful already. Traffic is going to move through there so much more efficiently,” said Williams, the former police chief of the community. The current leg was originally predicted to take 2.5 years but should be done in only two, he said.

Contractors broke ground on the $13 million last segment in late October 2013. The work is being done by Baxmeyer Construction Co. of Waterloo.
“It’s a total reconstruction. They’ve added a turn lane there, but at the same time they’ve installed the water drainage, the sewer lines, the curbs and the gutters.  I will say this, it has been a challenge to the businesses who have had a struggle with getting customers to their businesses. But once it’s complete it’s going to be a godsend,” Williams said.
He added: “There were a couple of businesses that shut down (during the course of the work), but I can’t say for sure if it was a direct result of this.” One that came immediately to his mind was a former milk store next to the Shop ‘n Save.

The Summit Avenue Bridge has also been a headache, but on a more limited scale.
“We were originally promised it would be a three-month job, and it’s already been six,” Williams said. “I know the folks living around that bridge are really frustrated, and we’re working with the contractor to try to speed things up.”
A combination of issues slowed things down, including weather and an unanticipated broken water line.
“The good news is, we expect this to wrap up in the next 30 to 45 days,” he said.
The work is to replace a  bridge that was deteriorating, as well as the stormwater system and water and sewer lines.
The bridge is at the intersection of Summit Avenue and Johnson Hill Road.
RCS of  Wood River is performing the $1.3 million project, which is being paid for by federal funds through the Surface Transportation Program and some tax increment financing money from the city.
The city will attempt to recover any costs of fixing the damaged water line if it is eventually deemed that the bridge contractor was responsible, Williams said.