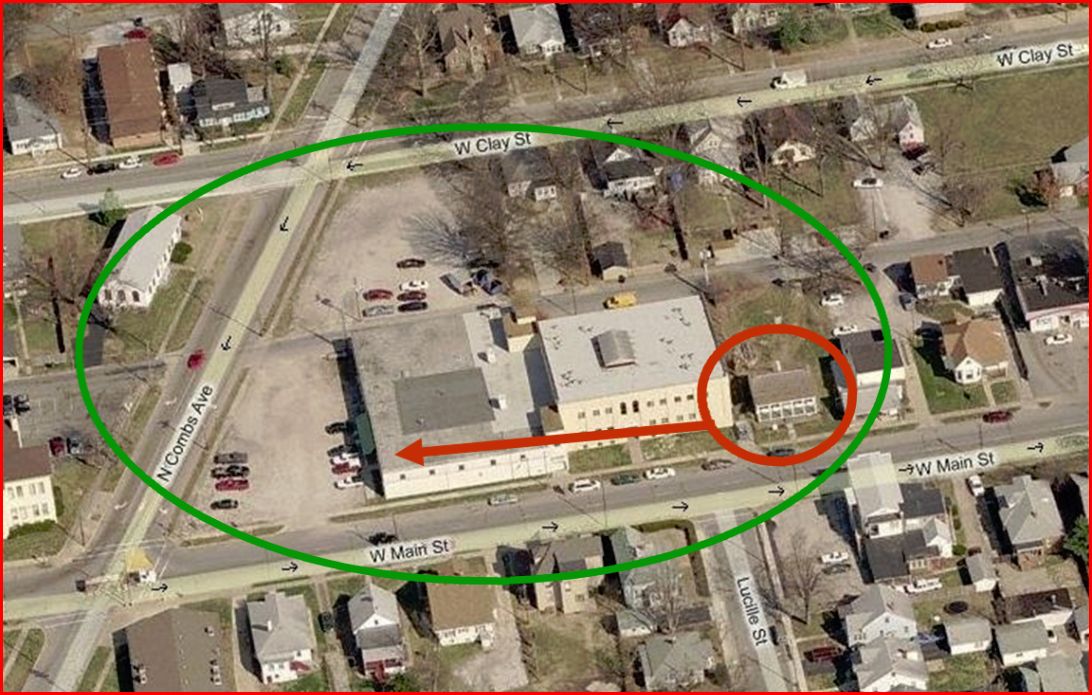 The arrow in this photo indicates the planned movement of the historic D.D. Collins House (circled). The buildings to its left are being demolished to make way for a community park at West Main Street and North Combs Avenue.

COLLINSVILLE – Demolition is set to begin today on the Martha Manning Warehouse and Main Square Apartments to clear way for a history-based park project along West Main Street.

Demolition is expected to take four to five weeks.

The city intends to create Collins Park, a new community gathering place that will also serve as an attractive entryway to the Uptown area. The focal point of the park will be the city-owned D.D. Collins House, a Greek revival home built in 1845.

The home, which features rare, pre-Victorian-style architecture, was built by Judge Daniel Dove Collins, the first president of the Collinsville Village Board. The historic home is undergoing complete restoration to return it to its original state. Uptown Coordinator Leah Joyce said this will be the first historic home attraction for the city, and plans are to furnish it to the period of 1840-1860.

The home will be relocated approximately 200 feet toward the corner of West Main Street and North Combs Avenue. The site will be returned to green space, and a community park will be created. The project will utilize native plantings and sustainable attributes. When the Collins Park is complete, the home will serve Collinsville residents and youth, as well as regional tourists with informational displays, educational programs, and interpretive gardens.

Though ownership of the home and park will remain with the City of Collinsville, a 501(c) Friends group has recently been formed. The Friends of the D.D. Collins House will act as a support group for the site. The group will maintain the educational garden, select and acquire interior décor, conduct tours, fundraise and develop educational materials and programs. Those interested in joining the Friends group may contact President Lavadna Hines at (618) 420-0288.

The land remaining after the creation of the park will be marketed to developers for new residential or mixed-use development, Joyce said.

The creation of Collins Park is yet another key element in the city’s effort to revitalize the Uptown area which has seen significant public and private investment in recent years, she said.