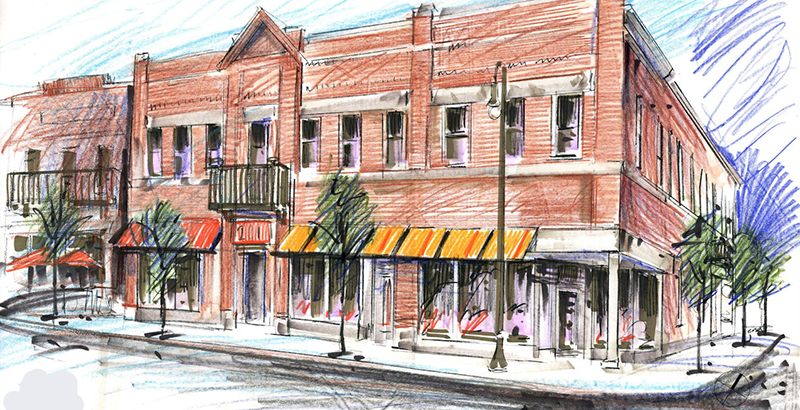 Scott and Bud Jacob are brothers, and Gregg Crawford grew up alongside them in Fairview Heights. They’ve stayed pals for decades.
But it’s more than a lifelong friendship. Theirs is also a business relationship, and today it’s playing out to the betterment of downtowns across Metro East.
The trio is putting the wraps on a stylish restaurant and loft complex in the former Apex Building on East Main Street in Collinsville, where the city recently recognized them as Development of the Year. It’s the latest in a long string of recognitions for the builders who have constructed hundreds of projects in Southwestern Illinois, both commercial and residential.
The Collinsville project is the Reifschneider’s Grill and Grape, a sports bar and restaurant on the corner of East Main and South Center streets, scheduled to open June 1. The restaurant is being constructed with an all-glass garage door in the front that will swing open for an inviting appearance. Patio seating around the building will be a plus, Crawford said. There will be room for 200 diners, not counting the banquet room, which will be available for private parties.
Upstairs will be five luxury lofts, which will have a private entrance of their own. The construction will include a sound barrier between floors. The loft units will range from 850 square feet to 1,100 square feet.
The building and its setting are emblematic of the approach the group takes in rehabbing downtown cores.
“That’s really what we do; that’s our passion,” Crawford said. “We look for walkable Main Streets.”
Hence the name of the partnership, Main Street Developers, LLC.
Each of the partners brings something different to the table. Crawford is the hands-on guy, overseeing much of the construction, which is handled through another company they own, MidAmerica Contracting, a general contractor formed in 1986.
Meanwhile, Bud Jacob is the sales and marketing man, keeping his eye out for future projects, and younger brother Scott is “the operations and numbers guy,” who figures out if buildings are worth the investment.
“We look for cities that like to work with us. They might have some TIF dollars, they might have a building that’s just sitting there, and nobody’s coming in,” Scott Jacob said.
“Cities that are aggressive, that want to redevelop their Main Streets back to where they were 100 years ago, have to be willing to do those kinds of things (to lure developers),” Bud Jacob said. “The cities that say, ‘Come in and do it and pay for it yourself,’ their cities are just going to continue to wilt.”
Collinsville worked with the trio. In 2010, the city received donation of the Apex Building, which had fallen into complete disrepair after years of inactivity. The city had used $468,000 of its own funds to gut the interior, fix the roof and secure the property until it could find the right developer.
“That’s why we were so attracted to Main Street Developers, LLC,” said Leah Joyce, the coordinator of Uptown Collinsville. “That’s what they specialize in, rehabbing historic buildings on Main Street and bringing creative and unique uses to Main Street.”
The terms of the redevelopment agreement called for Main Street Development to purchase the building from the city (for $468,000) and for the city to reimburse the developer the same amount toward construction costs, out of its TIF funds.
By the time the builders are done, some $1.2 million will have been spent on a property that will eventually be assessed at closer to $1.6 million, Crawford said.
The Reifschneider’s location is the third in the area, the others being in Freeburg and Columbia. Main Street Developers built all three.
“The one in Freeburg was a bowling alley, but you’d never know that today. And the one in Columbia was an old biker bar that we all got a hold of and redeveloped,” Crawford said.
The Apex Building had the kind of allure that normally draws the trio. Crawford ticked off the attractions.
“The character of it, the big windows boarded up across the front, the big store front,” he said. “I love those old store fronts, I know we always look for that. We’re into that industrial look, the exposed brick and the hard surfaces. And then we have to figure out what kind of businesses can we put in there? Can we make the cash flow?”

The group also owns and has remodeled a neighboring building, the Fifth Quarter at 118 E. Main St., and it’s considering purchase of yet another one nearby, although the men aren’t ready to talk about it just yet.
“What happens is when we come into a town like Collinsville, we start looking at other buildings. If you have one investment up here that you have to manage you might as well have multiple,” Crawford said of the strategy. “Plus, we can kind of control the rental market. These will be high-end expense. What will happen is we’ll have the only game in town. We’ll just move along to the next building and start doing more.”
Scott Jacob still lives in Fairview Heights, Bud lives in Belleville, and Crawford lives in Columbia, so the three are actually investing in their own communities.
“Greg has done a great job, coming into Main Street and dressing it up and making it better,” Columbia Mayor Kevin Hutchinson said in a video released in connection with the Development of the Year Award.
All three men started in residential construction and branched into commercial, first in Belleville. Among other projects they tackled were the Tavern on Main as well as a loft project in the former Amens feed mill building on Second and West A streets. Today, it’s called the Feed Mill Lofts.
From Belleville, they started working smaller towns, ramping up their Main Street approach. Several more notable projects were done in Columbia, Waterloo and Freeburg.
The challenges are many. Buildings that were constructed way back in the 1800s have stood the test of time, but often the second floor must be shorn up to hold any kind of weight. And electrical and plumbing concerns are substantial.
“Those are the things in rehab that most people shy away from because they are not comfortable with them,” Scott Jacob said.
The threesome agree it takes imagination and, frankly, guts because of the risks.
Many towns have older business structures, occupied on the first floor but vacant on the second or third floors — and the ability to lease the upper floors can help guarantee the profit on the whole structure, they said.
“We can show (owners) how to develop the whole thing — triple the income and make it profitable,” Bud Jacob said.
The “residential up/commercial down” strategy depends on finding young professionals to live in the structures, Scott Jacob believes.
“To bring Main Street back to life, you have to have people living downtown,” he said.
On total gut jobs, though, the main floor anchor is still the key.
“If we’ve got the commercial guy and we’ve got the building, there’s a good chance we can make it work,” Crawford said. “We’d like to see more commercial people reaching out to us. We like this concept and would like to see it work elsewhere. Let’s go get a building together.”