EDITOR’S NOTE: Since 1988, Trailnet has led or partnered in development of the bi-state regional trail network including several in Southwestern Illinois. In more recent years the non-profit agency’s role has evolved into healthy living programs, bicycling events and initiatives involving transportation policy and planning. Through its work and the work of partners it directly impacts local citizens, schools, businesses and communities throughout the region.

IBJ: You came on as director of Trailnet just a few months back, right? 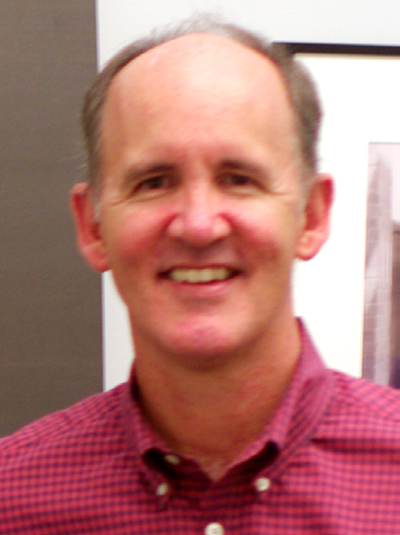 IBJ: What was your background coming in?

Pfremmer: I was a businessman. I owned a hospitality business, a couple different restaurants, and a dining/nutrition services management company called ‘Pfood Man.’ We had auxiliary services contracts with local colleges and universities around the state. Lindenwood in Belleville was one of them. I catered cafeterias and dormitories. I ran it for about 20 years. I also owned a couple of restaurants. One is still there, called the Wolf Public House.

IBJ: How did all that qualify you for the role you’re in now?

Pfremmer: That’s a good question. My story is interesting. I got into (the nutrition) business as a result of trying to live right. Just prior to starting my company, I kind of had a health reinvention, by way of having to get my health in order. I’d been for a very long time in the bar and restaurant business and traveling all over in the hospitality business, and my health caught up with me. I wound up in the hospital with pneumonia. I’d never quit working. I was smoking cigarettes. I was 50 pounds overweight.
So, I started riding bicycles. That turned into racing bicycles and promoting bicycle events. And then, becoming a spokesman in the community for health, fitness and wellness. That transferred into how I promoted my business. Because we were selling foods and good lifestyles, I was able to thrive.
At the same time, I was giving by way of strategic philanthropy to organizations that I felt served the cause of healthy minds and bodies. Trailnet was one of them. I made in-kind donations for a lot of the events that Trailnet did.
The executive director, Ann (Rivers) Mack, my predecessor, became a good friend. Entrepreneurially, she liked how I did things — and vice versa. She really left the organization with a strong foothold. And so, when I went to sell my company in 2012, I’d planned to take some time off. In July I was finished (selling) and by that time was on the board of Trailnet and she was stepping down. I knew I had the skill set because of my public speaking and being an advocate for community enrichment through art and culture and wellness programs. So I applied for the job and threw my hat in the ring. They did a national search and I ended up being the guy.

IBJ: What is Trailnet’s mission?

Pfremmer: If I had to boil it down to one sentence, it would be: We get people moving and we help the region build for better walking and biking. Right now, we lead at fostering active communities where biking and walking and transit are part of everyday life. We do that by writing policy, by being an advocate and by getting people to get behind facilities that are built collaboratively. We have about 2,000 members and about 12,000 constituents.
I’ve got a great board and I am very empowered. We want to guide our politicians and provide them with a vision of where we can go; a “here’s what it looks like, here’s what other cities are doing.”
My role is to capture the message and be able to tell the story of Trailnet. I’ve got all these smart people in my office, about 16 employees, and they range from planners and architects to program directors. They are a passionate, group of diverse people, and they stay in tune, but everything we do is data driven. There is data on bikeability, walkability, traffic safety, designing streets a certain way.

IBJ: How did Trailnet gets its start?

Pfremmer: When we first started (in 1988), we built Grant’s Trail (an 8-mile stretch in St. Louis). We acquired the land through various means. We were successful and (went on to build more trails).
In the early 2000s, Great Rivers Greenway (a voter-approved district that finances trail building and protection of green space) came about. St. Louis City, St. Louis County and St. Charles counties decided to tax themselves in order to create an extended trail system called the Great River Ring. That was a success and turned over to Great Rivers Greenway. Most recently we handed over the Chain of Rocks Bridge (in Madison), which was also a project that Trailnet spearheaded, and saved that bridge from closing. Just this past year, we made the switch. We signed over the bridge because Great Rivers Greenway was more equipped to handle the maintenance of that. I’m very happy to have Great Rivers Greenway in our community.

IBJ: Trails can be a vital part of a community’s well-being?

Pfremmer: Absolutely. We don’t build trails any more. But we do the planning. We write the policy and do the programs that stimulate that way of thinking. It really boils down to attracting and retaining people in our community. We have to appeal to what people want. We also have a responsibility to reduce the barriers among some of the user groups that are important, other than just those that can afford it and get access. The connectivity of the trails (to things like MetroLink and bus stops) provides economic inclusion, getting more people access to jobs.

IBJ: What have you done since you’ve been at Trailnet?

Pfremmer: We’re 26 years into this thing. Prior to getting hired I did extensive due diligence. I had done a couple of turnarounds of nonprofits as chairman of the board. I had somewhat of an understanding of how to manage nonprofits. I take a business approach, a financial sustainability approach, looking deeper into how they are funded and what their impact is or what it could be with partner organizations. I made a list of priorities that I needed to put into place immediately to build on the next 25 years. I thought the emphasis had to be on financial sustainability and advocacy — centered on high-level education, like op-ed communications vs. call to action, in-your-face type of stuff. I liked the fact that Trailnet has this credibility, and I want to take it to the next level. So, I’ve been busy, maintaining the credibility that we have … while working toward getting bikeable and walkable communities and business advancement and economic development.

IBJ: There are a lot of ways you can go from here.

Pfremmer: We have a bit of a brand jumblization because our name does imply that we do trails. We’re an advocacy group. We organize a lot of bike rides around the bi-state area; we undertake community enrichment projects. We’re educating business people who happen to want to build livability. We want to improve health and transportation and stimulate development so that the millennial generation will stay here. They want to live in the community; they want to work in the community. They don’t often want to get in the car and drive.

IBJ: You have mentioned the benefits of having trails close to business areas.

Pfremmer: Here’s what happens if you connect your central business district to a bikeable, walkable community: People just start coming. Not just one type of people, but everybody. You have a culturally rich community that’s interesting and vibrant. And it doesn’t cost a huge amount of money to maintain 25 years from now like highways always do.
There’s an organization called Strong Towns, and you should get on (the web) and read about it. Their philosophy is centered on the fact that suburban, big box (construction) and all of the infrastructure going into building these things is already broke and they don’t even know it. That (construction) does not provide as much retail income per acre as a 100-year-old downtown community that can be repurposed with alternate shops. That’s why (downtowns) are coming back.
What’s going on in the Cortex District (in midtown St. Louis) is a perfect example. You have a major anchor, IKEA, going in the center, but it’s a development district. The dollars to create the district came from Missouri Botanical, SLU, UMSL and BJC. It could have gone anywhere, but they put it in that central corridor, and now it’s the biggest economic development story going in all of St. Louis. Everything is starting to boom. And they are designing that entire thing around livability, mixed use and work, with the right amount of retail. Every community can do something like that.

IBJ: How is your budget set up?

Pfremmer: We have many sources of income. On the nonrestricted side, we have sponsorships, collaborative partners — Ameren, Emerson, the large companies who are interested in our work — individual and business memberships. We have major gifts. All that represents about 30 percent of our income. The rest comes from a collection of different grant opportunities and foundation and government work.

IBJ: Do you want to do more in Illinois?

Pfremmer: Where I’m taking Trailnet is to highly encourage a collaborative culture in the region. That’s my mission. I’m very much involved in doing that in the city and county right now. In Illinois, we have a lot of bike rides every year, but  need to do more. I would like to provide assistance to communities that are ready to propose or implement Complete Streets policies. We can help advise.