EDITOR’S NOTE: Gov. Bruce  Rauner’s office was invited to participate in this month’s IBJ Point/Counterpoint topic, but his communications staff, while acknowledging the request, did not respond by deadline. However, we let them know we would use the governor’s comments regarding right to work zones made during a recent media stop in O’Fallon, attended by the Illinois Business Journal. Following is the relevant portion of his address as it pertains to the subject. 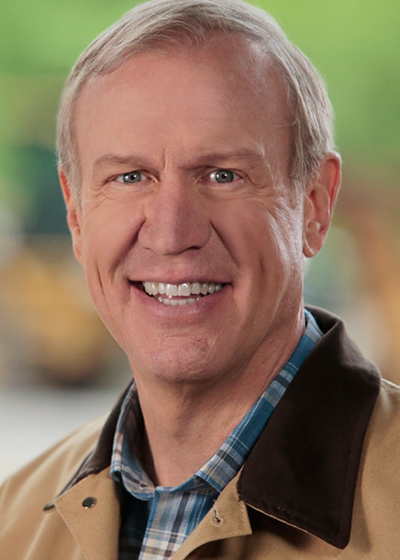 I’ve been (in Metro East) a lot in the last two years, and I’ll be here at lot in the next four years. I want to make sure the economy is booming, here in Southwestern Illinois and all over the great state.
We’re focused on getting Illinois turned around, getting our economy growing so we are getting great careers for everyone who wants to work here, in our great state, by making Illinois more competitive.
One message I’ve tried to deliver everywhere I go is, we can’t cut our way of our challenges, we can’t tax our way of our challenges, we’ve got to grow. We’ve got to become a growth state. Pro investment. Pro healthy economy. Pro rising incomes with great careers for everyone.
That means changing the regulatory climate here in Illinois. That means changing worker’s compensation. It’s too costly. It’s uncompetitive. That means changing the unemployment structure in Illinois. It’s too costly and uncompetitive. That means changing the lawsuit abuses and the high cost of insurance.
And (it means) taking on the challenges about labor regulations. There is a lot of discussion about these issues around right to work.
We’re spreading a message about the real issues in Illinois: We do not need to be a right to work state. I do not support Illinois becoming a right to work state. However, we do need to get Illinois on the list. There are many states that are right to work, and many that are closed shop. Many companies, many corporate employers around America and the world will only look to expand or move to open, flexible states. Illinois is not on the list of open, competitive states. We need to get on the list.
To do that, we just need to get a few counties or a few municipalities  to decide to become open, employment-flexible areas. We don’t need everyone to do it. We just need a few counties to do it. And that’s allowed under the federal labor law if the state authorizes them to make that decision.
So, what I’m asking is, let’s let our local voters decide that issue. Let the voters here in St. Clair County decide if they like the employment flexibility in the county or not. They can choose. Either way is fine. Madison County — would they like to have that employment flexibility? They can choose, if they want it, great, and if they don’t that’s OK.
Let the counties decide, then I as governor can recruit manufacturing firms to come to Illinois that today we have been losing — to Indiana, Michigan, Wisconsin, Iowa, Tennessee, Texas, the open, employment-flexible states. Even over in Missouri, where there is a right to work bill pending in the legislature right now and may well pass soon.
We need to compete and we need the flexibility. We don’t need it everywhere, but we need it in some locations.  So our message is: Let’s let local voters decide that issue and decide the competitiveness of their own economy.
We should have that same local control on issues in the schools. I believe it’s important to let local voters to decide what gets collectively bargained inside their local governments.
The government and the schools belong to the people of Illinois. They don’t belong to any union leaders or special interest groups — they belong to the people of Illinois, and the people should decide if the teachers need to join unions to teach their children. Yes or no? Does someone who works for a particular city government need to join a union to work for the people? That should be decided by those folks.
That’s the way the federal government does it. They restrict what gets collectively bargained. And 29 states also restrict what gets collectively bargained in the government because they know it’s hard for politicians to stand up to insiders and union leaders. You need a restoration of balance of power between the taxpayers  and voters and insiders of our government.
Our whole agenda is local empowerment and local control. That will help turn our government around and also bring our tax burden down by getting control of our expenses.
The most important thing is to bring financial discipline to Illinois. We’ve been spending money we don’t have. We’ve had out-of-control spending in state government for years and years. That’s the No. 1 complaint I hear from job creators and employers. They don’t have the confidence in the fiscal responsibility of the state of Illinois and may leave as a result.
We need discipline.  Doing that is hard. Saying we’re going to spend only the resources we have — that hasn’t happened in Illinois in a long time. It’s culture shock. People in Springfield are stunned. But we’re not going to spend money we don’t have.
Now, the critical point is, some of the money is going to not flow into local governments. That’s true. However, we are going to empower local governments — mayors, county chairmen, village presidents —  by letting them get control of their own spending. Let them decide who has to collectively bargain. Who has to join a union. Whether their local economies can compete with right-to-work states. They’ll be empowered to cut costs inside their governments.
I’m saying to the mayors and county chairmen, support our reform agenda. That will free up resources at the state level that I can put more money into the local government distributive fund, which I will do if we can get our reforms done.