From the Illinois Business Journal 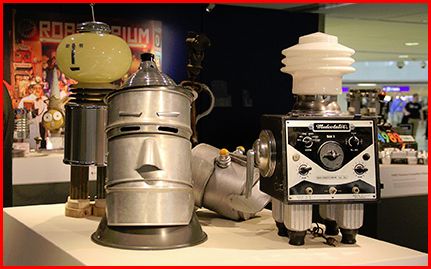 The Gallery’s latest exhibition in Terminal 1, “The Robots are Coming,” is curated by St. Louis artist Bill Christman, who has turned a childhood passion of robots into a lifelong mission of exploring the technological creations through history, education and art. The exhibition, located in the baggage claim near the exit of the C Concourse, runs through August 9.

The exhibition showcases the vast collection of his hand-crafted robots that are created with everyday finds, from antique ceramic insulators to milkshake blenders. He’s also re-purposed discarded mechanisms like old phones, hair dryers, circuit boards and remote controls for parts, which find new life in his robots.

Besides the collection within several art cases, the exhibition also features a 6-ft tall robot and an 8-ft welcome sign that allows passengers and guests to take their very own “robot selfie” as a little takeaway for visiting.

Christman has been building robots since 1952 when he was 6 years old. His first robot was an oatmeal box covered in tin foil and animated by wind-up toys that he had disassembled for their moving parts. Like many other children of the 1950s, he dreamt of making a robot that would do his chores for him.

Christman uses what he describes as “a form of gentle parody and genteel anarchy” in his craft while addressing robots as a serious contemporary issue, that of machines and automation eliminating the cultural usefulness and value of human labor. Christman sees the cuteness of robots as a “seductive quality of advancing modern technology.” Christman, through his alter-ego, Otto von Bismark Schnarr, currently displays his robots at the Robotorium exhibit in the City Museum in downtown St. Louis.