FAIRVIEW HEIGHTS – The Leadership Council Southwestern Illinois and a crowd of more than 400 people saluted veteran educators this month for their roles in driving regional growth.

The annual awards program salutes those individuals and organizations that have displayed outstanding leadership and have positively impacted the region. With the theme Growth Fueled by Educational Excellence, the event recognized the following as co-recipients of the 2015 Salute to Southwestern Illinois Award:

Hightower was honored for his years of service to the educational community. He retires from the system at the end of this school year.

During the awards presentation, it was noted that these fine institutions have captured headlines in recent years for their major investments, economic impact and various honors and awards recognizing them among the best in the country in a range of different categories. 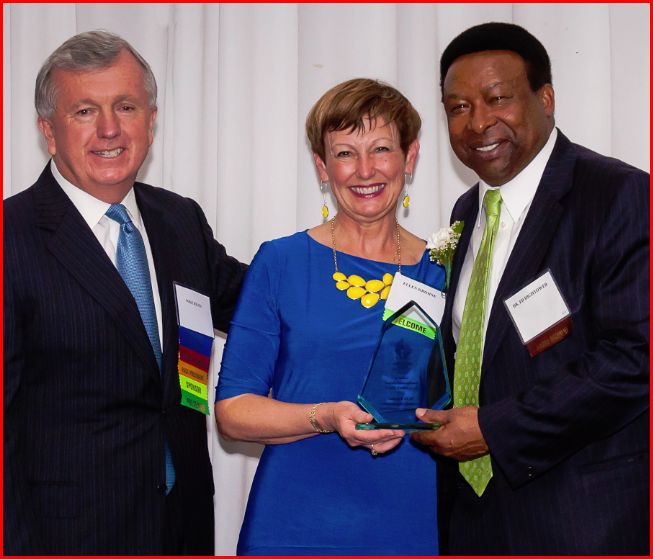 “There’s no question that each is a positive force within our region,” said Ellen Krohne, executive director of the Leadership Council Southwestern Illinois. “When looked at collectively, however, their positive impact takes on even greater significance, as their shared commitment to educational excellence fuels the growth of our region.”

Over the past 10 years, the combined total of the annual budgets of the five colleges and universities has almost doubled, from $266 Million to almost $500 Million. During the same time frame, the number of full-time faculty employed by these institutions has also grown by 27 percent, while the number of part-time faculty jumped 23 percent. A total of almost 2,700 faculty members now serve the almost 40,000 full- and part-time students attending these institutions.

The past decade has also seen investments in a number of noteworthy capital improvement projects that are changing the landscape of every campus and adding to the learning opportunities available throughout the region. The quality of the region’s educational system has also been enhanced as extension centers have become full-service campuses, colleges have transitioned to universities, outstanding new research facilities have opened and scores of new degree programs have been added.

“All of this has contributed to positive enrollment trends and is improving the quality of our workforce, helping to ensure that our region continues to grow and thrive in the years to come,” noted Leadership Council President Mike Riley.

As an added highlight, the event also spotlighted Southwestern Illinois primary and secondary level teachers, administrators, support staff and school board members who received recognition awards during 2014. Those recognized were recipients of awards through:

• Those who Excel, which is sponsored annually by the Illinois State Board of Education to honor individuals who have made significant contributions to our state’s public and nonpublic elementary and secondary schools;

• The Peabody Energy Leaders in Education program, which honors education professionals – from teachers and coaches to librarians and counselors – recognizing the heroes in education who help our children achieve their true potential; and

• The Emerson Excellence in Teaching Awards program, which annually recognizes more than 100 St. Louis metro area educators — from kindergarten teachers to college professors — who are examples of excellence in the field of education.

“We’re so pleased to be able to incorporate recognition of these K thru 12 leaders for the role they are playing in educating the workforce of the future,” added Krohne. “There is a direct link between the economic development of our region and the availability of a quality workforce, and we cannot overlook the importance of the leadership and guidance they provide during such a formative time in the lives of the students they serve.”

The evening celebration was held at the Four Points by Sheraton in Fairview Heights.

The teachers, not in a particular order, their awards and their county are: