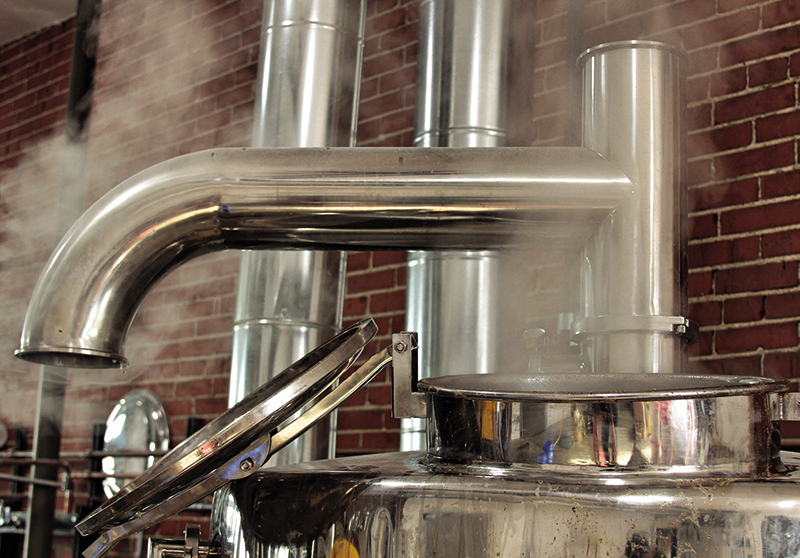 By DENNIS GRUBAUGH
Southwestern Illinois entrepreneurs are brewing up a storm, hoping to quench a thirsty public.
In the past five years, at least nine microbrewery or beer-making operations have been launched with varying degrees of success in Metro East. They range from a basement brewer, selling his product for consumption at area taps, to a bottler who made a living producing soda before converting a significant portion of the operation to the craft brew market.
Some of the businesses began as brewery/restaurant combinations. At least one encourages customers to bring food with them.
In general there is a lot of character and a love of beer, and most of it has bubbled to the surface in the past three years.
“The area is just catching up with the trend that’s been going on for years on the coasts. We were pretty much a wasteland during the first two or three expansion trends in the rest of the country,” said Joe Billhartz, who has long worked in the beer business in Southern Illinois. Today, after years in sales for both retailers and distributors, he runs his own beer-line cleaning business. He caters to a growing trade and knows most of the local players.
He’ll also tell you that brewing is no sure bet.
“When something becomes popular, everyone wants to get in on the bandwagon. But there have been at least three major shake-up cycles (since the nation trend began), contracting the numbers of breweries, and when they expanded again, a lot of brewers were weeded out,” Billhartz said.
Central to success is having a good business plan, knowing the market and not underestimating the financial commitment. That same logic applies to most new businesses, he said.
“A whole lot of brewers think they can make it commercially, and a whole lot who tried, didn’t,” he said.

However, a bunch who did try, made out just fine, judging from numbers tracked by the Brewer Association, a national group based in Colorado:
– Regional breweries across the country grew in number from 50 in 2006 to 119 in 2013 (the latest numbers).
– Microbreweries during that same period grew from 370 to 1,412.
– Brewpubs grew during that timeframe from 989 to 1,237.
The association said the success rate is going up for both microbreweries and brew pubs. In 2013, some 109 brewpubs opened across the country, while only 24 closed.
During that same year, some 304 microbreweries opened while only 20 closed.
A microbrewery or craft brewery is a brewery that produces a small amount of beer. Exact definitions vary, but the terms are typically applied to breweries much smaller than large-scale corporate breweries and independently owned. Generally, their emphasis is on quality, flavor and technique.
A related term, “brewpub,” refers to a pub or restaurant that brews its own beer for sale on the premises.
In Illinois, the numbers have also foamed over.
As of 2013, Illinois had 83 craft breweries, ranking 34th in the nation, and up from 54 in 2011. The state enjoyed a $1.324 billion economic impact (as of 2012), placing it at sixth in the U.S., and produced 136,999 barrels of craft beer, landing it in 22nd position.

Matt Flach, who opened Recess Brewing on Main Street in Edwardsville last fall, watched the growth of breweries first hand from his former home in Chicago.
“I lived in Chicago for the past decade and when I got there, there were, maybe, three breweries. When I left I think there were 36,” Flach said.
His love of brewing began when his sister bought him “a 2-gallon kit for a Christmas present.” For several years, he experimented at home, leaning heavily on his biology and chemistry background.
“Things just kind of took off after that,” he said.
At Recess, Flach works off a five-barrel system, meaning about 160 gallons of beer per batch.
“Within that, we have three fermenters, so we can have three different beers fermenting at the same time,” he said.
How tough is it to get established in the beer business?
“It depends on what kind of niche you’re going for,” Flach said. “If you’re looking to compete for shelf space in a grocery store it would be kind of hard, but we have a business model that doesn’t exist down here, having beers only in our tap room and having the growler service that we do. It’s been a much smoother transition that I thought it would be. People have been nothing but positive.”
To get set up as a brewery, Flach had to endure a four- to five-month federal licensing process. At the local level he had to get state license and sales tax certification.
“Startup was kind of a pipe dream for four to five years. I became disenfranchised as a teacher in Chicago (where he spent 10 years before coming to Edwardsville).” He bought two-storefront buildings in November 2013 and spent a year on construction combining them to one.
“It turned into a total gut rehab. We hadn’t planned to do it that way, but we tore it all down to the bare bones and built it back up.”
All told, the 3,000-square-foot operation is projected to yield about 300 barrels in its first year. That from an investment that has approached $300,000.
“If we get into distribution we might go beyond 500 barrels.” However, there is something to be said for keeping batches small, in terms of quality, he said. “Then if the crowd doesn’t love it, you’re not out a bunch of cash.”
He describes the brewers in this area as interactive. “Everybody’s friendly. There’s no competition. They all know they’re small fish in a big ocean.”
Historically speaking, while there has been a great surge in brew interest in the past two decades, the count is nowhere close to the days of old, Flach said.
“When you look at per capita in terms of breweries in the United States, we are still well below pre-Prohibition,” he said. “We’re nowhere near a saturation point.”
Teffy Beard thinks she’s got a niche, too, and is quickly working to fill it. She and business partner Mike Harris of Troy are preparing for a late summer debut of a brewing operation at a restaurant they own, the Railshake Brewery, 504 Walnut St. in Highland.
The restaurant’s actually been opened since 2013, begun by a previous owner who sold it to Beard, his former general manager, on Oct. 1.
“Our specialty is Cajun/Creole, and we have 18 beers on tap. All of them are microbrews except Stag, the only domestic on tap.
The plan is to begin brewing a few different batches of beer when equipment arrives this fall. It’s being made by a Wisconsin company that will also install it and stick around long enough to help the operators learn to use it.
A new addition called the brewhouse was built on the side of the Highland building to accommodate the brewing system.
Partner Harris has been home-brewing beer for about 20 years. He met Beard as a customer of the former business.
“He would talk to us about beer and we sort of hit it off,” Beard said. “I’d thought about purchasing on my own, but then I started thinking about brewing beer and thought I didn’t know what the hell I was doing, so I called him.”
She added: “He is fantastic, everything he’s brewed everyone loves. People are patiently waiting.”
The building itself is one of the most historic structures in Highland, constructed as a hotel for the railroad in 1856, hence the brewery name.
The building had a bar in it off and on through the years before the structure was vacated about three years ago.
“It was condemned; the city was going to tear it down,” Beard said. “(The previous owner) got it for next to nothing and put a ton into it, and now it’s the nice place to go in town.”
She declined to say how much money was invested under the previous owner.
Beard, who was born and raised in Highland, sees no end to the popularity of craft beers.
“I think it’s still exploding. Everyone likes craft beer. When I turned 21, everyone liked Bud Light. Now, I’m 32 and hardly anybody drinks that.”
Some observers say that craft beer makes up about 5.5 percent of the Southwestern Illinois beer market, so there is room for growth. By comparison such beer equals more than 45 percent of the market in places like Portland, Ore.

Here is a list of brew-related facilities that have opened in recent times in Metro East:
Posted in 2015 April Issue

No Violence Alliance may be cure for our homicide plague