EDWARDSVILLE – Increasingly recognized as a leader in the research of gender representation in media and politics, Southern Illinois University Edwardsville’s Dr. Elza Ibroscheva has been awarded the William and Margaret Going Endowed Professorship Award. 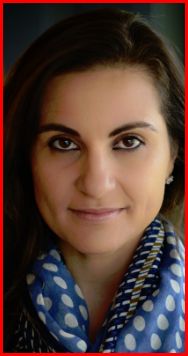 Ibroscheva (left) is an associate professor and director of graduate studies in the SIUE College of Arts and Sciences.

“Dr. Ibroscheva has emerged as one of the foremost authorities on gender issues in the post-Soviet era,” said Gary Hicks, chair of the Department of Mass Communications. “We are very fortunate to have a scholar of her stature on our faculty.”

The late Dr. William Going established the award in honor of his wife Margaret. It recognizes CAS faculty who have outstanding teaching, scholarly and/or creative activity accomplishments.

“Awards such as these provide important support for one of the main purposes of a public university—the generation of new knowledge,” added Larry LaFond, associate dean of CAS.

“The reception of this award has certainly filled me with joy, and a sense of pride and humility at the same time,” said Ibroscheva.

According to Ibroscheva, her research focuses on the media’s portrayal of women, particularly female politicians. Her interest in this topic was originally formed by political developments in her home country of Bulgaria.

“I began publishing articles on the theoretical concept of gendered mediation,” said Ibroscheva. “It is the theory that argues that media tend to portray female politicians differently than male politicians, and that in fact, that portrayal changes the political discourse to an extent that often disadvantages the representation of women in politics.”

While Ibroscheva’s research is primarily focused on these trends from a “global south” perspective, it has widened the geographic reach of scholarship on the topic.

“I get so excited that were able to create this tapestry of experiences stretching all the way from Argentina, to Israel, to Pakistan,” explained Ibroscheva. “My work has highlighted the similarities, and yet the uniqueness, of female politicians’ experiences as they face challenges in the media.”

Despite varying advances and achievements among female politicians around the world, Ibroscheva maintains the specific gender lens the media uses in its coverage re-emphasizes the idea that politics is a masculine sport.

“Frequently we don’t pay attention to this kind of coverage, or we dismiss it as just the way the media works,” said Ibroscheva. “It often diminishes and trivializes the role of women. There’s certainly no place to ask female politicians about their hair-dos or fashion sense. It’s troubling. My mission in my academic life is to address this gendered mediation.”
How this trend can be altered or negated remains to be solved.

“Maybe it calls for the training of journalists who need to perhaps reassess their own approaches to how they treat and how they focus on the female politician versus the male politician,” said Ibroscheva. “Also, what can we do as media educators to change these dynamics and narratives?”

As part of her award, Ibroscheva will share her research at a public lecture on the SIUE campus this spring. Titled “If Women Ruled the World: Reflection from the Intersection of Women, Politics and Media,” Ibroscheva plans to use visual and audio examples to create a conversation among attendees.

“This is not an attempt for me to shine some sort of heavy feminist critique upon the political discourse, but it is, I think, an opportunity for me to call for an honest debate about how we understand that world of politics,” emphasized Ibroscheva.

Future areas of research Ibroscheva plans to pursue include the media’s coverage of the first ladies of the socialist times and female politicians’ use of social media, when they self-represent.