EDWARDSVILLE – Kevin Powers, an executive most recently with a St. Paul, Minn.-based banking corporation, has been named as the new head of Bank of Edwardsville, to replace the retiring Thomas Holloway. 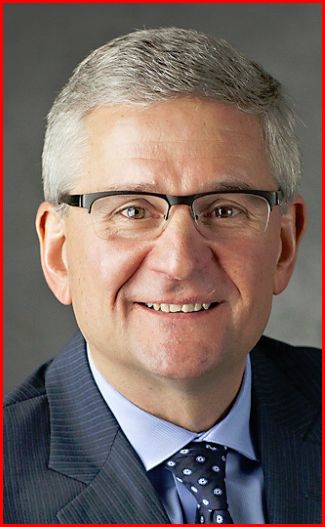 The announcement was made by the bank this morning at an all-staff meeting.

Bank officials called Kevin Powers (left) a highly successful banker and banking executive for the past 35 years. He was unanimously approved by the bank’s board during its meeting Wednesday.

“Speaking on behalf of our board of directors, I am pleased to announce that Kevin Powers has been selected as the 13th president and CEO of TheBANK of Edwardsville,” said Robert Plummer, chairman of board, said in a statement. “We’re confident that Kevin will not only continue the dedication to our core values of tradition, innovation and community service, but will in fact build upon those beliefs which have made us the leading community bank in the region. His extensive background in banking, and the success he’s earned in every area of the industry, will make him a tremendous asset to TheBANK.”

Powers, 59, and a native of Grand Forks, N.D., who helped build Bremer Financial Corp. into a regional power in Minnesota and North Dakota, said he’s excited about the opportunity.

“I did a lot of research on TheBANK of Edwardsville and found an institution with an incredibly rich, 147-year history and a culture and values that are closely aligned with mine. I also found a very stable, safe and strong financial institution with a reputation of customer and community service second to none in the area,” Powers said in a statement. “I’m thrilled to have been offered this opportunity with TheBANK of Edwardsville and I couldn’t be more excited about joining such a great team. I look forward to helping TheBANK continue to grow and prosper.”

Following an independent bank acquisition by Bremer Bank in Grand Forks, Powers moved back home in 1993 to manage all aspects of the new location for the bank. Powers’ success in North Dakota prompted Bremer to expand in the state with a charter in the Fargo/Moorhead area, where he was named president and CEO. As president, Powers opened four offices in the market and turned the start-up operation into a highly successful venture with assets growing to $1.6 billion and 15 branches throughout North Dakota and northwest Minnesota.

Overall, Powers has spent more than 20 of his 35 years in banking as a president at Bremer, and was an integral part in helping Bremer Financial grow to more than $9 billion in assets with more than 100 locations throughout North Dakota, Minnesota and Wisconsin.

According to William Alexander, executive vice president at the bank, that experience and track record of success, along with his energetic approach and leadership style, make Powers a perfect fit.

“Kevin is a proven leader in our industry who has a tremendous track record of growing market share, revenue, earnings, and shareholder value in a safe and sound manner within the regional community banking model,” Alexander said in a statement. “That success, coupled with his personality, energy and management experience and style, will be an excellent complement to TheBANK.”

Powers and his wife, Jean, have three grown children. He will begin his duties on March 2 and is currently relocating to the Edwardsville area.

Powers replaces Tom Holloway, who will have served as president and CEO for 10 years before announcing his upcoming retirement. Under Holloway’s leadership, TheBANK grew from 14 to 18 locations while its assets have grown each year, rising from just over $1 billion in 2005 to nearly $1.7 billion today.

Kay Cassens, a director of the bank and its holding company, The Banc Ed Corp., and daughter of late, longtime director and chairman of the board, Albert Cassens, joined director Michael Cassens and Mark Shashek, chairman of The Banc Ed Corp., in releasing a statement on behalf of the entire board and Cassens family, stating: “We look forward to welcoming Kevin Powers and his vision for the future, and are very thankful to Tom Holloway for his successful tenure of leadership and stewardship at TheBANK.”

Plummer also praised Holloway for his decade of dedicated service.

“Tom has been a great leader and a tremendous asset, helping guide TheBANK of Edwardsville to stable and continuous earnings during the past 10 years,” he said. “He served TheBANK and the local communities with honor and distinction, and we wish him nothing but the best in his retirement.”