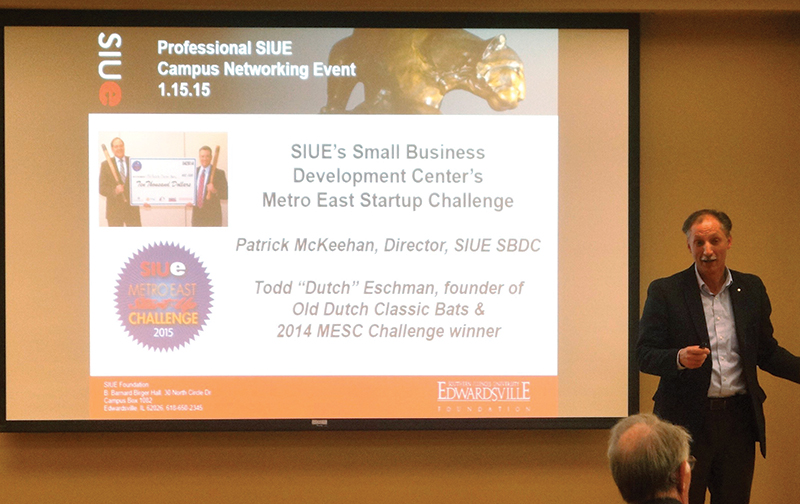 The Illinois Metro East Small Business Development Center at SIUE is planning to kick off its second annual Metro East Startup Challenge later this spring. Last year’s inaugural venture attracted more than 100 budding entrepreneurs. There were 30 qualified first-round applications, six finalists and two winners.
“Last year’s Challenge came together quickly and we were learning on the fly,” said Patrick McKeehan, SBDC director. “It was a very interesting experience; there were definitely things that we think we can improve; but I think the results more than exceeded our expectations.”
The Metro East Startup Challenge awarded $15,000 in prize money last year. $10,000 was given to first place finisher, Old Dutch Classic Bats. Owner Todd Eschman, of Swansea, started in 2013 making vintage baseball bats in his garage that were used in games played by 1860s rules. Growing interest in his products made Eschman realize that he might want to convert this hobby into a full-fledged business.  While winning the Challenge gave Old Dutch Class Bats some financial help, the learning experience from going through the business plan process is what Eschman claims was the most valuable.        The second-place cash prize of $5,000 went to Stumpy’s Spirits near Columbia, Ill. Joe Stumpf, founder of Stumpy’s Spirits, was already working on his idea of using the harvest from his seventh-generation family farm to create distilled alcohol. He said entering the Challenge helped him think through the many issues involved in turning this idea into a real business. Stumpf’s “grain-to-glass” micro-distillery is scheduled to open in early 2015.
“I had visions — probably unrealistic — that we would receive numerous high tech applications and attract the next Face Book or Twitter to our region.  What we ended up with was bats and booze,” McKeehan said.  “But I think this realistically reflects what is the Metro East — we make things! This region still has a very strong manufacturing heritage.  We have people who are willing to take on the challenges of manufacturing in the U.S.”
This year, McKeehan is setting his sights a bit higher, looking to raise $30,000 in prize money. Of that amount, first place will receive $15,000; second place will win $7,500; and third place will get $5,000.
“We will continue to target high-growth business opportunities, which include manufacturing, information technologies, and businesses connected to life science, health science and the health-care sectors,” McKeehan said. “Our interpretations of these industry sectors are fairly broad. We don’t want to discourage participation but want to make sure we focus on using the Challenge to generate long-term economic impact for our region.”
McKeehan added: “These industries also match well with the expertise, support and talent being developed at SIUE.”
The 2015 Challenge is open to pre-venture business concepts along with startups in business less than three years. McKeehan said the Challenge judges will be looking for  solid business concepts with growth potential and well-constructed business plans.  Applicants must have a clear understanding of their market, customers and financial projections.
McKeehan said that the 2015 Challenge will use again a multi-step process. In the first round, there will be an on-line entry form that all applicants will complete along with answering four to five business concept questions. First-round applications will be reviewed and a winnowing process will occur, narrowing the field going into the second round.
That round will consist of developing a condensed business plan — about a 12-page summary with financial data attached — and additional details regarding their concept and management team. Second-rounders will have access to SBDC staff and business mentors to help review their business plans.
“By early August, the Challenge moves into its last round where we narrow down to our finalists and they make a live pitch presentation.  Finalists will be given five minutes in front of a panel of judges to pitch their business concept,” McKeehan said. “To guide participants on how to properly present their business plan, we are planning a workshop before the live pitch event.”
McKeehan is seeking individuals or businesses that would like to get involved in sponsoring the competition or providing other support. He said he expects to officially announce the Challenge in late March and open the application process in April with the goal of making 2015 more successful than last year.
“We’re expanding our reach and getting more people involved this year,” him said. “I envision this as a long term effort that we can repeat many years with each building upon the success of the previous. We are extremely grateful to those individuals and organizations that supported us last year. The enthusiastic amount of participation and interest last year indicates the Metro East Startup Challenge has great potential going forward.”