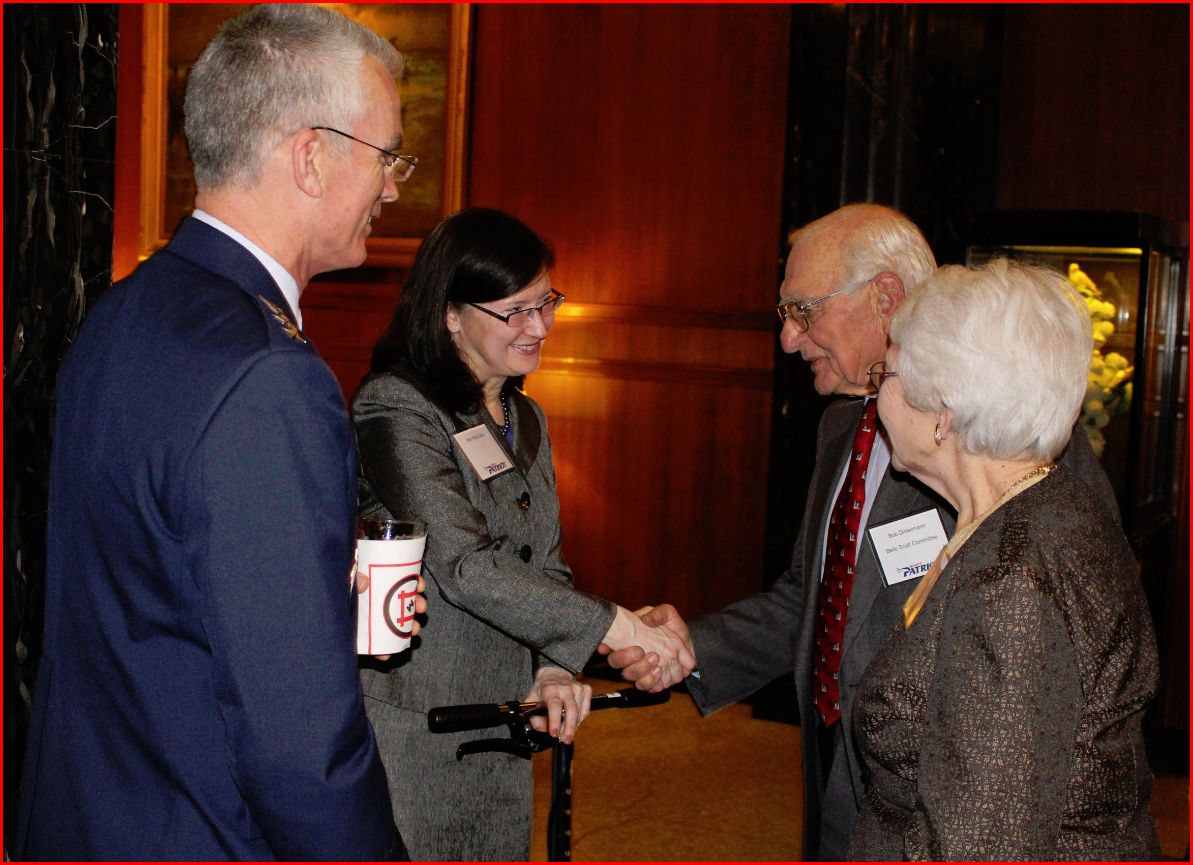 Gen. Paul Selva and his wife Ricki, left, with Bob and Judy Dintelman.

Gen. Paul J. Selva and his wife Ricki were honored this month at a reception celebrating his recent appointment as commander of the U.S Transportation Command at Scott Air Force Base.
Dignitaries and business leaders from both sides of the river gathered at the Missouri Athletic Club in downtown St. Louis to showcase the region’s ongoing appreciation, respect and support for Scott Air Force Base and congratulate Gen. Selva on his new position and continued service to our community and our nation.
The reception was hosted by the Leadership Council Southwestern Illinois, Civic Progress, The Regional Business Council, the St. Louis Regional Chamber and the Belle Scott Committee.
General Selva has achieved over 30 years of military service. During this timeframe, he has held command positions at the squadron, group, wing and headquarter levels, and has also accumulated more than 3,100 flying hours in a variety of aircraft. General Selva initially performed duty at Scott Air Force Base from June 2002 to August 2006, serving as the Tanker Airlift Control Center’s Vice Commander and Commander, as well as TRANSCOM’s Director of Operations. He left America’s Heartland for a five-plus year stint at the Pentagon, working on the Air Staff as the Air Force Strategic Planning and Air Force Quadrennial Defense Review Director and then as the Assistant to the Chairman of the Joint Chiefs of Staff. In October 2011, General Selva became vice commander of Pacific Air Forces, Joint-Base Pearl Harbor-Hickam, Hawaii, and 13 months later, returned to Scott to lead Air Mobility Command. Since May of last year, he has commanded TRANSCOM, which serves as the single manager for global air, land and sea transportation for the Department of Defense.
Mike Leopold, a member of the Leadership Councils Military Affairs Committee, introduced Gen. Selva to the guests gathered in his honor.

“General Selva, we would like to express our heartfelt appreciation to you for your tireless service to our nation and for the impact you, and your colleagues at Scott Air Force Base, have on our local communities,” noted Leopold. “And to your wife, Ricki – thank you! The sacrifices you make on a daily basis do not go unrecognized. It is with tremendous respect that we also express our gratitude to you.”

Selva also addressed the crowd, thanking the Leadership Council for its patience in working around his challenging schedule in order to host the event. He shared insight on the work that TRANSCOM has been engaged in in recent months and called attention to Air Force Times’ recent ranking of Scott Air Force Base as the #1 base in the nation for airmen. He credited the No. 1 ranking to the people in the room, and the countless others in the communities around Scott AFB and across the St. Louis region that offer unwavering support to the airmen and their families. Citing the words of retired Gen. Jack Griffith, who chose to remain in the Southwestern Illinois region even after his retirement from the military and wrote a commentary addressing the Air Force Times’ Ranking when it was released, Selva noted, “The reasons for Scott Air Force Base’s No.1 ranking are all around us.”

The event was originally planned as a joint celebration to also recognize General Darren McDew, who has served as commander of the Air Mobility Command at Scott Air Force Base since May of 2014. Unfortunately, Gen. McDew had a scheduling conflict arise that prevented him from being at the event, but his new role and contributions were also recognized by Leadership Council President Mike Riley, who served as emcee for the evening.