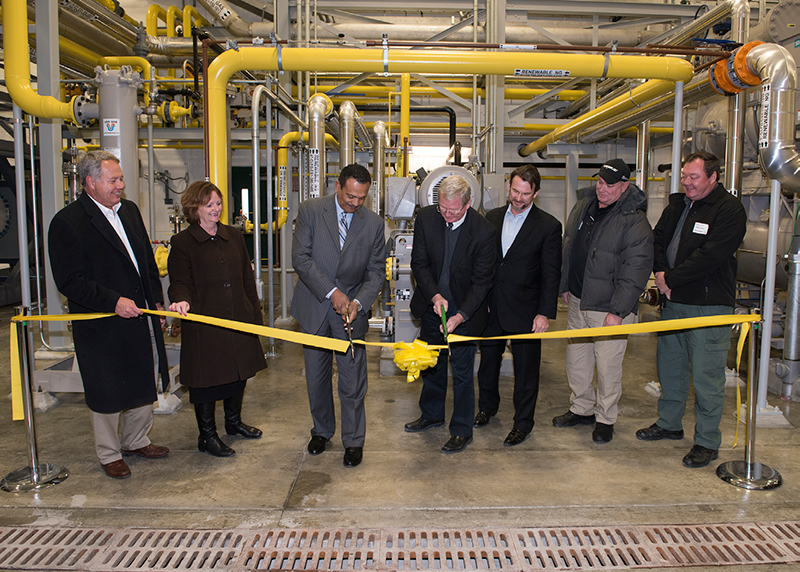 FAIRMONT CITY — This month, the region’s largest waste-handling operator begins to cash in on trash gas.
Waste Management will use its newly opened Renewable Natural Gas Facility to create pipeline-ready natural gas from the landfill gas produced at its Milam Landfill in Fairmont City.
As of Dec. 1, the natural gas is being injected into the on-site Ameren Illinois pipeline for withdrawal at other locations, including some Waste Management facilities. The natural gas is used to heat homes or fuel truck fleets and other equipment that run on compressed natural gas.
The facility, dedicated in November, is designed to process approximately 3,500 standard cubic feet per minute of incoming landfill gas. That’s about what it takes to fuel about 200 Waste Management CNG collection trucks each day, and represents more than 5 percent of the natural gas used in Waste Management’s entire CNG fleet per day.
Waste Management of Illinois currently has more than 100 CNG trucks in its fleet, displacing about one million gallons per year of diesel fuel.
It took about 13 months to complete the project.
“The Milam Renewable Natural Gas Facility is the first facility of its kind we’ve actually built from the ground up,” said Jim Trevathan, executive vice president and chief operating officer for Waste Management. “This innovative facility utilizes renewable landfill gas, and purifies it to a high-quality natural gas that in turn feeds into the adjacent pipeline to fuel our growing fleet of CNG trucks. This truly maximizes available resources while creating a new and beneficial use.”
Richard J. Mark, president and CEO of Ameren Illinois, said his company strives to operate in an environmentally-responsible manner.
“At Ameren Illinois, we are investing in new technology upgrades to our natural gas delivery system, so when we were approached by Waste Management for this first-of-its-kind collaboration, it made perfect sense to us,” Mark said.
The Ameren pipeline is located on Milam’s property immediately adjacent to the RNG facility. A metering station, built to Ameren specifications, was included in the facility design and construction.
Landfill gas is a byproduct of the natural decomposition of landfill waste. It is a renewable source of energy endorsed by the U.S. Environmental Protection Agency as an alternative to fossil fuels.
Once captured, the gas is filtered and compressed and can be used to fuel an engine or a turbine to generate electricity. At the new Milam Renewable Natural Gas Facility, the landfill gas is further processed to produce pipeline-quality natural gas.
The existing Milam Landfill-Gas-to-Energy facility produces 2.4 megawatts of renewable energy. The output from the power plant is now directly connected to the new Renewable Natural Gas Facility, providing the power needed to run the new facility.
The setup is very cost effective, Waste Management spokeswoman Lisa Disbrow said.
“We are providing ourselves energy at Ameren’s wholesale rate rather than the customer retail rate,” she said, in an email response to questions from the Illinois Business Journal.
The Renewable Natural Gas Facility also reduces the site’s emissions. Since the gas is treated, rather than burned onsite, Waste Management anticipates a 60 percent reduction in emissions of carbon monoxide, nitrogen oxides, and particulate matter.
The process could be repeated elsewhere in its system, Disbrow said.
“Our success with this project will be used as a model to evaluate other projects, but we do not have any identified at this time,” she said.
The $19 million Renewable Gas Facility was partially funded by a $2.4 million grant from the Illinois Department of Commerce and Economic Opportunity and the Illinois Energy Office. Construction of the facility provided the equivalent of 17 union jobs over a 10-month period, and three operational jobs.
“We celebrate with Waste Management on the opening of this new facility,” said Illinois EPA Director Lisa Bonnett. “This project is a great example of proactive measures that will improve our environment while driving Illinois’ economy forward.”
The Milam Renewable Natural Gas Facility is the company’s third plant to convert landfill gas to natural gas. In California, Waste Management collaborated in the world’s largest plant to convert landfill gas to ultra-low-carbon liquefied natural gas (LNG). With greenhouse gas emissions associated with this fuel, more than 80 percent lower than those of diesel, this is the cleanest fuel available for heavy-duty trucks. The facility produces up to 13,000 gallons of LNG per day and helps to power the company’s fleet in California. In Ohio, Waste Management processes about 3,000 SCFM of landfill gas and delivers it to a natural gas pipeline.
Waste Management has 134 landfill projects using landfill gas to generate electricity, produce renewable gas, or displace fossil fuel. These projects produce the equivalent of more than 650 megawatts of power capacity, enough to power almost half a million homes, and displace the equivalent of about 2.5 million tons of coal per year.
Disbrow was asked what sort of revenue is projected by selling the gas to outside concerns.
“Renewable natural gas produced from sites like the Milam facility cost more to produce than conventionally produced natural gas (at current market prices),” she said. “However, because of incentives like the grant provided by the Illinois Department of Commerce and Economic Opportunity and Illinois Energy Office, the production and use of renewable natural gas becomes economically competitive.”
The landfill-produced gas represents a savings for fuel for Waste Management’s trucks, Disbrow said.
“The renewable natural gas will offset the use of fossil natural gas for our CNG fleet in the Chicagoland area and in other locations throughout the U.S. Several fleets are converting to natural gas. Our company wide fleet currently includes more than 3,500 natural gas trucks, the largest of its kind in the waste industry,” she said.
Waste Management is based in Houston and is a provider of comprehensive waste management services in North America. Its subsidiaries provide collection, transfer, recycling and resource recovery, and disposal services. It is the largest residential recycler and also a leading developer, operator and owner of waste-to-energy and landfill-gas-to-energy facilities in the United States.