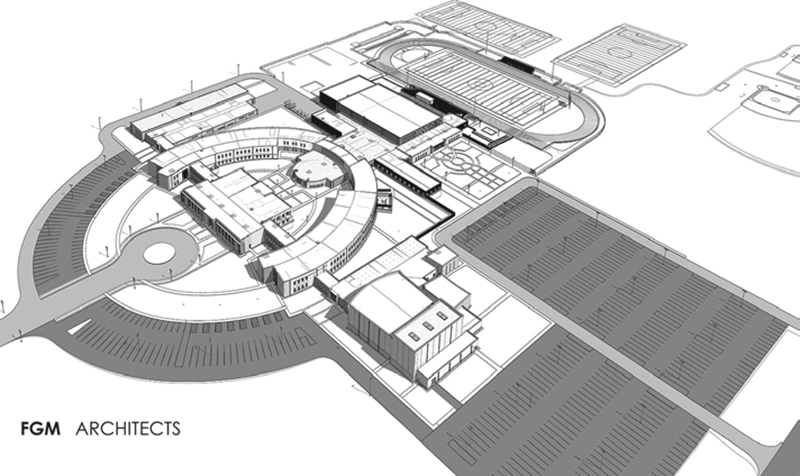 Construction on the new Mount Vernon Township High School is underway. Quality Testing and Engineering, Inc. contributed its geotechnical services to the project and continues to monitor the construction progress.
The new $70 million high school, the second-largest single school building construction project in the state of Illinois, will be approximately 315,000 square feet and is situated on an 82-acre site. Its capacity will reach up to 1,800 students and is scheduled to open in August 2016.
The property, which was formerly undeveloped farmland, was secured in 2012. Quality Testing and Engineering began geotechnical exploration at the site by drilling borings into the soil and profiling the natural soil type. The site provided complicated soils consisting of high-plastic clay soil across two-thirds of the building pad. Shallow groundwater was also a factor.
Quality Testing and Engineering is working with FGM Architects, structural engineering firm ASDG Inc., and civil engineering firm Neikirk Engineering.
“The team members understood the complexities that resulted from a challenging site,” says Mike Widman, president of Quality Testing and Engineering. “We worked together well and as a result, are now on schedule despite the hurdles that had to be overcome at the start of the project.”
Based on the size and locale of the construction site, lime treatment took place during the grading process. The team also deepened the footing excavations to access better soil below the surface. Due to the challenging excavation, the grading package started later than expected and then weather hindered the schedule.
“The grading for the building pad and outline of parking lot are mostly complete now,” says Widman. “The team is nearly halfway done with the footing excavations and is currently starting masonry work. Our main role now consists of construction material testing and observation.”
Material testing and observation services include fresh concrete testing, asphalt testing, mortar and grout testing and structural steel inspections. Quality Testing and Engineering communicates with construction manager McCarthy Building Company on a daily basis with the results.
“Our company is very excited about this project,” says Widman. “It is a privilege to be a part of such a large, local project that impacts the Mount Vernon community in Southern Illinois. It is another sign that the construction industry is improving. Positive effects are being felt across all trades involved in the construction process.”