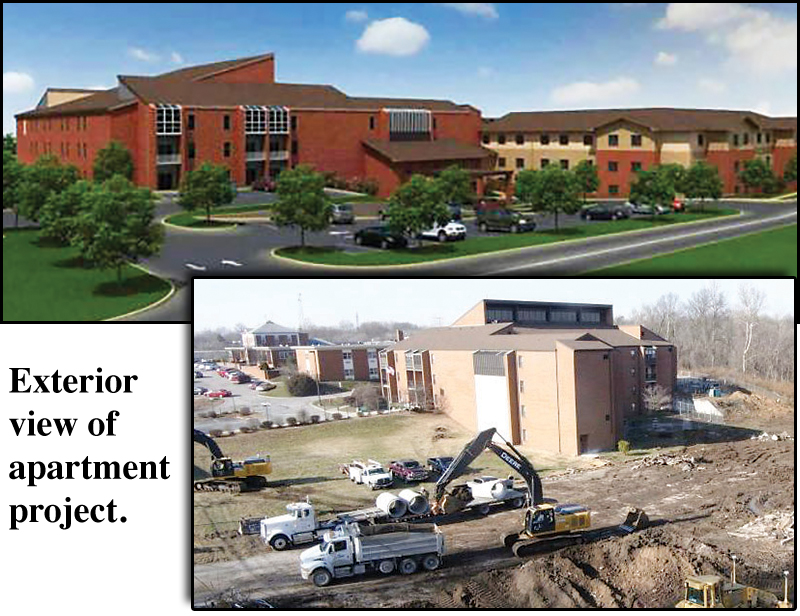 With a groundbreaking on a very chilly day in December 2013, work began on a $29 million expansion project to construct the new St. Paul’s Home and Retirement Apartments in Belleville.
The senior living facility offers a “person-centered” household design set in an environment to resemble home for each of its residents. It is scheduled to open this spring.
Jared Holland, P.E., lead geotechnical engineer and project manager for Geotechnology’s Fairview Heights branch office, assisted the project design and construction teams with geotechnical engineering/consulting and construction materials testing and observation during the development and construction phases.
“The geotechnical and constructability concerns at the site were those commonly encountered in the Metro East area: the potential for abandoned coal mines, urban fill, and soft near surface soils,” he said. While these may seem like budget-consuming obstacles for a project owner, they are fairly typical geotechnical-related concerns encountered in the Illinois area.
Abandoned subterranean coal mines are common in the area so an assessment was performed to review historical coal mine data, to determine mine locations, the extent of underground mine workings, and estimate what impacts the coal mines could have on the project site. The results of the study and a geophysical survey suggested an abandoned coal mine was likely not present.
The effects of earthquakes are considered in the design of buildings, and geotechnical engineers are often tasked with providing International Building Code seismic parameters based on the soil and bedrock profile in the upper 100 feet. A geophysical survey was performed to measure the shear wave velocity within the upper 100 feet of the subsurface.
“This provided a more favorable site class, and saved in construction costs” Holland explained.
“We had the opportunity to present the subsurface conditions to the design team, obtain their input as to what was important to the project, and then develop solutions to meet the project needs” he said. The value-based mitigation options, resulted in a cost savings in the site grading and foundation work.
St. Paul’s Home and Retirement Apartments joins a portfolio of projects the firm has completed in its 30-year history. Established in 1984, Geotechnology is a geoprofessional engineering firm which provides: geotechnical engineering, construction materials testing/observation, nondestructive testing, laboratory testing, geophysical, drilling, environmental engineering, and natural-resource services.