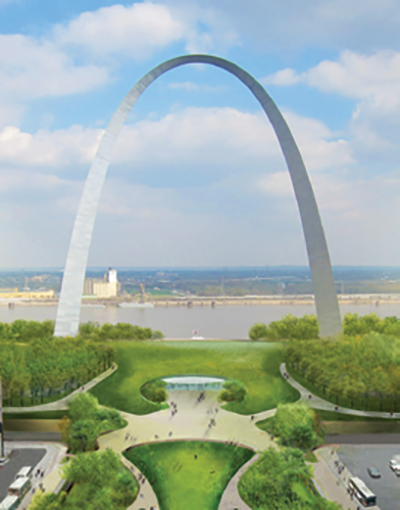 A major transformation is happening to Downtown St. Louis, and the firm of Crawford, Murphy & Tilly is leading what many deem to be “the project of the decade,” dubbed as the “Park Over the Highway” (POH) project.
CityArchRiver 2015, a civic organization whose mission is to celebrate the 50th anniversary of the opening of the Gateway Arch, joined forces with its own Foundation, the National Park Service, Missouri Department of Transportation, Great Rivers Greenway District, City of St. Louis, Metro (Bi-State Development Agency), Metro East Park and the Recreation District and Gateway Center of Metropolitan St. Louis to come up with a way to revitalize the Arch grounds and the city while making it more accessible and friendly to visitors. The vision of POH project was conceived.
Central to the POH project is a 280-foot land bridge expanse over the newly designated stretch of Interstate 44. The bridge connects pedestrians between the Arch and the Old Courthouse, via Luther Ely Smith Square. CMT’s design of this key feature mimics the shape of the St. Louis Arch with its trapezoidal shape and its “curved-end” effect. Architectural enhancements are further integrated into the design, as are landscaping elements such as 30-foot trees and 14-foot-high fills.
Along with the new I-44 “lid,” pedestrians will have two other points of access to the Arch grounds once all developments are complete. Other access points include a new Walnut Street Bridge and the conversion of the current Pine Street Bridge to pedestrian traffic only. The former Walnut Street Bridge, a mere 50 feet wide before, is being replaced with a 100-foot structure that includes a pedestrian walkway and the ability for traffic to flow in both directions. Extensive ADA accessibility enhancements are underway throughout the areas being developed.
Extensive measures are being taken to ensure preservation to the adjacent Old Cathedral and to minimize disruptions in the area from construction as well as from traffic flows.
Greg Law, engineer and group manager for CMT’s highways and bridges projects, said, “We are hopeful that access to the cathedral is even easier once this is complete.”
CMT’s estimated completion date for their part of this project is June 2015, with an estimated construction cost of $25 million.
MoDOT St. Louis District Engineer Greg Horn said, “By October 2015, traffic patterns are going to change drastically. This is the beginning of a big change for the city. It’s pretty exciting.”