LEBANON – The man behind the Mile High Thickburger is coming to McKendree University. 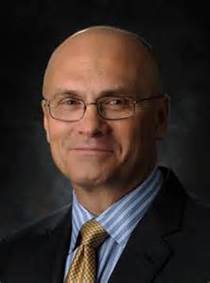 Andrew Puzder (shown left) is the CEO of CKE Restaurants, Inc., the parent company of the St. Louis-based Hardee’s Food Systems, Inc., the West Coast-based Carl’s Jr., Green Burrito and Red Burrito quick-service restaurants. The company currently owns or franchises over 3,300 restaurants in the U.S. and 28 foreign countries, generates $1.3 billion in annual revenue and, with its franchises, employs more than 70,000 people in the U.S.

He will talk about his business model and the company’s marketing on Wednesday, Oct. 8 at 6 p.m. at McKendree University, in Room 222 of Piper Academic Center. Puzder is a guest of the Wayne E. Lanter Lecture Series, which invites influential business leaders and entrepreneurs to share their insight and strategies for success. Admission is free and the public is welcome to attend.

An Ohio native, Puzder received a law degree from Washington University. From 1978 through 1991, he was a commercial trial lawyer at two major firms in St. Louis. He relocated to California to be the personal attorney for Carl Karcher, the founder of Carl’s Jr. In 1995 he became the executive vice president and general counsel for Fidelity National Financial, Inc., and assisted in the creation of the Santa Barbara Restaurant Group, where he was later appointed CEO. In 2000, he was named president and CEO of CKE Restaurants, Inc.

“Mr. Puzder is particularly interesting because he has an entrepreneurial and free-market view of job creation,” said Dr. Frank Spreng, director of the Lanter Lecture Series, who is professor of economics and director of the MBA program at McKendree. Puzder recently co-wrote the book “Job Creation: How it Really Works and Why Government Doesn’t Understand It.”

He has been a frequent lecturer at colleges and universities and a guest on several business news programs including “The O’Reilly Factor,” “Mad Money,” “Fast Money” and “Lou Dobbs Tonight.” In 2012, he served as an economic adviser and spokesman for Mitt Romney’s presidential campaign.