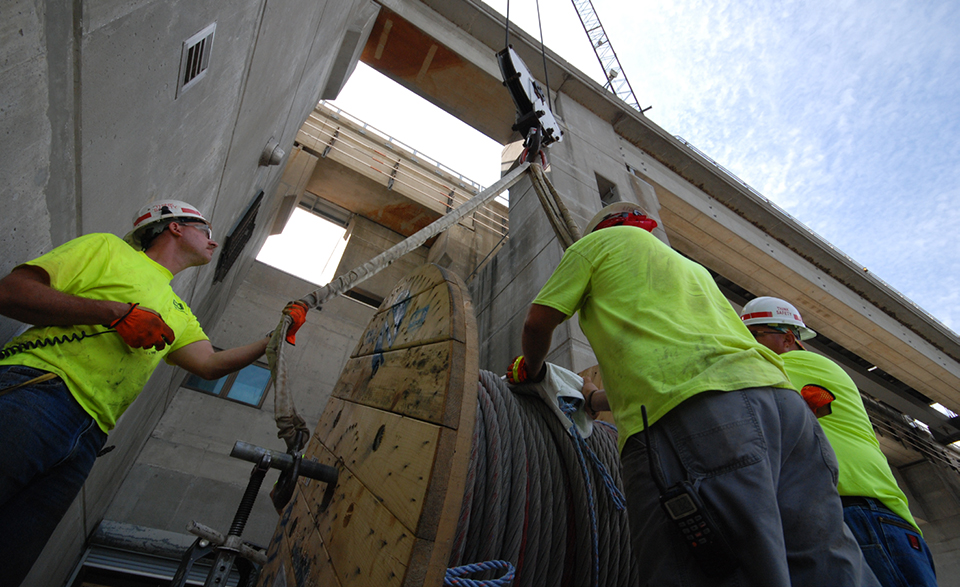 Illinois Business Journal report
A wide array of civic and government leaders took to the Chicago River in late September to voice support for greater federal commitment to modernizing Illinois’ lock and dam system to ensure its continued contribution to the state’s economic growth.
The Illinois Chamber of Commerce brought together business and labor leaders, representatives of manufacturing, agribusiness, and elected officials to explain why Illinois needs to be united in the push for greater investment in the waterway infrastructure. The Chamber and its Infrastructure Council released a new report, “Illinois Waterways — A Crisis Continued,” to highlight the dire condition of the system and the potential consequences of a system failure. The report is available at the Chamber’s web site, www.ilchamber.org.
“Shipping on our rivers keeps incoming materials cheaper, makes exported products globally competitive, helps lower congestion on our roads, reduces carbon emissions and supports thousands of jobs,” said Illinois Chamber President Todd Maisch. “But if we don’t invest in critical repairs and upgrades we will pay a huge cost very soon when the system ceases to function.”
The lock system is vitally important through Metro East, where both the Melvin Price Locks and Dam 26 in Alton and Locks and Dam 27 in Granite City are located. Each has been the subject of ongoing maintenance in recent years.
While Alton’s, at just over 30 years old, is among the locks in the best shape, most of Illinois’ facilities were built in the 1930s and need major repairs. Lock breakdowns are becoming more frequent, leaving billions in incoming and outgoing goods stranded, the report said. The closure of one lock can result in thousands of additional trucks on Illinois highways to move product, adding to congestion, cost and pollution, the report said.
The Chamber was joined onboard the Wendella boat “Linnea” on the Chicago River by U.S. Rep. Adam Kinzinger, U.S. Rep. Dan Lipinski and representatives of the Illinois Soybean Association, the Carpenters District Council, Ozinga Materials, and other organizations that understand the urgency for federal action.
“Recent passage of the federal Water Resources Reform and Development Act is a step forward, and Congress should be commended for their hard work on the bill,” said Maisch. “But if we don’t work together to push for funding for the projects, we will face a catastrophe in the near future.”
Maisch pointed out the unique unity that this issue created, saying, “Rarely do we see Democrat and Republican, city and downstate, labor and business, all speak with one voice. We are doing so today and the call to action is clear.”
The report cites crumbling locks along the river that could shut the entire system, idling factories and leading to crops rotting for lack of shipping capacity. Congress will need to provide annual appropriations to pay for the projects authorized, but has often come up short of living up to these commitment in the past, the report said.

More on local impact
U.S. Rep. Rodney Davis, R-Taylorville, and House Agriculture Committee Chairman Frank Lucas, R-Okla., came to Alton in mid-September to tour the Mel Price Locks and Dam with the U.S. Army Corps of Engineers and Col. Anthony Mitchell, the commander of the St. Louis District for the Corps.
Earlier in the summer, President Obama signed into law the Conference Report of the Water Resources Reform and Development Act of 2014. The legislation authorizes critical investments in Illinois priorities and will help better prepare the Illinois, the Midwest, and the country for extreme weather events like droughts and floods.
The Water Resources Reform and Development Act of 2014 will create a pilot program to improve the nation’s water infrastructure through public-private partnerships.
The Army Corps of Engineers estimates a $60 billion backlog of outstanding projects that will take decades to complete without outside investment. This provision is based on legislation that U.S. Sens. Dick Durbin and Mark Kirk introduced with U.S. Rep. Cheri Bustos, D-Ill., and local Congressman Rodney Davis, called the Water Infrastructure Now Public-Private Partnership Act. Durbin has said the pilot program is intended to help expedite projects – including lock and dam modernization along the Mississippi and Illinois Rivers – and save taxpayers money.
The bill would authorize a first of its kind study to help better understand how the Mississippi Basin functions as a system and how it can best be managed in order to maintain safe and reliable navigation and protect lives and property, especially during times of severe flooding and drought. The legislation would also improve tools used for Mississippi River forecasting and expanding flexibility for the Army Corps of Engineers to maintain navigation. It also creates a first-ever environmental management pilot program for the middle Mississippi River.