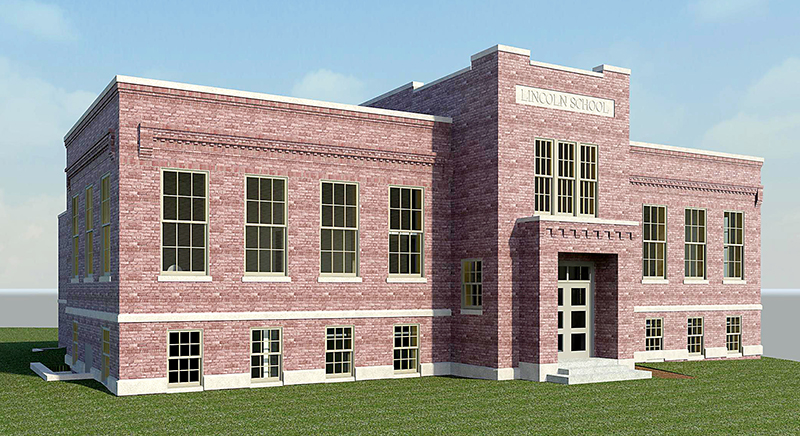 EDWARDSVILLE — Lewis and Clark Community College is set in October to start converting the historic Lincoln School in Edwardsville into the Mannie Jackson Center for the Humanities.
The goal is to finish construction by the end of 2015 and open to the public in January 2016.
“Lincoln School isn’t on the list of most important historic buildings in Illinois but it could be,” said Dale Chapman, president of LCCC. “It’s a very important and symbolic building for the community. The renovation will respect the legacy of the building but give it a new purpose as well, utilizing the humanities to bring together a more pluralistic and increasingly polarized society.”
According to Chapman, Lincoln School, in the 1200 block of Main Street, was the site of the first Madison County Courthouse, the site where Illinois’ second governor Edward Coles freed his slaves and where Abraham Lincoln once practiced law. From 1912 to 1951 it was used as a school exclusively for African-American students in the Edwardsville School District.
LCCC received a $250,000 grant from the National Endowment for the Humanities two years ago to catalyze the project. It was only the sixth, two-year college to receive the grant. As a matching grant, the school needed to raise at least $500,000 of its own but that hasn’t been a problem. In April 2012, former Edwardsville resident Mannie Jackson announced a donation of $200,000 and, since then, LCCC has raised $1 million more.
Jackson, now 75, was born in a boxcar in the tiny town of Ilmo, Mo. His family later relocated to Edwardsville and Jackson attended Lincoln School. He was a high school basketball star at Edwardsville High School and was recruited to play at the University of Illinois. He played for the Harlem Globetrotters after graduation but made his fortune as an executive with Honeywell. He later bought the Globetrotters and became the nation’s first African-American owner of a global sports and entertainment brand.
“Once Mannie heard about this endowment grant and this opportunity to be involved, he said he would provide a challenge gift,” said Linda Chapman, LCCC vice president for academic affairs. “We were holding a book signing for his book, Boxcar to Boardrooms, at the N.O. Nelson campus. It had been a wonderful afternoon. People were telling their family stories. Mannie stood up and he said he was going to contribute to this endowment and he challenged everyone in the room to do the same.”
When it’s completed, there will be conference rooms, reception rooms and breakout rooms with the aim of bringing in speakers and holding a variety of events, conferences and symposiums. With the N.O. Nelson campus also in Edwardsville, the Jackson Center is not expected to house classrooms, although Dale Chapman said they are considering a possible tie-in with a culinary/hospitality program that would lend itself to the function of the building. Eventually, he hopes to add an 800-1,000 seat conference center and possibly a hotel.
“Our original goal when we received the NEH grant was to raise the required match of $500,000,” said Lori Artis, vice president of media and foundation relations for LCCC. “With a small group of investors we quickly surpassed that goal and now find ourselves at $1.5 million raised to date for the program endowment which will help us provide the speakers, symposia, educational outreach, etc.”
The phase II fund-raising goal revolves around raising $1 million to build an endowment that will “fund a position/person to lead the Mannie Jackson Center for the Humanities,” Artis said. “We’ve had such a positive response in our requests to the community to help us champion this cause that our fund-raising continues, and I foresee it continuing beyond these current goals.”
Anyone interested in investing in the project or learning more about it can contact the foundation and schedule a visit from a development officer at
(618) 468-2011.

EDWARDSVILLE — Anderson Medical Group has announced that Dr. Jean Swearingen has opened a family care practice and is accepting patients at her office at 6616 Center Grove Road.
For information call (618) 659-1599.

An incorrect figure was used for the estimated total construction cost of the New Athens wastewater treatment facility improvements listed in the Engineering Round-up of our August issue. The figure is $3.02 million. Rhutasel and Associates Inc. is doing the engineering on the project. We regret the error.