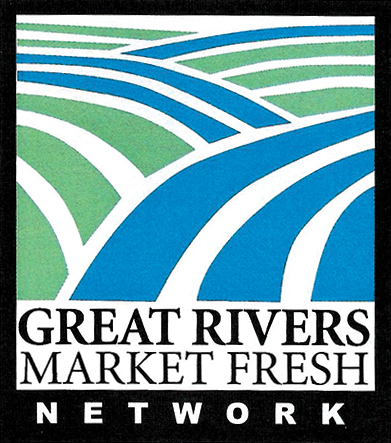 ALTON — A business group’s plan to link local food growers, buyers and entrepreneurs is getting thousands of dollars in community contributions and gardens full of support.
The Great Rivers Market Fresh Network, a nonprofit project of the still-new Alton Area Business Development Association, was officially launched in May after some three years of discussion.
The Market Fresh Network is setting up a food storage and distribution facility in the old Central Electric headquarters building at 415 Ridge St, with plans to get area farmers’ products into the hands of local buyers, including restaurants and individual consumers.
The Grass Roots Grocery, a separate, yet connected piece of the puzzle, is expected to open in the same building on June 7. It will serve as grocery in a  neighborhood where there has been none for many years. The grocery will be run as a cooperative and serve as the retail component of what’s to go on under the same roof. The building will become a base for food handling and certification classes
Everything is sprouting up just fine for the effort, which hopes to use the so-called “food hub” and commercial kitchen rental to finance a business incubator plan to grow business.
The first year looks pretty assured, after some $5,000 was raised at a kickoff in May, including a $1,000 contribution from Liberty Bank in Alton and an unexpected $1,000 check from Renee Johnson, an Alton woman who introduced herself as a “foodie” with a passion for the kind of work the network hopes to be doing.
“It’s the win-win we had hoped for,” said association member Ron Tanner, talking about the community support.
The fundamental principles of the concept are to leverage community assets, luring businesses that primarily support food, retail, hospitality and the arts.
“We want to grow existing businesses, incubate new ones, and keep them thriving,” said Tanner, who leads the association marketing efforts. “We want to attract new businesses and we all know to do that you have to attract new customers.”
Key to that will be the public/private partnerships that have driven the concept so far, he said.
The kickoff took place May 13 in the banquet room of the Veterans of Foreign Wars Post 1308 in Alton. The post’s kitchen was used for food prep. It’s one of several that will be used in the commercial kitchen rental plan that allows underutilized space to be rented by the hour or day, by entrepreneurs, existing businesses and others who have the need. The proceeds are divided between the kitchen owners and the new business network for use in its incubator program.
All of the food served at the kickoff came from local producers, to drive home the buy-local theme.
“We’re trying to get the producers and the users together. We can do that at the farmer’s market. A lot of people can get there, but there are others who can’t, and we hope to provide that connection,” Tanner said..
Three CSAs in the Alton market are getting behind the effort. The Community Supported Agriculture gardens — River Bend Roots Farms, LaVista and Three Rivers Farms — are all producing items that now show up at the Alton Farmers Market.
To sustain itself, the network figures it will need these numbers within a year:
– A minimum of 10 incubator clients, generating $150 a month, or $18,000 a year.
– A minimum of 45 hours per month of kitchen rental revenue, which would generate about $8,437 a year. Tanner thinks that numbers will be fairly easy to achieve. The Madison County Public Health Department fields a handful of related inquiries a week, he said.
– Marketfresh dues, $1,000. Dues from network supporters — 20 such individuals at $50 annually.
–  Alton Area Business development Association membership, $5,000 total.
The total amount, around $32,000, is not going to cover all the bills, he said, making it necessary to look for grants, gifts, angel investors and others.
“We have  be realistic,” Tanner said. “The food hub is not going to generate a lot of revenues for us, but it does complete the cycle. It gets residents, consumers and wholesalers all connected to the farms. And to this food idea, the hospitality, the tourism, the retail.”
The network has signed up its first incubator clients, Dr. Joan Stader and Charles Murphree, who have begun a company, BonafID Catch, which authenticates the origins of seafood.
Anyone wanting to learn more about the food hub project can reach the association by email, altonabda2012@gmail.com

Right email approach may be the link to your next customer

Snapshot of the Local Economy

Plight of Gen X’ers affecting all of economy, experts say