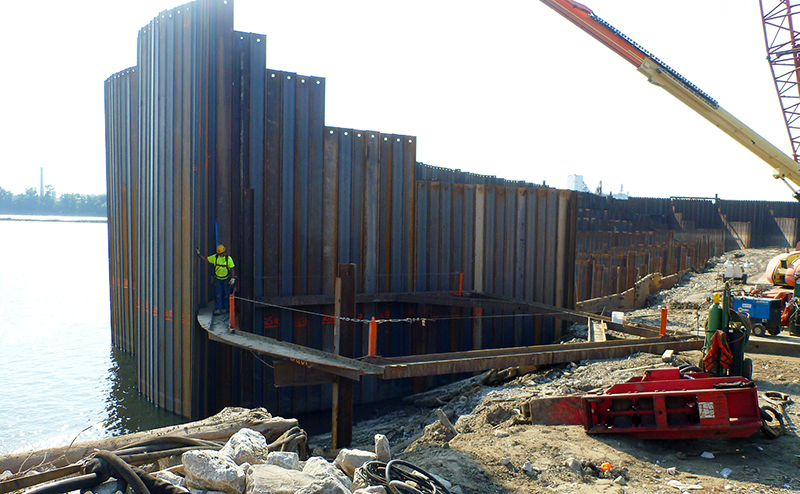 America’s Central Port will substantially increase its role as a national hub for freight movement when its South Harbor project is completed, officials say.
Construction of the harbor terminals began in mid-October and will conclude next summer, wrapping up  investment of more than $45 million at the Mississippi River facility in Madison.
The 1,200-acre mixed-use business and industrial park is owned and operated by the Tri-City Regional Port District. The South Harbor terminals are the second phase of a multi-phase project that began almost four years ago.
The new phase will include completion of a high-capacity conveyor system that will be used for loading river barges with commodities brought into the port via truck and rail. Those commodities are mainly goods like corn and soybeans.
Port Executive Director Dennis Wilmsmeyer said the location of the harbor south of Locks 27 in Granite City provides a unique opportunity for efficient cargo movement.
With the new southern access, the port will become the Mississippi River’s northernmost, lock-free port. The port’s current main harbor, the North Harbor, is upstream of Locks 27 and all barge traffic using that end of the port must lock through to get downstream. Having the South Harbor will be smoother sailing, Wilmsmeyer said.
“Putting us south of Locks 27 takes that (inconvenience) out of the equation; we’ll no longer have that lock to contend with in the movement of products down river,” Wilmsmeyer said.
The South Harbor work will set the stage for growth, he said.
“We are seeing that certain freight commodities want to come to St. Louis,” Wilmsmeyer said. “The South Harbor will enable us to shift some freight from our North Harbor and use both harbors to meet this growing need for the region.”

The port’s chief barge operator, SCF Lewis and Clark Marine, will have its fleet positioned in such a way that barges can be filled. emptied or moved fairly quickly. SCF Vice President Paul Wellhausen said his company worked alongside staff at the port district on the design of the South Harbor terminals. The company moves about 2.5 million tons of product and unloads about 20,000 railcars at the port district annually.
Some of SCF’s barge fleet is anchored in the northernmost reach of the St. Louis Harbor, which makes it closer to the South Harbor of America’s Central Port.
Wellhausen likened the relationship his company enjoys with the port to a partnership that he expects to grow with time.
“This South Harbor is located below Locks 27 and that’s a big deal, a big deal from the standpoint that it takes time and it costs money to transverse through Locks 27. We will be more competitive with the entire St. Louis region, being here at the South Harbor,” Wellhausen said.
The overall project will afford several advantages, he said.
“First of all, this facility will consist of both rail and truck dumps. The truck dump will be totally enclosed and it will also  have the capability of handling hopper-bottom trailers as well as dump trailers. That’s a big deal for this marketplace also,” Wellhausen said.
Tied with the new railroad loop, the facility will have the capability of taking grain directly from rail and truck to barge, but it also will have two 100,000-bushel storage tanks on site that will allow goods to be held for multi-modal shipments.
“This facility will be able to meet the demands of what the marketplace asks for and will have those types of flexibilities going forward,” Wellhausen said.
The conveyor system is rated for 50,000 bushels an hour. “We’ll be able to load a barge in less than two hours. Again, that’s very cost effective,” he said.
Madison Mayor John Hamm, who is a commissioner on the port board, said the South Harbor work represents the most expensive construction project the port has undertaken since it was established in 1959. During the October ground-breaking ceremonies, Hamm referred to the project as  “a vision of 25 years.”
“From the city of Madison’s standpoint, a lot of good things came from this. We got a $500,000 Homeland Security grant,” Hamm said. “We’re actually going to have a fireboat anchored in the harbor to support up and down the river and work with the port authority.”
The port district has been big for the region’s economy. Frank Miles, who is now administrator of Madison County Community Development, was business development manager at the port when an economic impact study was done a couple of years ago. That study showed a $282 million annual impact for Madison County, and that was before the start of the South Harbor project, he said.
The port has created more than 1,000 jobs and generates $9.6 million annually in state and local taxes, Miles said.
“The port is generating $2.5 million in property taxes through the tenants here — mostly on property that was formerly owned by the U.S. government, and that (otherwise) would have generated no property taxes.”
The vision of former U.S. Congressman Jerry Costello who helped get the former Army depot property transferred to the port district is starting to become reality, Miles said.
The state government has also been clearly supportive of port development. Last year, the Department of Commerce and Economic Opportunity offered a $4 million matching grant to one offered by the federal government, toward the South Harbor.
Ellen McCurdy, senior policy adviser at DCEO, spoke at the October ceremonies.
She said the state’s investment is part of the Illinois Jobs Now! capital program and is part of a goal to get the state to compete internationally in trade.
“This South Harbor project will enable America’s Central Port to increase global competitiveness and continue Gov. (Pat) Quinn’s efforts to make Illinois the inland port to the nation,” McCurdy said.
The U.S. Army Corps of Engineers had to sign off on the construction of the South Harbor. The new terminals are being constructed by Korte-Luitjohan and TWM Engineers.
The new cargo opportunities will help generate an additional 10 to 15 jobs at America’s Central Port.
“Job creation is a focal point of the Port District and Madison County, and that is one reason the two have worked so well over the years,” said Alan Dunstan, Madison County Board chairman, in a statement. “This new investment will mean construction jobs, and retained and new jobs to operate this facility. But that’s not the end; the port’s vision is to attract new companies and development to invest in the property, utilize these assets and become good, new corporate citizens of our communities.”

Utility customers may get breather again this year, Ameren says