ALTON – Steaks cooking on the grill, pops of shotguns, barking dogs, flowering trees on rolling hills of green – these are the things that make the Alton Memorial Hospital Health Services Foundation’s Duck Pluckers, Deer Skinners & Fish Hookers Ball one of the best parties in town. Most importantly, $80,000 was raised at the April 26 event to purchase another new ambulance for the AMH fleet.

Each year a crowd of 400 “Pluckers” converge on Nilo Farms near Brighton decked out in waders and camouflage. They gather in a huge tent with tables uniquely decorated by “Sportsman Hosts.” In addition to the many hunting and fishing themes, there were beautiful arrays of fresh-cut spring flowers. One table defied the season and celebrated those famous deer we usually see in December; Dasher, Dancer, Prancer and friends.

An archery competition promised a $100 bill to whoever could hit it at 70 yards. Marksman Mike Farrell nearly hit Ben Franklin right between the eyes. The Homer Clark Quail Flush Championship drew a large crowd as teams took aim at clay birds. Top scorers Jason Bowman and Shane Liley were awarded engraved silver champagne buckets and a bottle of bubbly.

After an obligatory rain shower, guests feasted on a sumptuous steak dinner cooked onsite by top chefs from area BJC hospitals. Mike Harman led the live auction, which included a yellow Lab puppy, a hamburger lunch via airplane to the city of your choice, and an appearance on the season premiere of “Gags to Riches” filming in Calhoun County.

“It was another great year for the Duck Pluckers Ball, thanks to the hard work and dedication of Marlene Lewis and Jeanne Truckey (of the AMH Development Office),” said Duck Pluckers committee chairman Mark Maggos. “With the help of our sponsors, auction donors, attendees and volunteers, we were able to raise more than $80,000 for another Duck Plucker ambulance. We might have the only camo-decorated ambulances in the country, but what really makes them special is the community support that goes into each one of them.”

As the sun set and the Glendale Riders took the stage, Billy Bob hats and teeth were spotted on the packed dance floor. A huge bonfire near the lake took the chill out of the night air.

“This great event has put five state-of-the- art ambulances on the River Bend roads, transporting nearly 23,000 people for emergency and life-saving care,” said AMH President Dave Braasch. “We are thankful to the many generous donors that attended.”

Below, from left, Tricia Pytlinski, Jennifer Gottlob, Leslie Rynders and Lori Artis sit on the back of one of the new Alton Memorial Hospital ambulances purchased through funds raised at the annual Duck Pluckers Ball, held April 26 at Nilo Farms in Brighton. 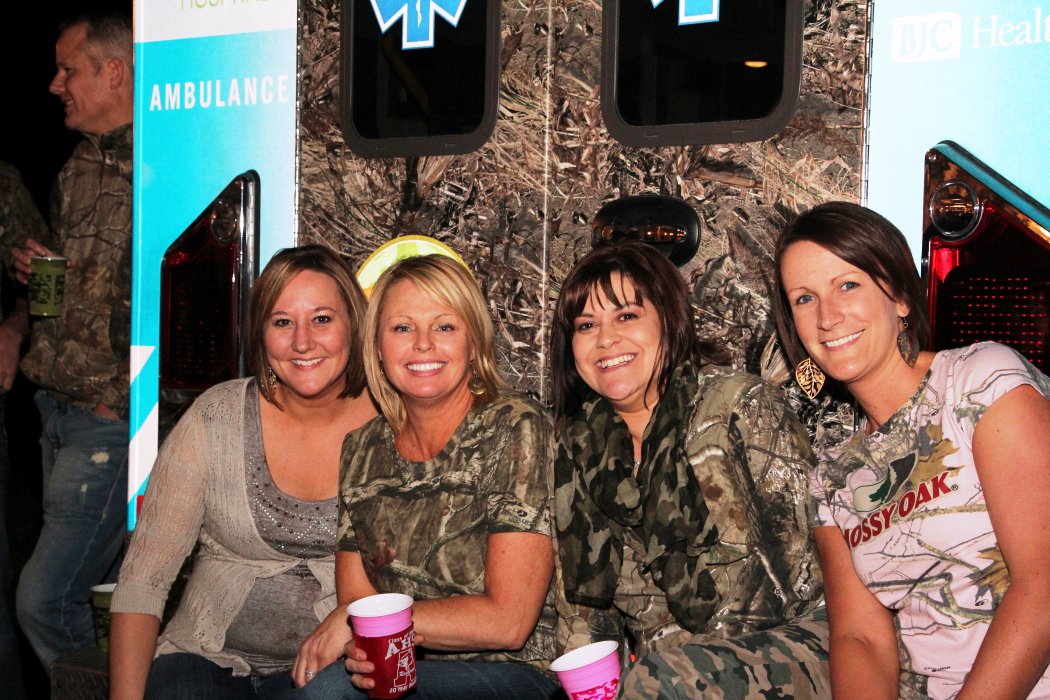