FAIRVIEW HEIGHTS – A crowd of more than 350 gathered Thursday evening at the Leadership Council’s Salute to Southwestern Illinois Awards Dinner to honor and pay tribute to Scott Air Force Base.

Those in attendance celebrated the tremendous impact Scott Air Force Base has had on the region over the past decade.

The event was held at the Four Points by Sheraton. KMOX News Anchor and Reporter Carol Daniel served as emcee for the evening, while Lindenwood University-Belleville served as the patron sponsor.

Scott Air Force Base was recognized for attracting new missions and construction dollars and strengthening its presence in Southwestern Illinois. Today, the base is a $3.2 billion economic engine for our region. The vital role Scott plays in our nation’s defense was also showcased, as the Leadership Council honored several of the individual missions at Scott AFB and the men and women behind them.

“With a workforce of 13,000, Scott Air Force Base represents the largest employer in Southwestern Illinois and the 4th largest in the St. Louis region,” said Dennis Wilmsmeyer, President of the Leadership Council, at the event. “In total, almost 140,000 people economically benefit from the base each year, underscoring the critical role it plays in our regional economy, while also playing a vital role in our nation’s defense. Our neighborhoods, communities and region are better because of the base and the people who work there. We are privileged to have Scott Air Force Base in our community and are delighted to honor them this evening.”

The Leadership Council’s Annual Salute to Southwestern Illinois program salutes those individuals and organizations that have displayed outstanding leadership and have positively impacted our region. For more information, visit www.leadershipcouncilswil.com. 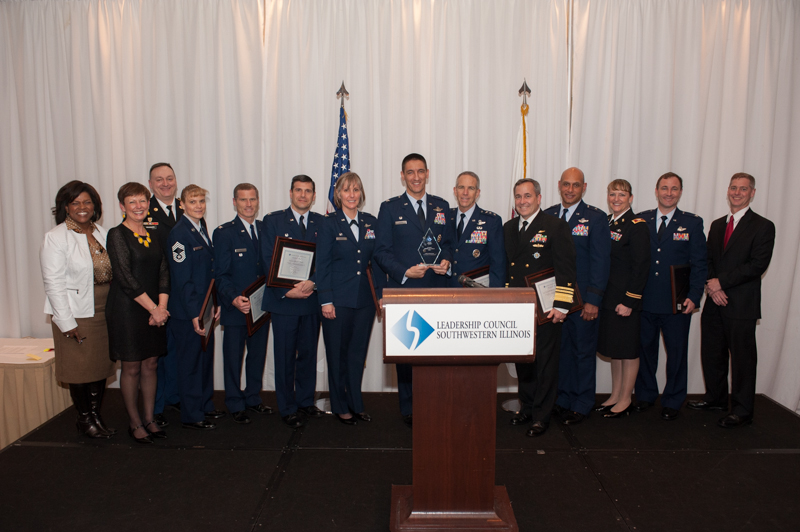