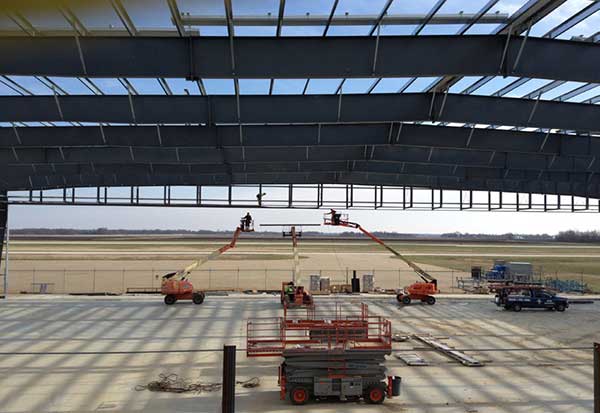 By KATE GENO
West Star Aviation is working with Contegra Construction Co. to expand its existing 250,000 square feet of facilities at St. Louis Regional Airport in East Alton. Construction began in October on a $5 million, 40,000-square-foot airplane hangar.
The new hangar will accommodate up to six planes at one time; the Gulfstream 5 will be the largest plane to fit in the space. It will be used to customize the interior design of private and corporate planes. West Star installs custom features such as wood paneling, cabinetry, leather upholstery and entertainment systems.
Designed by David W. Dial Architects PC of Manchester, Mo., the hangar forms a U-shape that allows four planes to park on the sides and two in the front. Six workstations accompany the planes’ parking slots and contain compressed air, water and high voltage electrical outlets to test the engines.
The hangar, which will be complete in April, was constructed with a Butler Manufacturing building system. The system consists of 220-foot metal frames that span the entire width of the hangar. The benefit of this system is no interior columns are needed, which allows for maximum use of the space for the aircraft. The entrance is a 210-foot moving door for convenient access. Contegra utilized three cranes on-site to erect each metal frame.
Attached to the structure is a 12,000-square-foot, two-story office area for West Star Aviation employees and a 5,000-square-foot accessory repair shop.
The facility is located next to the airport runway and connects to West Star Aviation’s existing building.
“Since the building sits right next to the runway, safety was a prime consideration during the construction process. Our team worked closely with the St. Louis Regional Airport to coordinate the position of the cranes, to control access to the tarmac, and to keep any debris from entering the runway,”
said Project Manager Jason Prewitt.
West Star Aviation specializes in airframe repair and maintenance, engine repair and maintenance, major modifications, interior refurbishment, paint, parts, window repair and accessory services. This was a first-time partnership between West Star and Contegra.