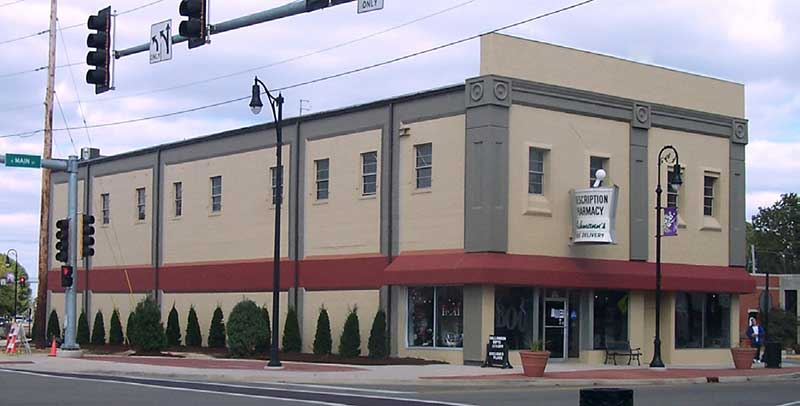 By ALAN J. ORTBALS
Uptown Collinsville has been undergoing a transformation in recent years and one of the tools the city has used to accomplish it has been the Uptown Structural Rehabilitation and Façade Grant Program made possible by tax increment financing.
The program provides matching grants to building owners and/or tenants as appropriate. The funds can be used for a wide variety of building improvements from roofing and electrical upgrades to new façade treatments, lighting and signage.
Participation in the program has grown since its inception, according to Leah Joyce, the city’s Uptown coordinator.
“The momentum of the program is exciting,” Joyce said, “it’s interesting to watch when one business makes improvements to their building, it spurs others around them to do so, too.”
One of the recent users of the façade grant program was Ashmann’s Pharmacy at 209 E. Main St. The rerouting of Illinois Route 159 caused the demolition of an adjoining building and put the pharmacy in a more prominent position. Owner Lenny Locus used a combination of IDOT compensation, an Uptown grant and his own funds to make his century-old building look like new.
“Such major improvements to that building, combined with our other upcoming projects in that area, will significantly increase the surrounding property values, draw more customers to the existing businesses and attract private developers to the remaining vacant storefronts,” Joyce said.
Joyce gives a lot of the credit for Uptown’s transformation to the city’s ongoing streetscape projects. The first two were on Main Street. The third, around City Hall, will be completed this year. And the fourth, Main Street east of 159, will start in 2016. The streetscape program includes repaving the streets, installing new sidewalks with handicapped accessible ramps, burying the utilities and adding decorative light fixtures with LED bulbs, trash cans and benches.
“Streetscape Phase Four is the one that’s most exciting for me,” Joyce said. “In many ways it seems like Main Street east of 159 feels cut off from the rest of Uptown. It literally has crumbling sidewalks and historically there have been some really undesirable businesses down there. With the demolition of the UMB Bank, the visibility to the area from 159 is tremendous. All of the undesirable businesses have now closed and a few of the buildings are on the market. With the recent redevelopment of Ashmann’s, coming streetscape improvements, and the completion of the three pocket parks along 159 this spring, things are really coming together to build that area up and allow us to attract new developments.”