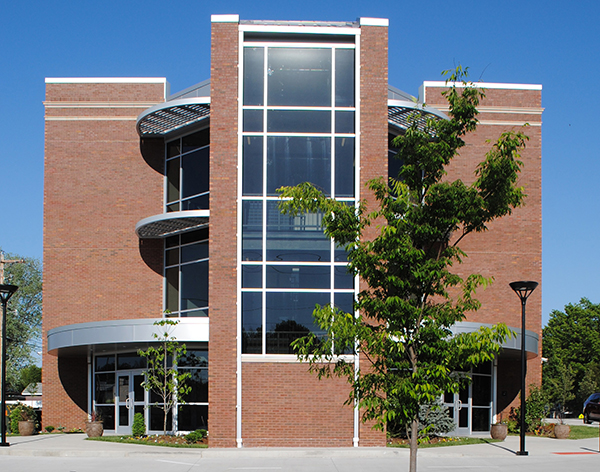 St. Clare Catholic School in O’Fallon, Ill., needed to expand its facilities to accommodate an increasing student enrollment. To reduce costs, a $4.5 million upgrade and addition was chosen rather than an all-new school. EWR Associates, Inc. architects of Fairview Heights was responsible for the project design.
The original school building was erected in 1929. The client’s objective for the new 19,000-square-foot addition was to make it complementary to the original design.
“We took the same proportions and style and modernized them,” says Bill Reichert, president of EWR. “The stone and brick façade and window openings are similar to the existing building. We altered the scale and added sunshades at the new west entrance to create a contemporary twist to the exterior design.”
The three-story addition features five new classrooms, a science lab, state-of-the-art library and computer lab. Pre-K and kindergarten classrooms were incorporated into the school from their former location across the street. Music, which was housed in a temporary classroom modular building, was brought into the school. A new office, main entry, elevator and two updated ADA restrooms are also included in the layout.
For the original school building, the exterior masonry was cleaned and restored, three classrooms and two offices were renovated, and a walkout level was added to the basement to increase accessibility. Existing restrooms were recaptured for added education spaces. Fire safety entrances and exits were rearranged and new security and sprinkler systems were installed.
The school grounds were also improved. EWR redeveloped the playground and added on-site parking for events. Additional green space was planted on the perimeter of the building to eliminate water runoff, reduce heat island effect and add character to the site. A new pickup and drop-off lane increases the students’ safety.
Holland Construction Services began work in June 2012 and completed it in time for the school to use the new addition for the 2013-2014 school year.
“The building committee, which consisted of members of the St. Clare, St. Nicholas and Corpus Christi parishes, was one of the most outstanding clients we have had the opportunity to work with,” says Reichert. “The decision making and design support was truly collaborative.”
The O’Fallon Chamber of Commerce presented St. Clare School with one of its 2014 Beautification Awards for transforming its building and grounds into one of the most visually pleasing school settings in the city and preserving a historical downtown landmark.