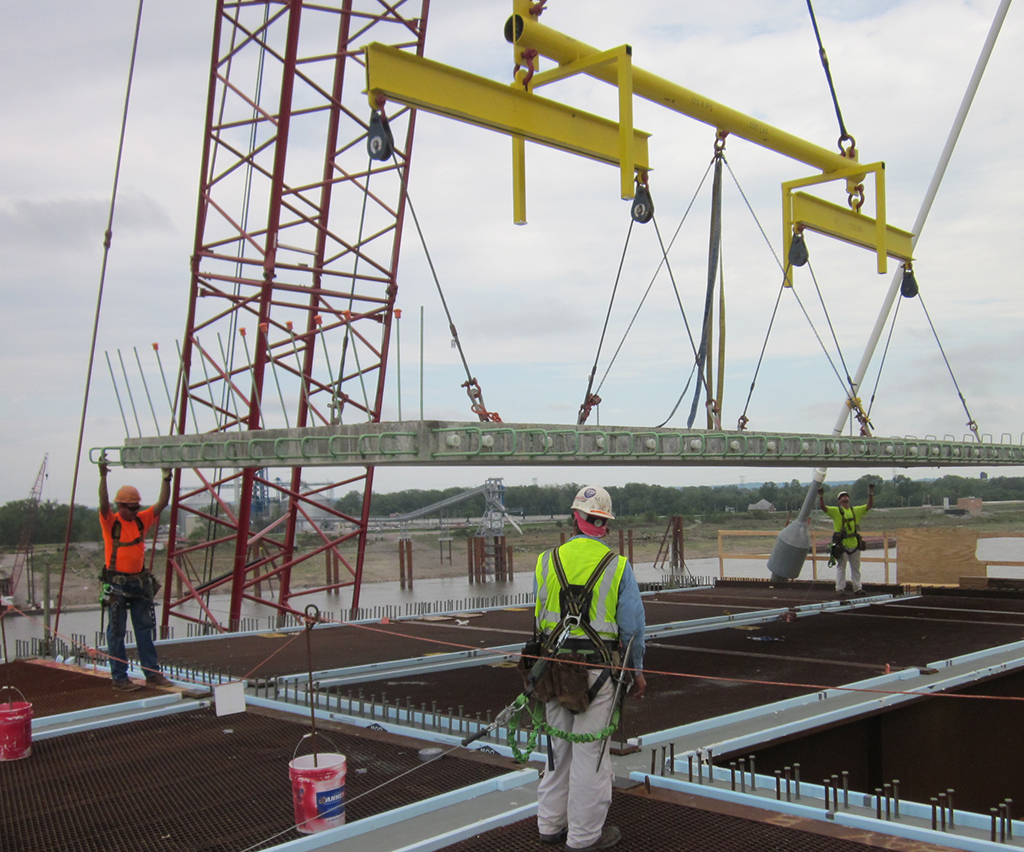 A big reason that the $660 million Stan Musial Veterans Memorial Bridge complex is being delivered on time and on budget is due to labor, according to Terry Nelson, executive secretary-treasurer of the Carpenters’ District Council of St. Louis and Vicinity.
“The construction unions worked together with IDOT and MODOT and the general contractors,” Nelson said. “Everybody worked as a team and I think it worked out fabulous. We got along great. There were no problems on that job that I can even point to in terms of jurisdiction or lateness, strikes or anything of that nature. Everything went extremely well.”
Union workers contributed nearly 1.75 million man-hours in the construction of the entire project. All of that work went so smoothly in large part due to Project Labor Agreements that were worked out between the parties up front, according to Jeff Church, project implementation engineer for the Illinois Department of Transportation’s District 8 in Collinsville.
“The prime contractor and all the subs and the unions signed the PLA,” said Church. “The unions agreed that there would be no work stoppages and the PLA set out a grievance process to be followed in case there were any conflicts between the various unions. That way, any conflicts that might have arisen could be resolved quickly without delaying the project.”
Church said that an important consideration on the project was minority and female participation. He said that the federal goal for this region for minority participation was 14.7 percent and for women it was 6.9 percent. He said that minority participation exceeded the goal, ending up at 22.7 percent while female participation fell slightly short at 5.7 percent.
“We had regular meetings with all our prime contractors and the unions and looked at where we were relative to the participation goals; where we were falling short; where we were doing well; and where we could improve,” Church said. “I think that helped a lot. The prime contractors and the unions worked with us to make sure that we were all on the same page, where we were and where we needed to go. Overall we think we did very, very well.”
One might think such a massive project would require a massive workforce but that wasn’t the case. Church said that they had estimated that there would be an average of 150 full-time construction workers on the Illinois-side jobs on a daily basis through the four-year project period. That estimate, he said, turned out to be pretty close with employment peaking at about 200 workers during the latter part of last summer.
The number of workers reflects changing methodologies in the construction business, according to Nelson.
“If we had built that bridge 20 years ago it would have taken five times as many workers,” Nelson said. “The way we’re doing business today with the technology and the prefabrication, if the construction spending increases, it doesn’t mean that the man-hours increase. Look at the slabs that were used for the roadbed, for example. They were all prefabricated off site. We brought them in and set them. That’s all we did. Picked them up off the barge, set them, bolted them in and moved on to the next one. And that is a major change from the way things used to be built. Right or wrong, I just know this. A job that 10 years ago took 10 carpenters, the same job today would take just six carpenters because of the technology changes.”
While there was plenty of fighting and arguing between the states prior to the project, ultimately, that all went by the wayside.
“I think this bridge was a great accomplishment on everybody’s part,” Nelson said. “I think it’s a gold star for the region. And it was great the way MODOT and IDOT got along and Missouri and Illinois got along with each other. What we can do jointly is just amazing. I think this bodes well for the future.”