As the Mississippi River Bridge project went through design and construction, a common concern among drivers was that the new bridge fixed part of the problem.
A bigger problem was the flow of traffic between the Congressman William L. Clay Sr. Bridge (commonly known as the Poplar Street Bridge) and Interstate 55.
“We’ve always considered the new I-70 bridge as one part of the overall solution to congestion heading from Illinois into downtown. We knew that once the new bridge opened, we had to make some improvements to the Congressman Clay Sr. Bridge to improve traffic flow,” said Randy Hitt, Mississippi River Bridge Project director.
At nearly 50 years old, the Congressman Clay Sr. Bridge needs significant preventative maintenance to keep it in optimal condition. That includes the ramps to and from the bridge, which need to be replaced as part of on-going roadway maintenance. The existing ramps, especially those between the bridge and I-55, are very tight and require traffic to slow to below interstate speeds.
Since the ramps need to be replaced, the Missouri Department of Transportation wants to make sure that it makes as many improvements to the flow of traffic as possible during this work to improve the flow and safety of the traffic coming across the bridge. To minimize the impact to traffic, the department wanted to complete the new bridge and then make the necessary changes to the Congressman Clay Sr. Bridge. 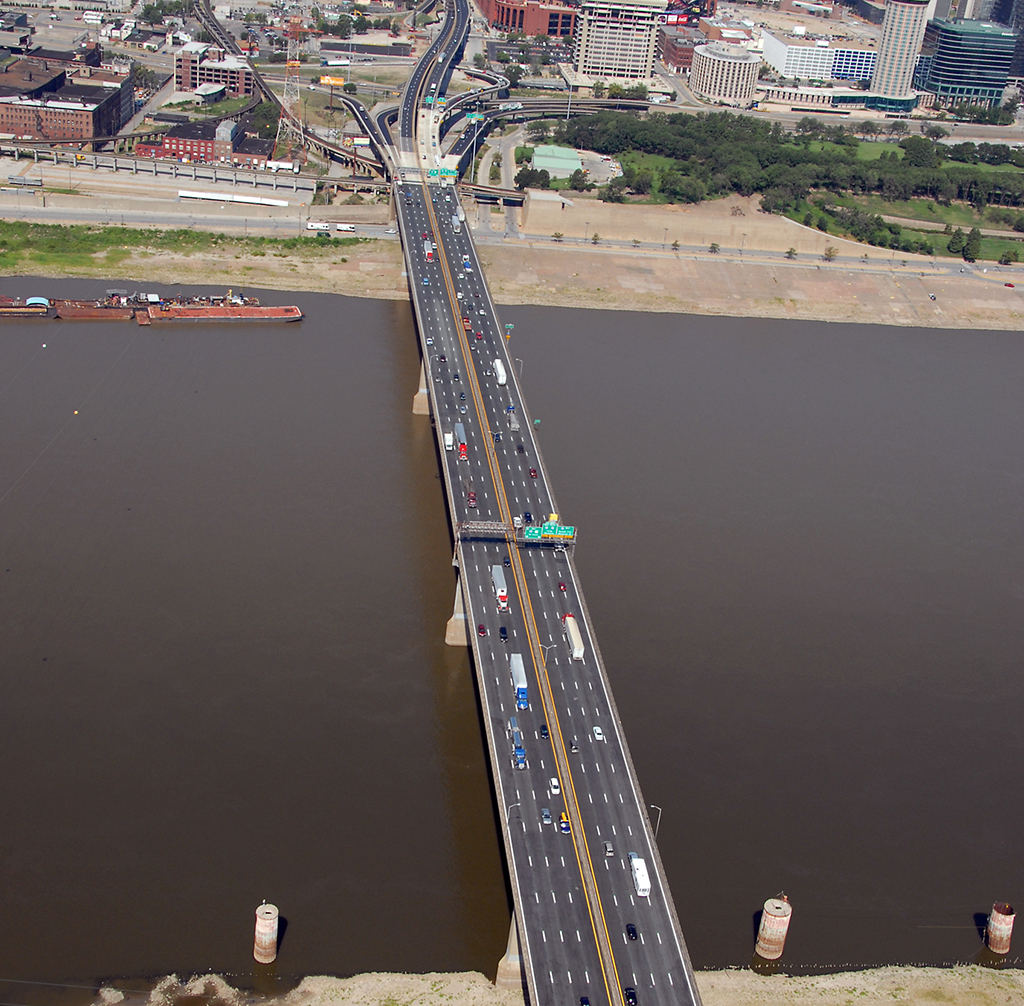 Design work for this is currently underway and will be completed early this year.
“We have worked hard with the Illinois Department of Transportation and regional leadership to come up with the optimal solution that benefits the region, and meets as many traffic needs as required. We know what the solution is, but putting that solution into effect will impact many of our daily commuters.  We want to work with them so they understand their options and impacts during this major improvement project,” said Hitt.
MoDOT is replacing three of the four ramps between the Congressman Clay Sr. Bridge and interstates in downtown St. Louis. The fourth ramp – from existing eastbound I-70 to the Congressman Clay Sr. Bridge – must be removed to make room for the safety improvements to another ramp.
Construction includes:
– A two-lane ramp from the Congressman Clay Sr. Bridge to existing westbound I-70 (which will become eastbound I-44 after I-70 moves to the new bridge). One lane will lead to Walnut Street, which is being rebuilt in early 2014 as part of the CityArchRiver2015 project. One lane leads to eastbound I-44. This is scheduled to start in mid-2014.
– A two-lane ramp from the Congressman Clay Sr. Bridge to southbound I-55. This will be built in 2015.
– A connecting ramp, built by IDOT, from the Martin Luther King bridge to westbound I-64 in East St. Louis. This will give a direct connection to Illinois Route 3. This is scheduled for 2015.
– A two-lane ramp from northbound I-55 to the Congressman Clay Sr. Bridge. Construction of this ramp will include work to add another eastbound lane on the bridge and to extend the ramp from 6th Street across the bridge to Illinois Route 3. This work is set for 2016-2017.
Andrew Gates is Mississippi River Bridge Project public relations coordinator.