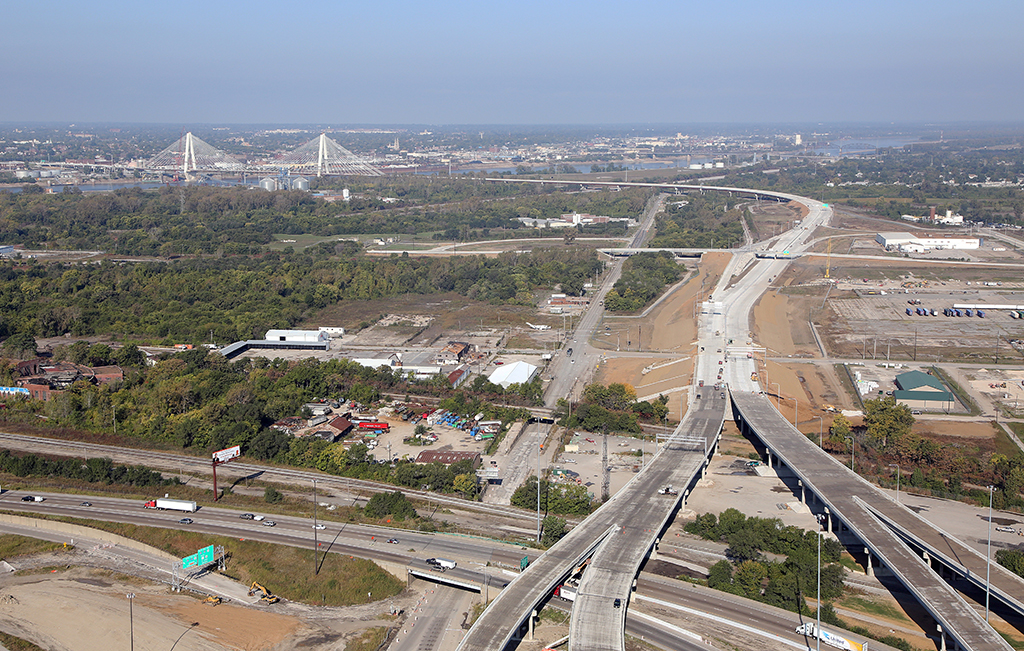 As you’ve driven west to St. Louis over the last four years — whether on Interstate 55/70 or I-64 — it’s been hard not to see Keeley & Sons of East St. Louis hard at work. That’s because the company has played such a huge role in the construction of the various components of the New Mississippi River Bridge project on the Illinois side.
Keeley, in partnership with Keller Construction Co., built the Illinois approach from St. Clair Avenue (Illinois Route 3) to the new bridge. Keeley also built the Ninth Street bridge over I-64, the 15th Street bridge over I-64, the relocated eastbound and westbound I-70 bridges over First Street, the relocated east bound I-70 ramp bridge to eastbound I-64, the relocated eastbound I-70 ramp bridge to northbound I-55, the pavement tie-ins for all the eastbound and westbound relocated I-70 ramps to I-64 and I-55, and the mainline I-55 and I-64 changes for the relocated I-70. Keeley workers have been at it since August 2010.
While the Stan Musial Veterans Memorial Bridge is the eye catcher, most of the cost of the project was located on or over dry land. Gary Wenkel was Keeley’s project manager on the Illinois approach from St. Clair Avenue to the new bridge.
The Illinois approach to the bridge is elevated half of the way from where it splits from I-55 to the new bridge — a distance of more than two miles. Wenkel said that the approach was supported by 15 sets of piers on each side — eastbound and westbound. Because this area is essentially old riverbed made up of silt and clay, it was necessary to drill down each of these piers more than 100 feet to reach bedrock and root them 18 to 20 feet into the rock. Much of this work took place out of view of the traveling motorist. Soil conditions weren’t the only obstacle to be overcome, according to Wenkel.
“Our biggest challenge was that the Illinois approach goes over 16 sets of active railroad tracks and we had to deal with four different railroads,” Wenkel said. “We had to coordinate all our work with the railroads in order to work within their rights of way. On days when we set steel girders over the railroad tracks, one flagman from each of the railroads had to be on site while we were working. Before a girder could be set in place on a pier, we had to get the flagman’s approval to lift the girder over the railroad tracks.”    Keeley & Sons specializes in heavy highway construction, piling, shoring, asphalt materials and asphalt surfaces and has extensive experience in the field. Working in such a highly trafficked area can pose some unusual challenges, according to Wenkel.
“Setting girders, forming and pouring bridge decks and wrecking the deck forms over the lanes of traffic where I-64 and I-55 come together was a challenge,” Wenkel said. “One additional issue that added to the challenge was that IDOT restricted the times when we were allowed to close traffic lanes while the Cardinals were playing at home. We knew that some of the forming and wrecking operations would have to be performed at night during off-peak traffic periods. However, when the Cardinals were in the playoffs last fall, there were nights that we were prohibited from closing traffic lanes until after the game was over. All closures had to be removed by 5 a.m. the next morning.”
Wenkel said the most workers he had on the Illinois approach site at any one time was just 25 to 30 for a big deck pour, and 20 was more the standard work crew.
“A lot of our work was repetitive, moving from one pier to the next,” Wenkel said. “The piers were identical. They may have been a little bit taller or a little bit shorter but, when you get a good crew that knows what they’re doing, you just move from one pier to the next.”
The Illinois approach consumed 4.8 million pounds of rebar, 11.8 million pounds of structural steel and 8,600 cubic yards of concrete.